There are many aspects of this particular journey that are different than my other long walks – the Appalachian Trail, Pacific Crest Trail, Benton MacKaye Trail, and others.

One of those is what piques my interest today. Generally, I have walked each trail once, in a single direction. By contrast, we have now actually traveled the length of the Oregon Coast trail three times! We’re staying in the same Sea Crest Motel in Port Orford where I made my last post a week ago! Let me explain with a brief recounting of our week’s itinerary.

On September 7, we walked out of this motel just at 11:00 a.m. and made a second stop at the Food Co-op where we bought delectables for the next few days – dried mangos and pears especially! We walked another half mile to Ray’s Food Place to wait for the Coastal Express bus for an hour ride south to Gold Beach, arriving at another Ray’s in Gold Beach a little after 2 p.m.

It was just a short walk down 5th Place and past the local airstrip to the beach. Soon, we caught sight of Cape Sebastian where we would leave the beach. I made sure to let my family, and grandson Sebastian, know we’d be hiking there! Clouds hovered over its distant peak, suggesting a lurking dragon, a suitable intrigue for a three-year-old. 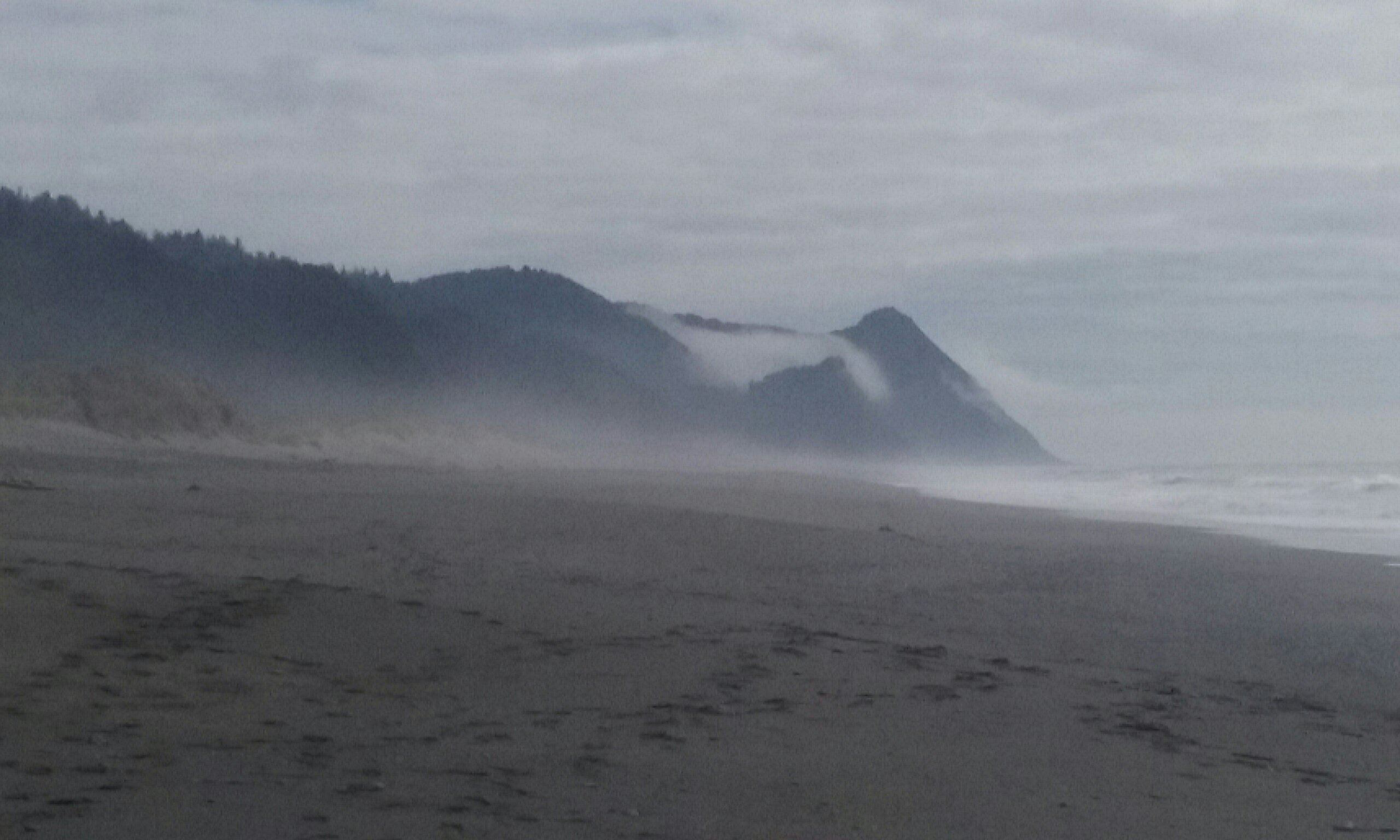 There’s a dragon up there for sure!

We reached the base of Cape Sebastian in under three hours, after walking Gold Beach, suitably named for its treasures of tiny agates mixed in with the array of smoothed pebbles. Finding the post marking the trail up the cape presented another treasure hunt. I had pulled out my binoculars to find it almost hidden in the grass. 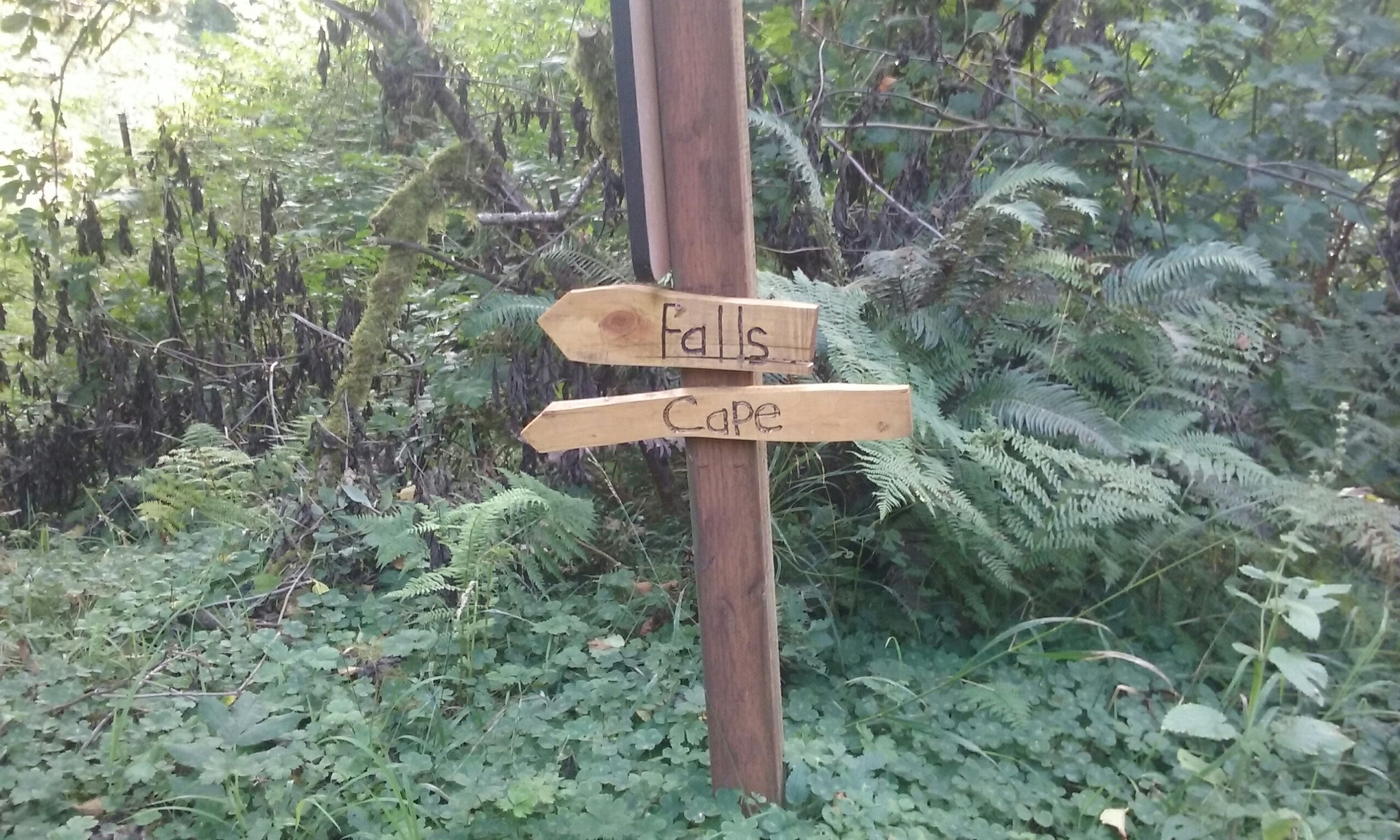 Just on cue at 1.7 miles we found the “good spot for a bivouac” noted in Bonnie Henderson’s Day Hiking Oregon Coast. It was only 6 p.m. but we didn’t think we’d find a better campsite, so we stopped! The site also included a view with a bench. Watching the setting sun reflecting on the ocean, I reveled in sketching and painting my view of Cape Sebastian. The ground, softened by a spruce needle cushion provided a luxurious resting spot for the night. 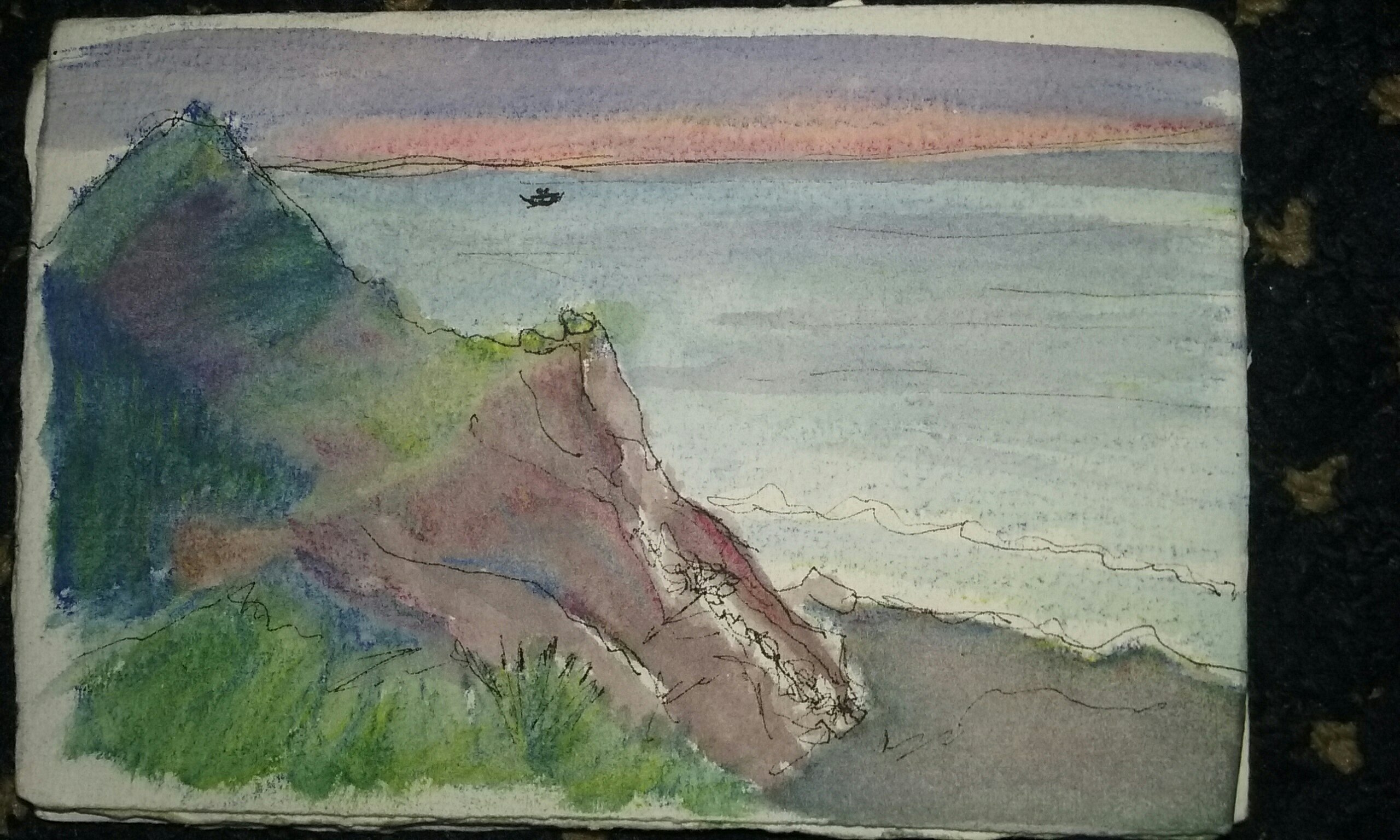 Sunday, September 8th offered walks through three habitats. First, we completed the 5-mile traverse of Cape Sebastian, through the majestic spruce-hemlock forest, along the cliffs of convoluted rocks at the base of the cape, then down an eroded ramp, scaled with a rope, to regain the beach. All my senses were nourished, from the carpeted texture of the path, the scents of spruce, the vibrant colors of shrubs, mushrooms, and even the beautiful and threatening poison oak, to the sonorous quiet with muffled surf in the background. 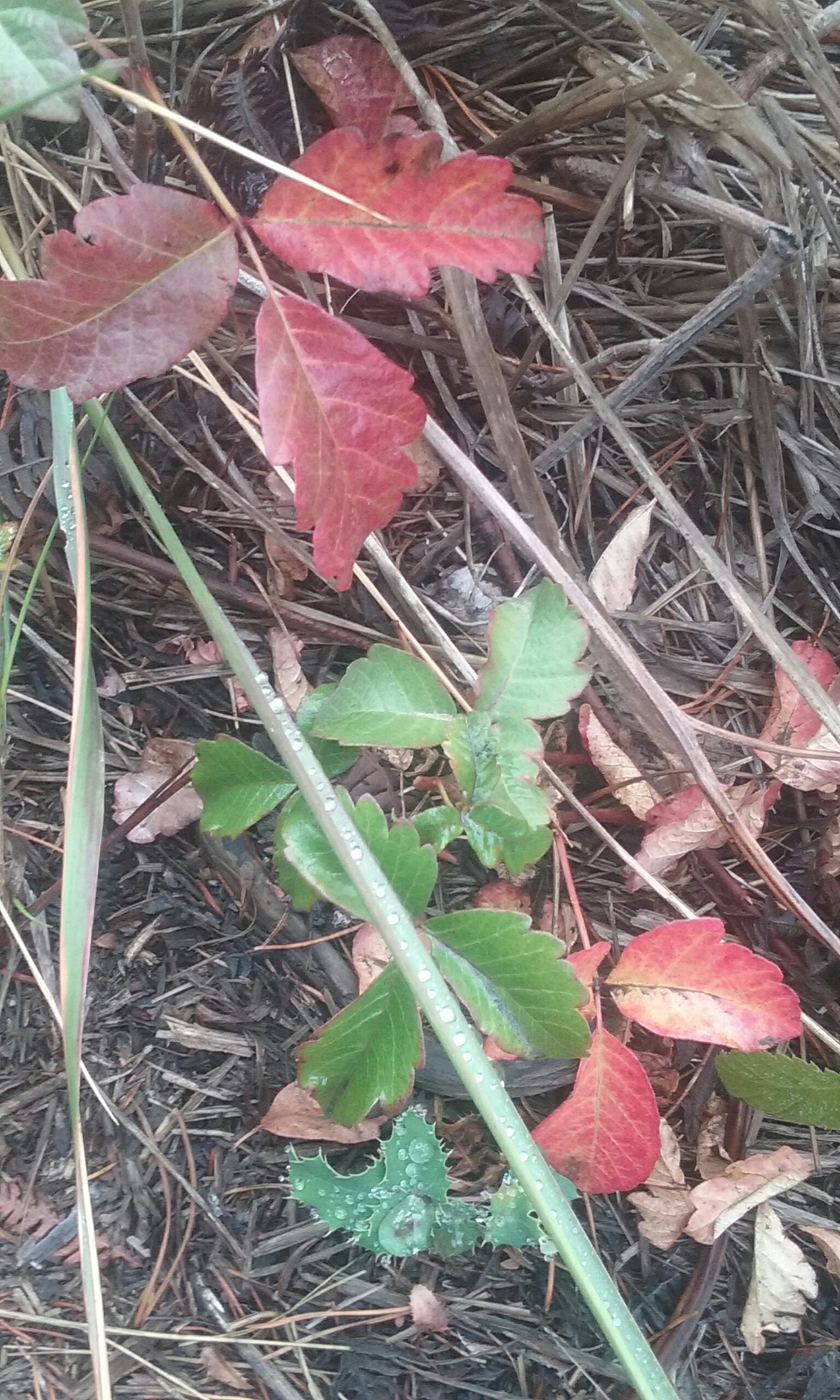 Next, we did some roadwalking to cross the wide Pistol River on a bridge, then re-entered the forest for our third habitat of the day. A beautiful and thoughtfully preserved stretch of coast called the Samuel H. Boardman Scenic Corridor welcomed us hikers with a good 16 miles of trail that followed the ins and outs of the coastline, up and down from road to beach and from road to bluff’s edge. 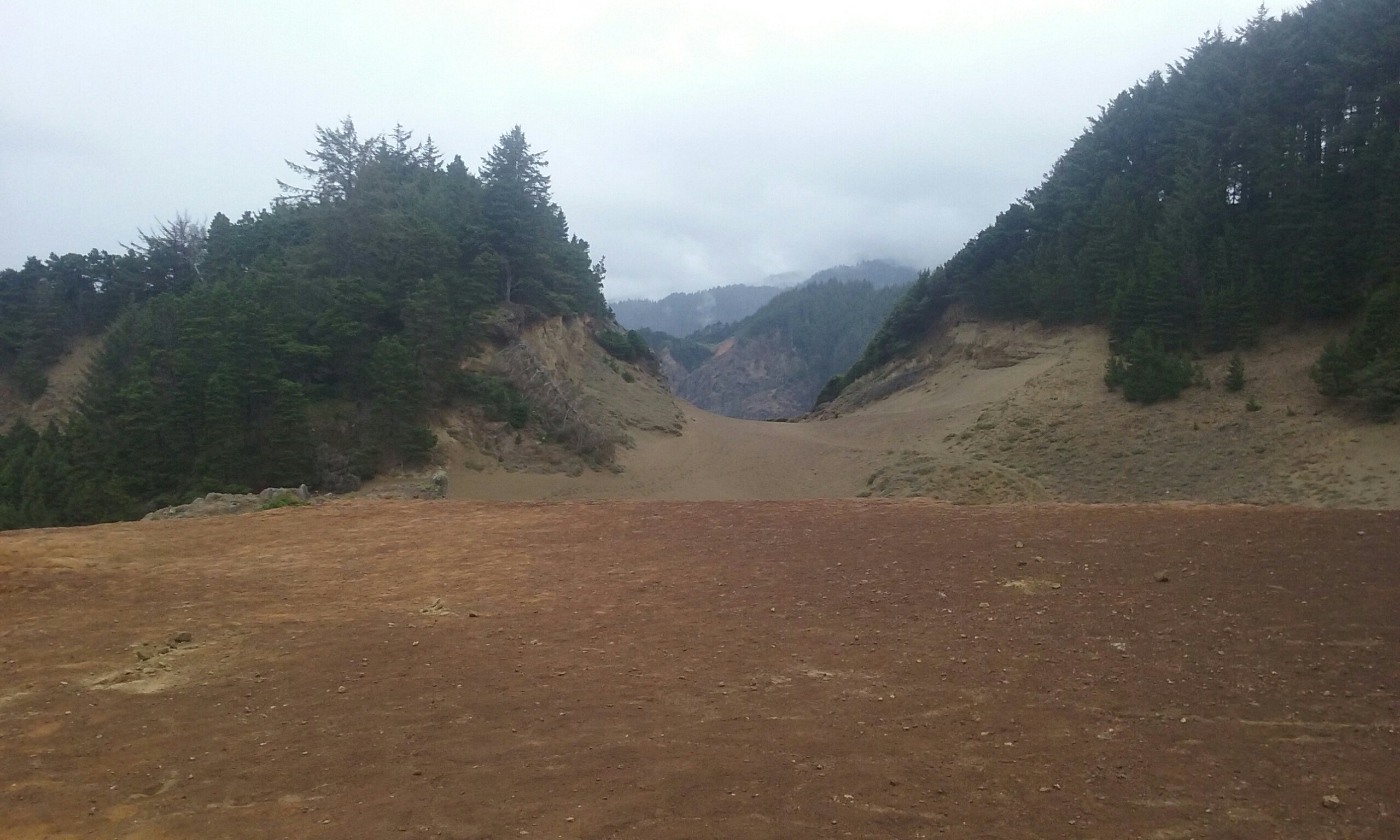 One spectacular section of the Samuel Boardman Scenic Corridor was Indian Sands, a dune atop the bluff

We knew we would be camping along the trail that night, even though no official camping is available. We had started looking for a flat spot. The steep, thickly vegetated forest offered none.

Just before dusk, we reached a feature called “Secret Beach”. We had read that it might be a place to camp. Two things negated that for us. First, there was the tide. I didn’t think I would sleep well on the narrow beach listening to the surf, worrying that it would inundate my tent! Secondly, we realized this beach was not secret at all! There was a well-used trail leading away to the road! The first people we had met on the trail all day were here! It was a wedding party taking pictures! The bride was deftly clambering up the bank, gathering folds of her white dress around her arm.

We hiked on, back up the bluff. Our willingness to move on was rewarded with the discovery of a cleared viewpoint, just big enough for our tiny tent, within twenty minutes south. We had a scenic view directly above Secret Beach that was safely distant from the surf. We slept well, even as the first drops of rain started falling during the night. 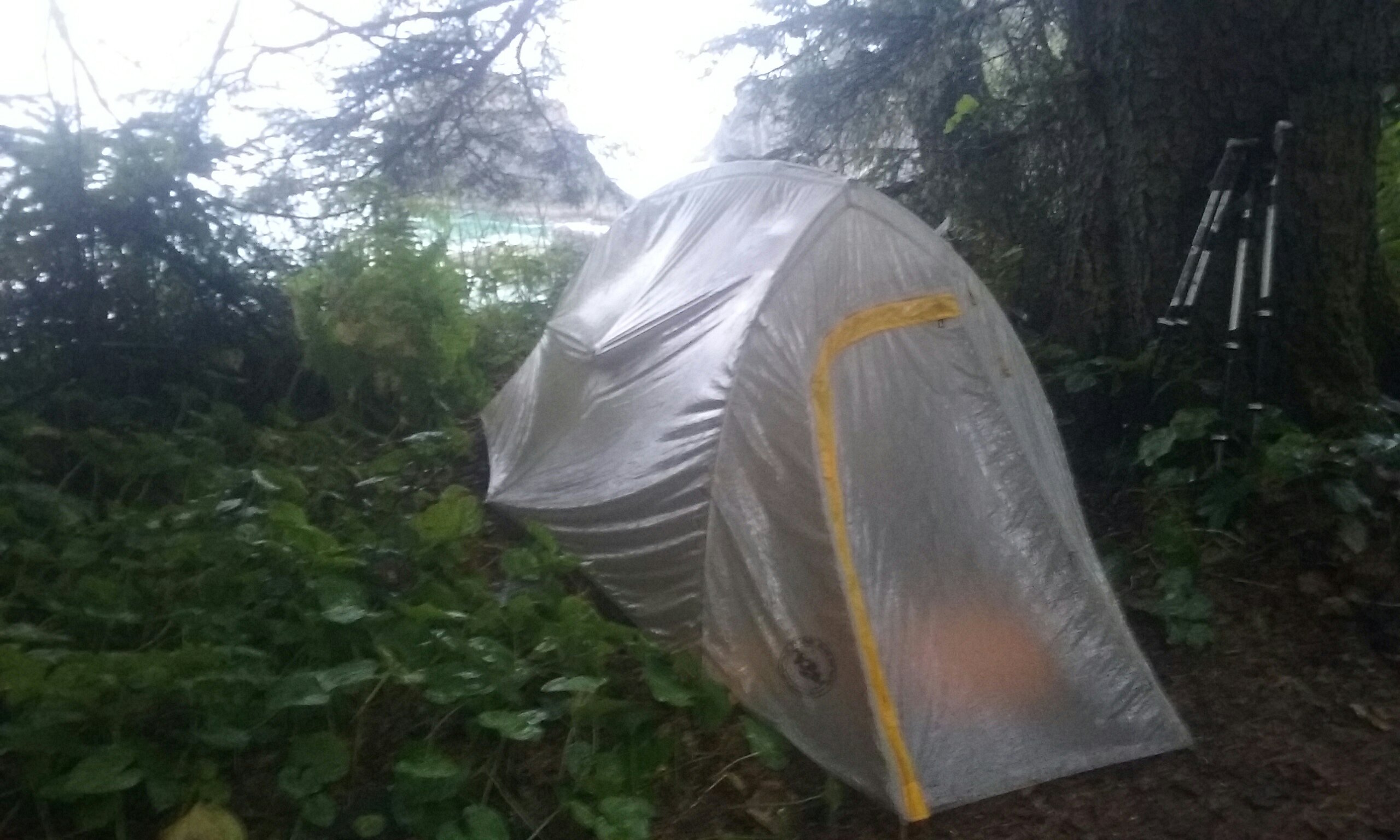 On Monday, September 9th we walked through the forest of the Samuel H. Boardman Scenic Corridor during our first full day of rain. This would also be our last day of trail walking! In short, it was a fulfilling day of beauty, with rain adding a particular touch of refreshment.

Late in the afternoon, we left the forest, learning on a plaque that Samuel Boardman was the founder of the Oregon State Parks system. What a fitting honor that this wondrous corridor had been dedicated to him on the eve of his retirement from the Parks!

A short road walk led us to Brookings, connecting to a welcome bike path for our last mile to our day’s end at Harris Beach State Park. We easily found the registration kiosk where we paid to stay at the Hiker-Biker site, grateful that the Oregon State Parks provide special sites for campers without cars.

In the morning on September 10th, John made a few calls to locate a nearby car rental place. We had just one more leg to walk to reach the California state line, the official southern terminus of the Oregon Coast Trail. What he came up with was the plan to continue walking 2 miles south into downtown Brookings, catch the northbound bus 100 miles to Coos Bay, rent a car there, drive north to Fort Stevens to retrieve the “Old Gold Van”, drive back to Coos Bay to return the rental car, then drive back south to walk that last bit of the trail. Got it?

Well, that’s what we did! By 3 p.m. on Tuesday, we had taken our hundred-mile bus ride, watching ten days’ walk melt before our eyes and rented a 2019 Chrysler Pacifica van. By 8 p.m. we had retraced another two weeks’ walk and checked into the same campsite where we had slept on our very first night at Fort Stevens, completing two traverses of the trail in 28 days – and 7 hours!

Next morning, on September 11, with somber reverence for the day, we drove around the corner to the protected lot where the Old Gold Van had been parked for a month. We knew we’d have to jump start the battery. Opening the hood revealed that a month had given a couple of mice ample time to get comfortable there. They wouldn’t leave!

In an hour, we were headed south, driving separate vans, John in the mouse van. The next two days were focused on our third traverse of the Oregon Coast Trail! This time, we stopped at certain spots we had missed on foot:
*The Tillamook Creamery
*Back road to Netarts, Sand Lake, and Pacific Beach
*The hike on the Harts Cove Trail on Cascade Head
*Elk Viewing Area in Reedsport
*Seven Devils Beach
*Bullards Beach and the Coquille River Lighthouse

Midway through the day, just before the side trip to Seven Devils Beach, we stopped in Coos Bay to shop for food, fulfill John’s official interview call for his seasonal job at Anza-Borrego Desert State Park, and return the rental car. No mouse sightings had occurred. Maybe John’s laying of dryer sheets throughout the van had driven them out. Maybe they were now moved into Wax Myrtle Campground where we had stayed the night before.

What impressed me with this part of the journey was how quickly we had covered the trail by car, yet how shallowly we had experienced the true nature of the coast this way! The road rarely gave us views of the beach where we had so deeply connected to the surf, the sand, the rocks, the sky during our walk. By car, each of the stores, trailheads, and road stretches that had been such vital landmarks for us while walking, were insignificant blips along the road!

After a short visit to the Coquille River lighthouse, which we had glimpsed from Bandon Beach on Day 12 of our walk, we hopped into the Old Gold Van together and drove to Port Orford, destined for a second stay at Sea Crest Motel and watching the Democratic Debate. Twelve days of walking evaporated in forty minutes of driving, my mind quickly reviewing the rich details we had relished by walking!

Which brings me to the present day of September 13, a lucky Friday for me, being one of those people lucky to have the 13th as a birthday. We were lucky to get to stay in a hotel with an ocean view and to have that be one night before the full moon! At 4 in the morning today I watched the moonlight shining on the ocean. At 6 a.m. we watched the full orange moon set into the western ocean horizon. Time rolls continuously, like the surf, but I’ll end this post here! Stay tuned for our next, and final episode of our Oregon Coast Trail saga – touching the California State Line at Crissey Field State Recreation Site.