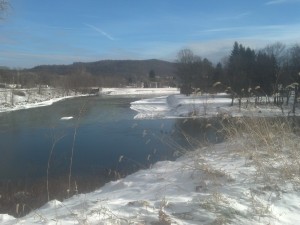 I looked up from my map, wondering “Where IS that trail? I’ve got to get going so I can meet my hiking partner!”  I’ve been doing car support for him as he walks the Great Allegheny Passage Trail in Pennsylvania.

Next thing I knew, he was standing there beside me, already finished for his day’s walk, and wondering where I had been!

“I couldn’t find the trail! Where did it go!”

Where it went was NOT the way I had been sure it would go. At that moment, I realized that this was a perfect example of how an Old Victim Story works in my life. Follow along and see if this makes sense to you……….

What I had been doing is being so sure that the trail went over the dam of the nearby lake that I was not even looking at the detailed map that showed the route. Instead, I started walking the way I thought the trail SHOULD go. I followed a gravel path part way up the dam. It came to a dead end. I was puzzled and came back. THEN I was willing to look for the truth, where the trail actually went. But, then, it was too late. John was already there, wondering where I had been while not meeting him on the trail.

Old stories seem like that! When I’m projecting my limiting beliefs onto my situation, onto the people in my life, onto my plans and my future, I’m making assumptions about everyone and everything AS IF IT FITS WHAT I’M THINKING IT SHOULD BE! When I’m “being in My Story”, I’m often ignoring what’s actually happening, and what actually can be that I miss my true path, and miss relating with people I love!

Here’s an example of how I WOKE UP to one of my old stories.  I was working at the Native Plant Garden while studying Radical Forgiveness, Making Room for the Miracle.  I was learning about stories and “Projection”. Up until that moment, I had believed that my colleagues never included me in planning, and if they did, they wouldn’t listen to my ideas. Pretty simple.  It was ALWAYS LIKE THAT!

It turned out that when I really LISTENED  to the actual words they were saying, instead of the voice in my own head, they were actually saying,”Who else has an idea? Regina, what do you think?” And when I shared my idea, they said,  “That’s a great idea, Regina! Let’s do that!”

I was stunned. My Story wasn’t true! Pretty amazing!  I wondered how many other times I had been so sure what other people would say and do, that maybe I didn’t even hear what they had actually said, OR I had made what they said mean whatever my limiting belief was – I’m not good enough, or I don’t matter, or they don’t like me, etc.

That’s the way Old Stories work, in my life anyway!

I played with acronyms – to help me remember how powerful Stories can be. Please comment below on this.

Would you say that an Old Story could be a

It’s a made up way of looking at something when what I really want is bottled up inside so deep that I can’t even allow my world to have it be true.

Would you like to learn how to bust your own stories?  Would you rather sustain your own repressed yearning or feel fulfillment,

Join me in Journey to YOUR Heartland, coming up in February!