Breakfast at a kitchen table in an antique New England home, described by the owner as “a great place to have lots of visitors”, was a sumptuous respite from the trail. Our treat for breakfast was smoked salmon from yesterday’s Whole Foods shopping, an English muffin, a banana, and coffee brewed in our host, Mark’s, glass brewer that looked like it came from a chemistry lab.

Easing into conversation with Mark and Dianna, we started looking at Dianna’s pictures of their family of three adult daughters, two spouses, and a boyfriend. The grand finale was a video of their eldest daughter’s wedding dance, a whimsical swing dance with moves the new couple had practiced for this gracious performance. I had fallen in love with their family!

Still, we had the trail to walk so we tore ourselves away and loaded up our packs in Dianna’s car for our shuttle to the south side of the Connecticut River. “It’s always impressive to be living a day that’s been anticipated for a while. This is one of those days! For weeks we’ve been wondering how we would be negotiating this river crossing. And now, we’re actually doing it!” I mused as we drove through the neighborhoods, past the Dinosaur Tracks site, over the river bridge, to the boat launch where we could touch the water. Dianna narrated with historical and geological anecdotes and facts.

Within twenty minutes, we were walking in woods again.

This section rose gently and smoothly up 700 feet over a couple of miles to a popular Day hike site called Goat Peak. There’s a fire tower there and a 360 degree view of the CT River Valley. 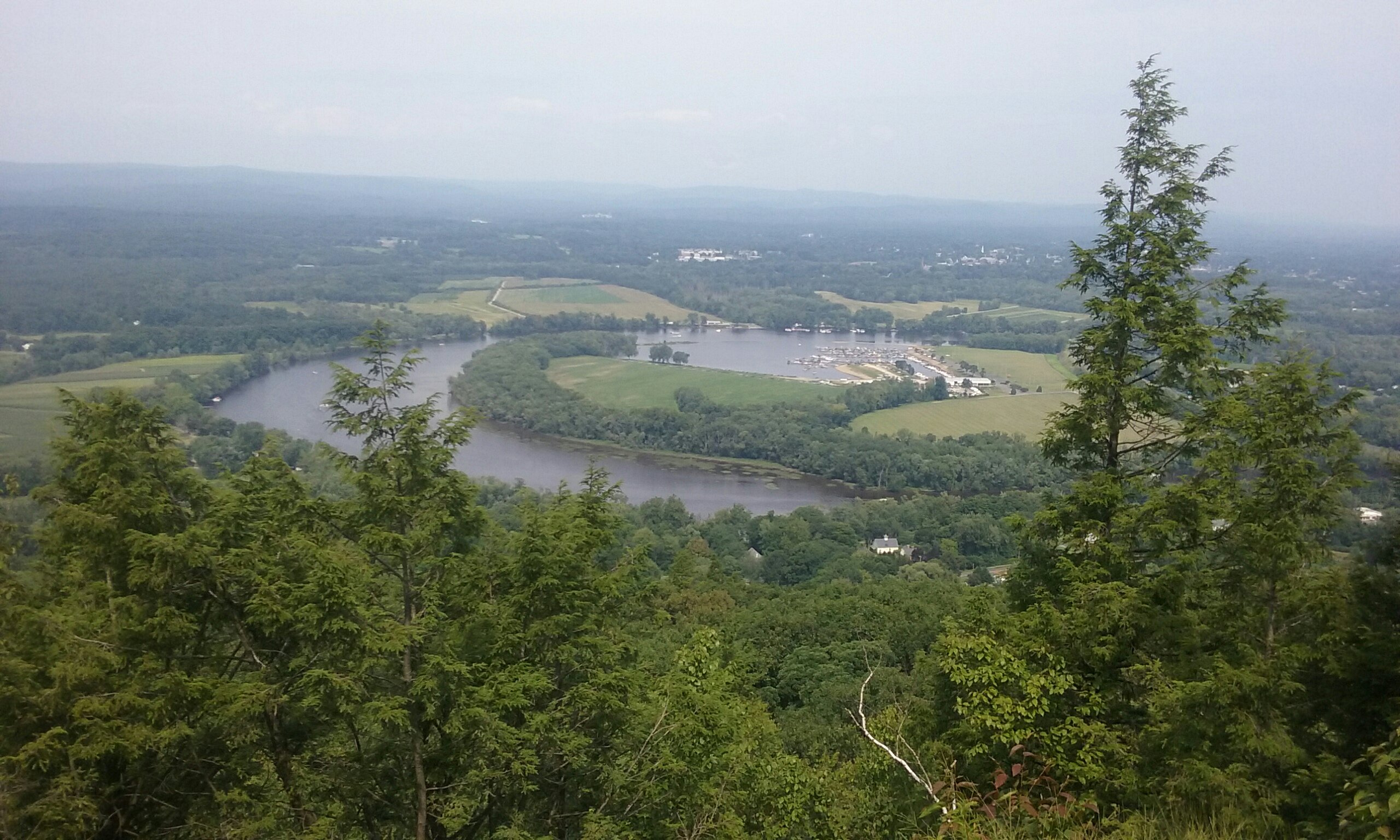 On the way up, Dianna and I talked about geology and hiking and other lighthearted topics. Dianna shared some anecdotes of her own walks on 800 miles of the Appalachian Trail. Soon after starting our climb, we met Susan, a gray haired woman who walks her favorite loop in that area frequently. I loved meeting her, feeling that it was her spirit permeating the woods, welcoming us there, enhancing each vibrant aspect of that place. Dianna usually walks on the more rugged north side of river. However, when we continued in the opposite direction from Susan, she said, “I’ll be seeing you again!”

Another walker today was a woman with her dog. “She loves attention!” she called out as we approached. We thanked her for having her dog on a leash. She shared her dismay at hikers whose unleashed dogs threaten her own stability. “I’m disabled with my new hips. I finally got the ‘Keep Dogs on a Leash’ sign put up! After a dog bit someone at another park, they finally listened to my request.” We thanked her for taking action on that to help all of us.

The other people we met on our busy walk up the mountain was a group of seven from two families from Boston. They had driven two hours to get here! I was fascinated that one of the kids was minding a grasshopper on her finger, having carried it all the way up the mountain! When we reached the top of the firetower, that grasshopper was still on her finger!

After descending from the tower, Dianna announced that she was heading back. We said our goodbyes and shot another photo. “We’ll keep in touch!” we promised, as we headed south. 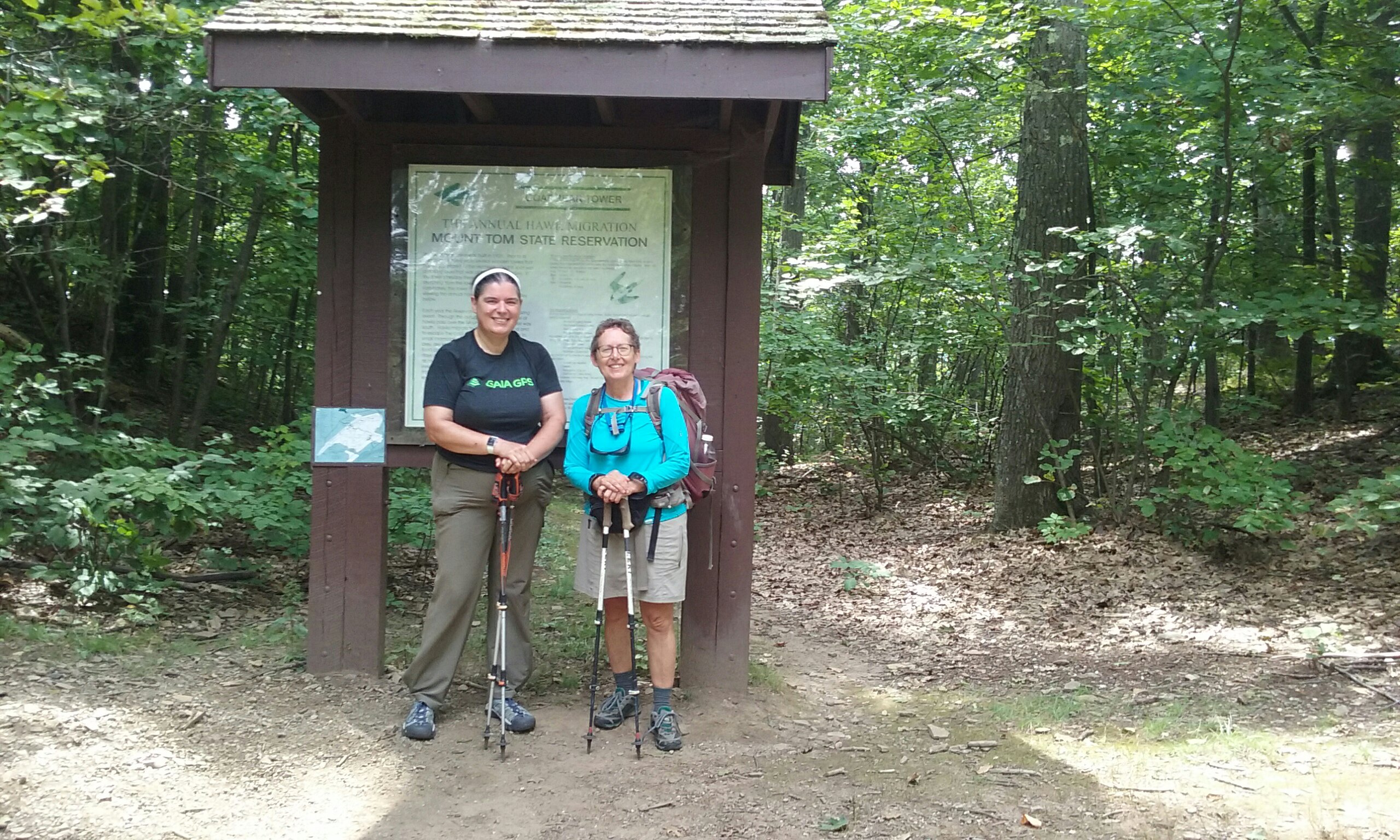 The trail followed the ridgeline of basalt rock for three more miles to its high point at Mt Tom. The basalt formed natural steps, and the glaciated boulders were smooth as concrete. 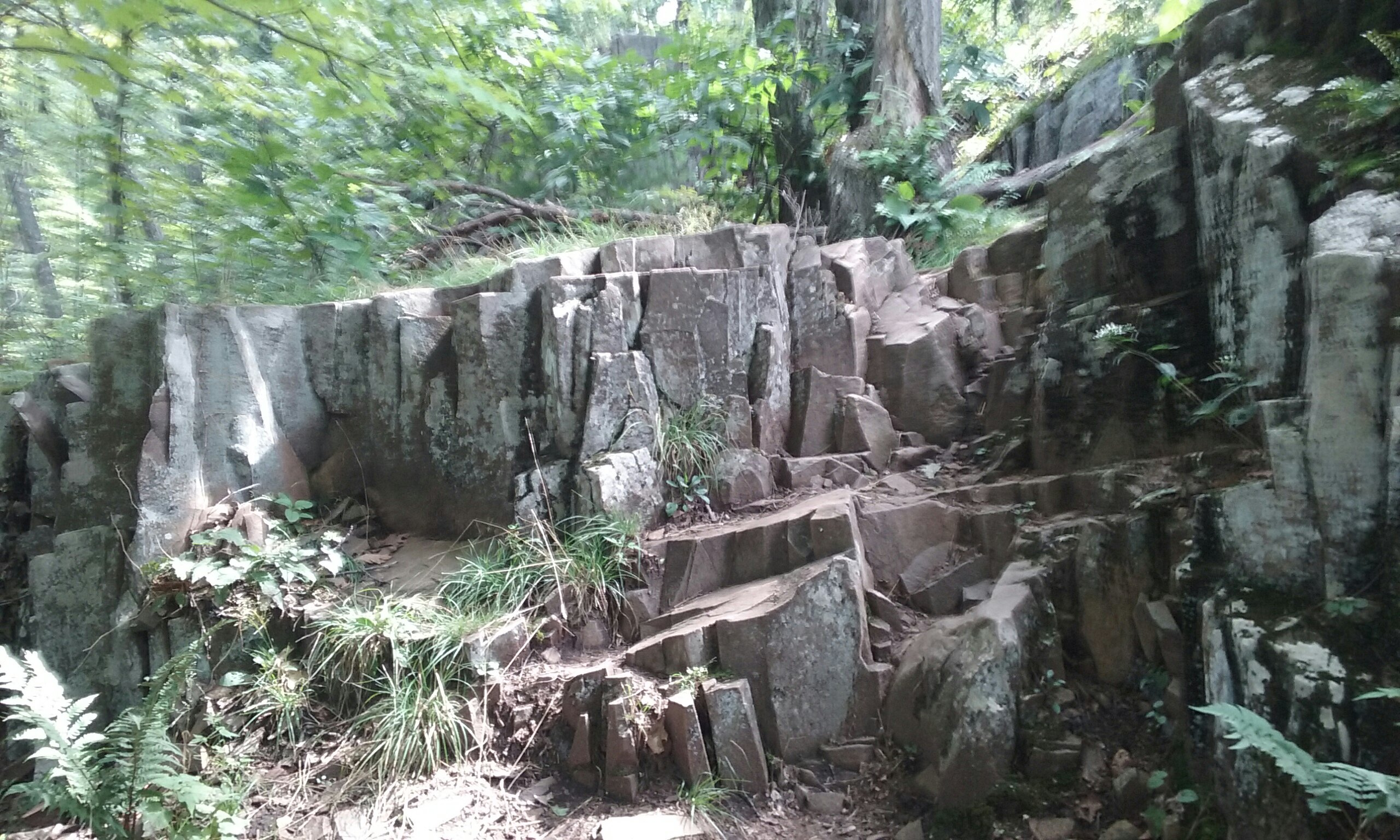 Today’s trail was a delightful contrast to the route of the past two and a half days over the Holyoke Range. For ten miles the trail went up and down every knob and valley in a very steep fashion, and not on basalt steps but on craggy, broken rock. I’ll have to learn more about what it’s geologic origin is. Whatever it is, the route gave us “quite a workout” as Dianna describes that stretch!

By 4:30 we had reached the end of the gentle and view laden Mt Tom traverse, reaching Rt 202 just past the Whiting Street Reservoir where we gathered a couple liters of water from an inlet stream. We were grateful to find that water until we read the sign at the gated entrance to the area. One of the prohibitions was “drawing or causing to be removed any water from any source.” Was our drinking water contraband?! 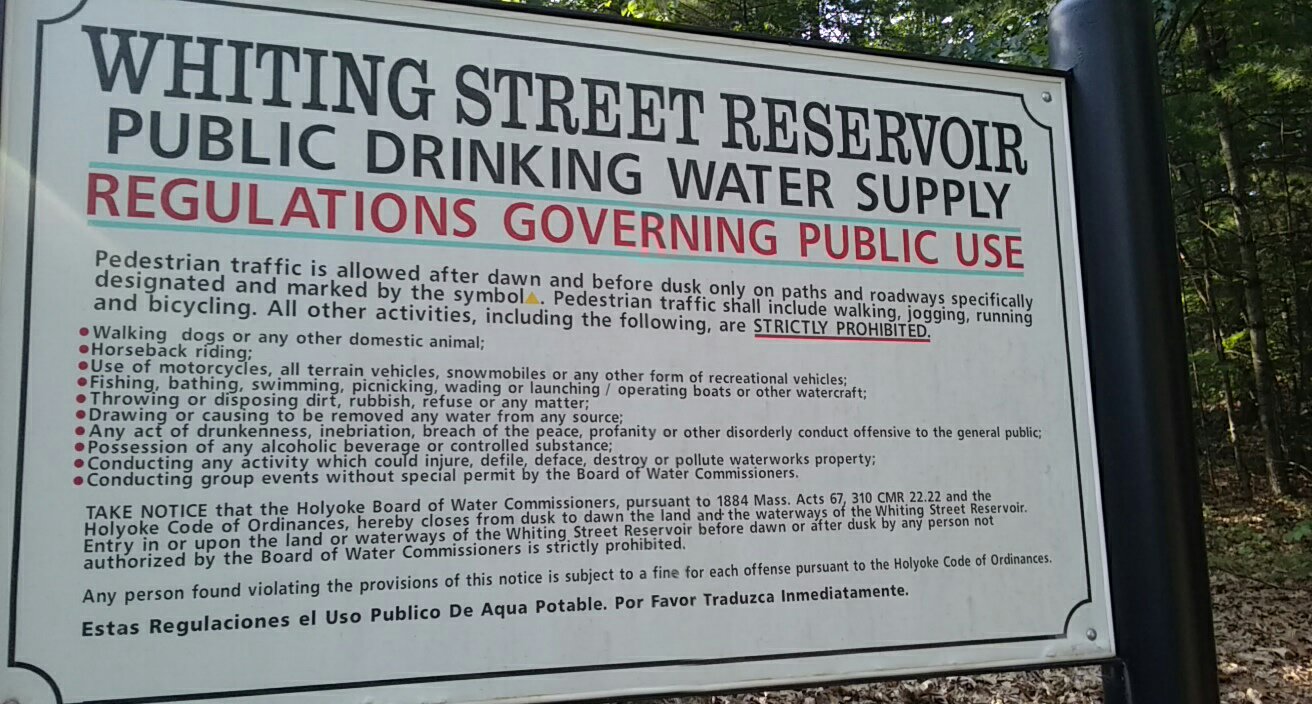 Another hour’s walk through a dry oak forest took us to our day’s destination, a “tent platform of unknown ownership.” Its placement within sight of a gravel road that ended at a gun club motivated us to keep walking up the next ridge, however, and find a spot to sleep in our tent in a secluded spot off the trail. Feeling hard to find seems more important to me now than adhering to the “no stealth camping” rule.

We supped on one of our simple dinner concoctions – pasta, chicken, rehydrated pinto beans, and habenero pepper jack cheese. The sound of crickets and other August insect singers soothes us. Starting off our second week in the New England Trail, we feel at home here. 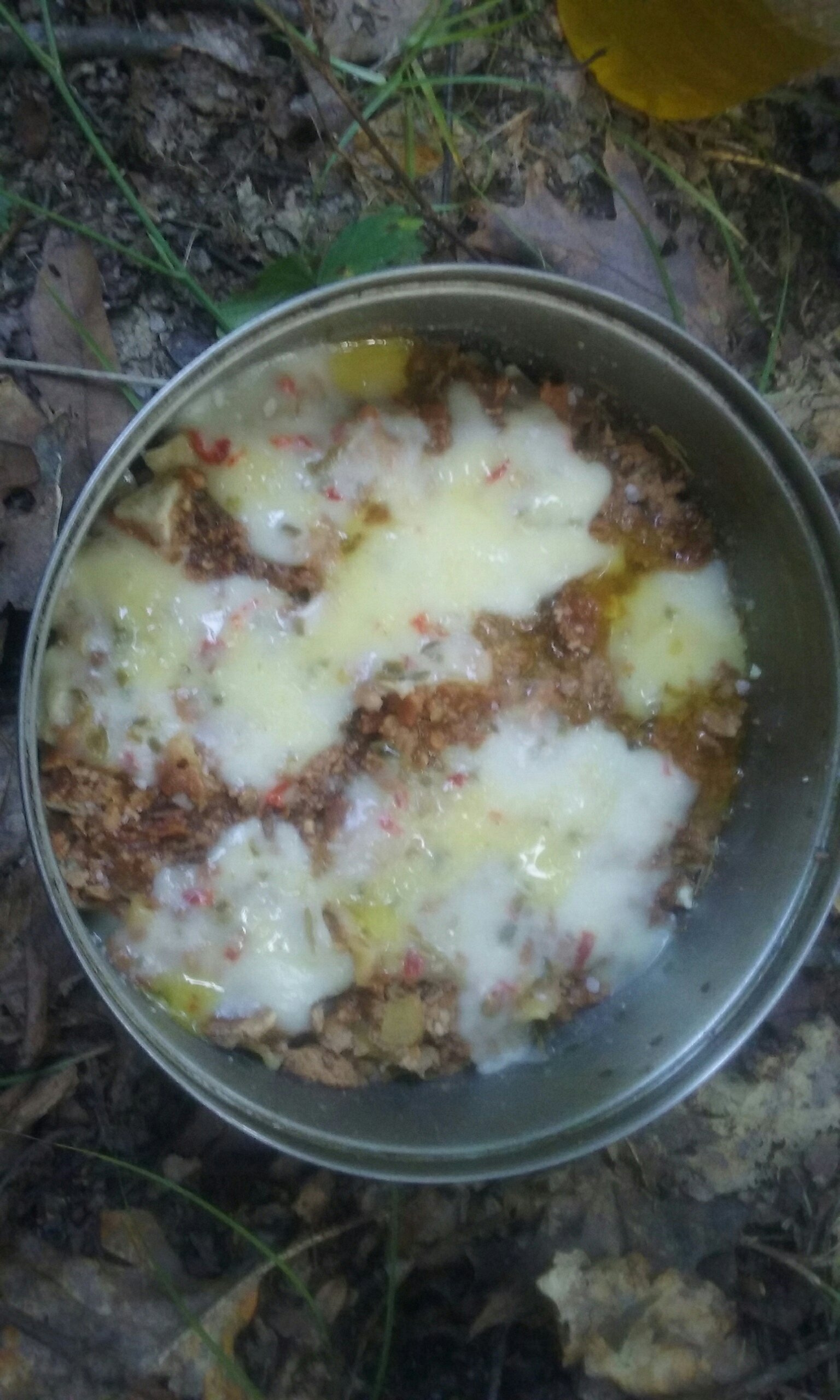