Soon after we got started, we reached the bog bridging the farmer at Calabrese Farm Store had told us about. It was, indeed, a significant project, and a welcome dry crossing of the bog! 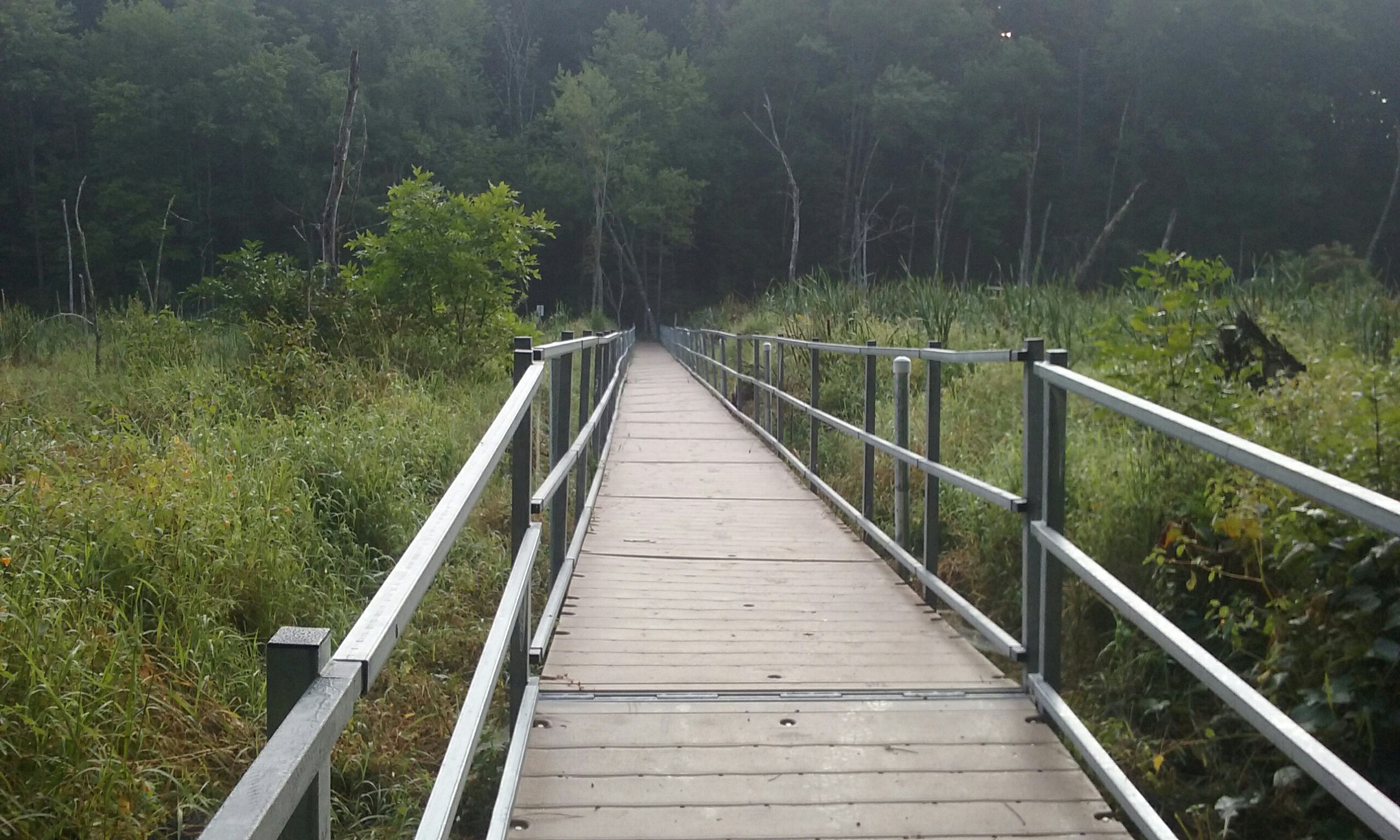 Just a short way south, we came to a small road with residences. The trail followed a wide green swath of mowed grass lined with a vegetation fence to our right. It looked to me like the landowner had created a clear easement for the trail, complete with a signed parking area at the road junction. The kiosk there displayed a map with Trail Section #1 to our north. That would mean that Connecticut was just across this road! Well, almost!

We followed the white blazes through a back yard, then stayed on the mowed pathway, confidently walking south. We passed an empty field lined with white signs declaring that this field was used to grow “industrial hemp”. We stayed on the perimeter, towards the next field, and around a pine tree, then stopped. Hmm. The path had lost its clarity and it seemed like we were headed straight for a house. “Maybe we missed it.” One of us said.

Turn around. Retrace our steps to the last blaze. Search carefully in the vegetation. Yep . There it was, a white blaze on a post just past that first yard, not past the hemp field, but to the left, through the uncut Jewelweed. Grumbling that we would have kept Section #1 well maintained, we got back on trail.

Now, we were on track to leave Massachusetts and enter our third state. In a quiet pine woods, the “Welcome to Connecticut” sign greeted us, along with a three-foot cube of concrete, a monument perhaps. We used it for a kitchen counter/seat and cooked the breakfast we had skipped to get away from mosquitos at our tentsite.

We continued south, noting one significant change in the trail’s messaging. The blazes were now blue. From this point on, we would be searching for the blue blazes of the CT trail system. I was curious how the trails would be distinguished from each other, if all the trails were blue-blazed ones. 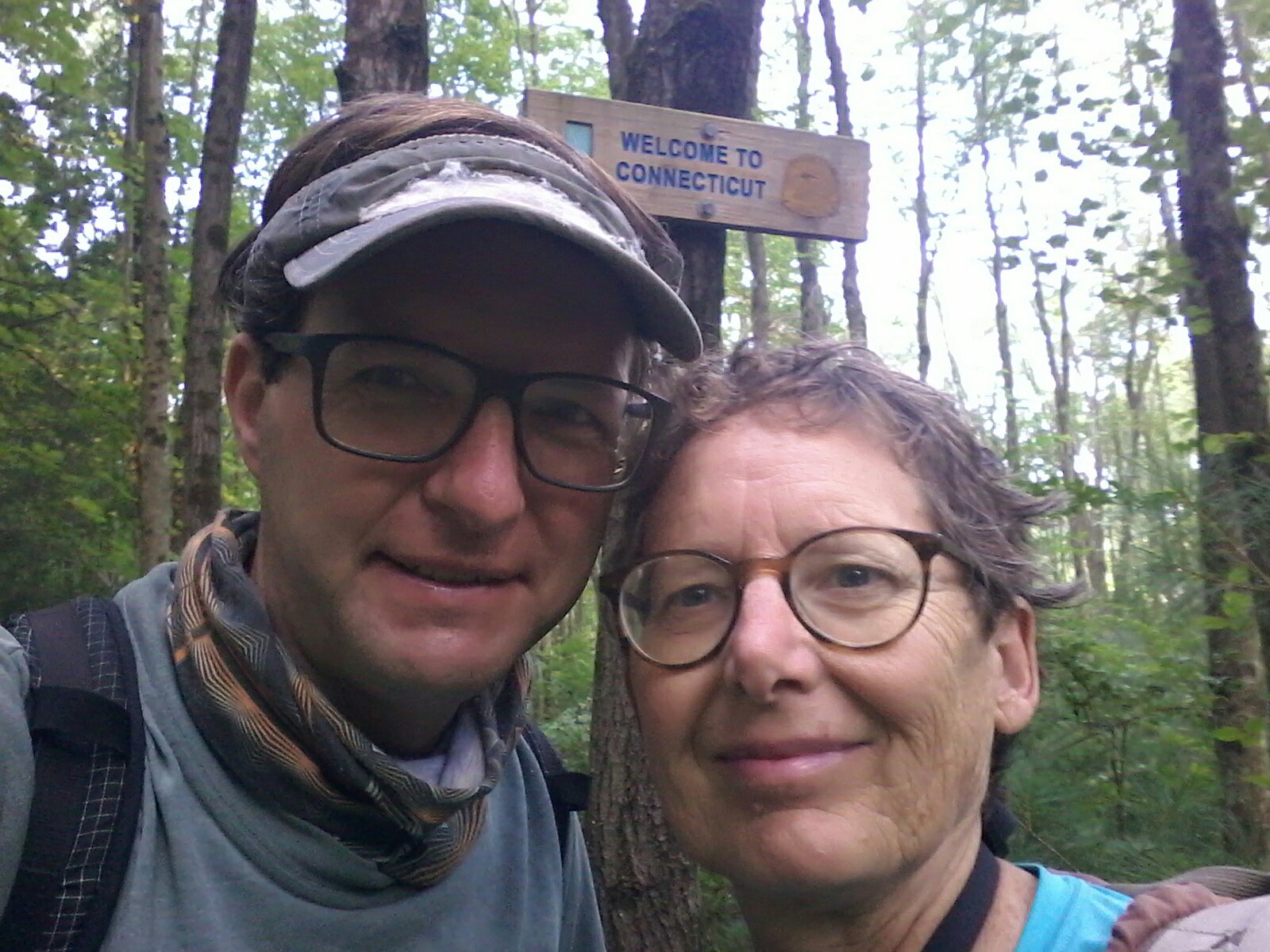 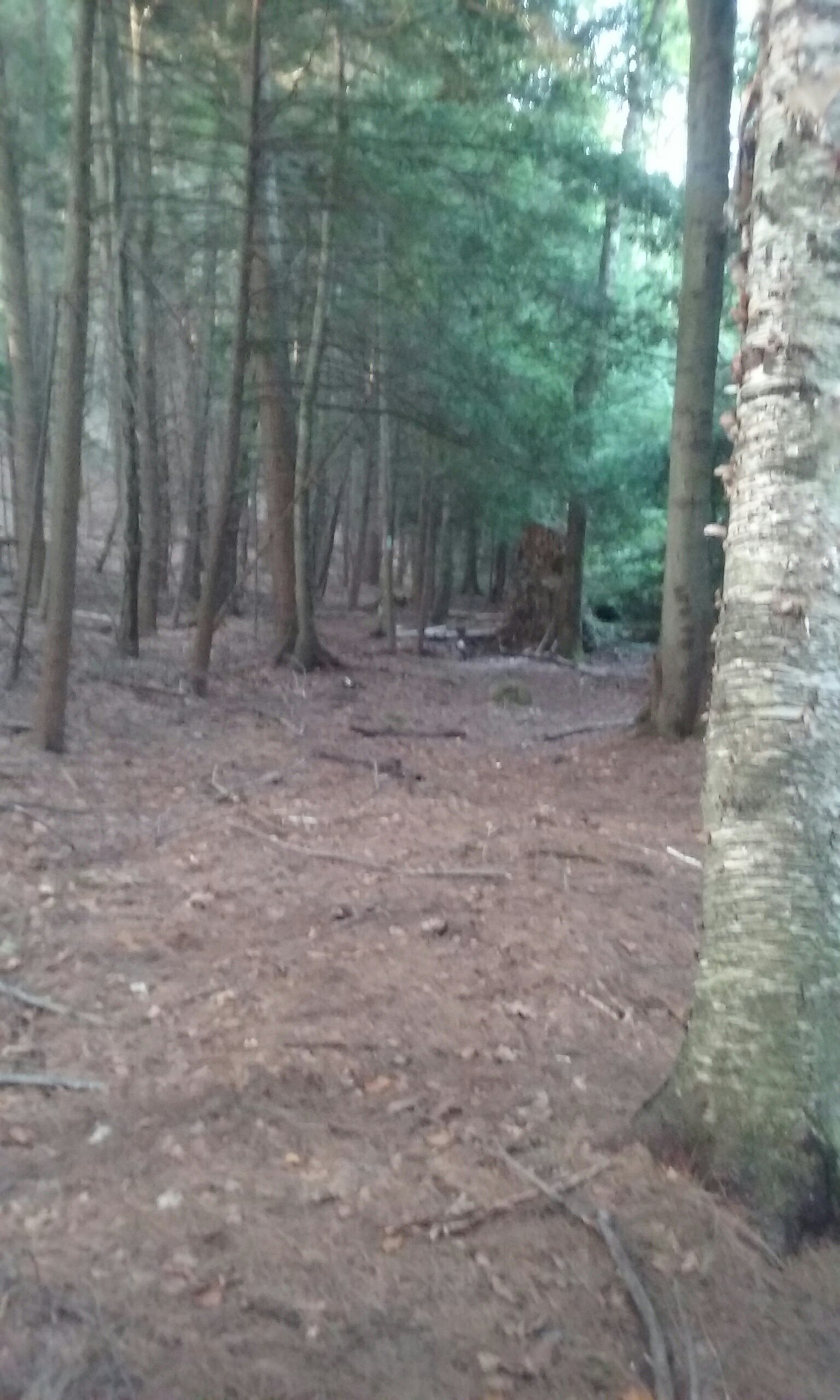 I’m writing this after our walk and can’t actually remember details about the first 8 miles of Connecticutt. The trail followed a pretty direct southward line along the ridge, called the Metacomet Ridge, actually. We got many good views of the countryside a few hundred feet below. This was a section where we entered several conservation areas owned by various land trusts, a significant feature of this trail. My pictures of this day show four signs for different land trusts, including one for “The George L. Harmon Woodlot” which was a beautiful stand of trees. I was grateful to Mr. Harmon for his role in protecting this woods. We walked through it graciously!

Just before noon, we reached one of the eight designated overnight spots on the trail, Windsor Locks Scouts Primitive Campsite at mile 106 from the NH border. We had planned to camp there that same night, but were ahead of schedule, arriving too early in the day to stop, and feeling pretty good about “sleeping out” in the trail corridor. We felt even better about our practices after seeing what an approved campsite looks like.

Here’s what we noticed:

We prefer our style of low-impact use which we believe current NET thruhikers would generally adopt. “If this is what the trail administrators regard as ‘camping’, then we hope they never allow it on the NET!”

Just before 2 p.m. we reached Rt 20, our turnnoff for our second maildrop at East Granby. This was an easy walk into town along a paved bike path all the way to the town services center, a half mile from the trail.

The Post Office, library and other govt buildings were within the same few acres. We picked up our box and sat outside on the lawn in the shade sorting it out. We had too much food now, so we packed up a couple pounds, plus partially used ointment, completed sketches, and the Massachusetts map and guidebook and sent them “home” to my Mom’s.

With that chore accomplished, we walked over to the library for internet and charging time. The librarians welcomed us and chatted about the trail. We plugged in our phones and got logged in online. A couple hours later, we filled our water bottles in the library kitchen and set out again. Libraries and post offices are welcome community services in our long-distance walks!

Right around the corner was a strip of businesses including four eateries! We chose Wok on the Wild Side and took a seat in a booth. We were the only customers there! We did notice a sporadic stream of Take Out customers, so felt better for the restaurant. We ordered two dinners and couldn’t eat all that food! I filled my lidded bowl with extras and packed it out for later. At 5 p.m. we were back on the walkway to the trail.

At the trailhead, we read the sign indicating the ownership of the land we were entering, The Galasso Company. It makes crushed stone and paving materials. We were grateful that the company had set aside an easement for the trail along the ridge above the huge quarry we walked by. It took us an hour of climbing and walking to get past the quarry. Then, we started looking for a tenting spot. We had a little trouble because the woods was fairly open and criss-crossed with bike or ATV trails. Every time we stepped off our usual 20 feet or so, we’d hit another trail! We did eventually find a spot as it was getting dark and set up for our eleventh night on the trail. It was really hot, though, so we decided to sleep in just the net, leaving the rainfly off. It was also quite buggy, so we squeezed into the net and ate our leftover Chinese food. We couldn’t keep it over night! I wasn’t even hungry, but it tasted good, even better than in the restaurant!

This was probably our most uncomfortable night what with the heat and tight fit. Without the fly to pull out the sides of the net, our bodies touched the sides, exposing our skin to the voracious mosquitos!