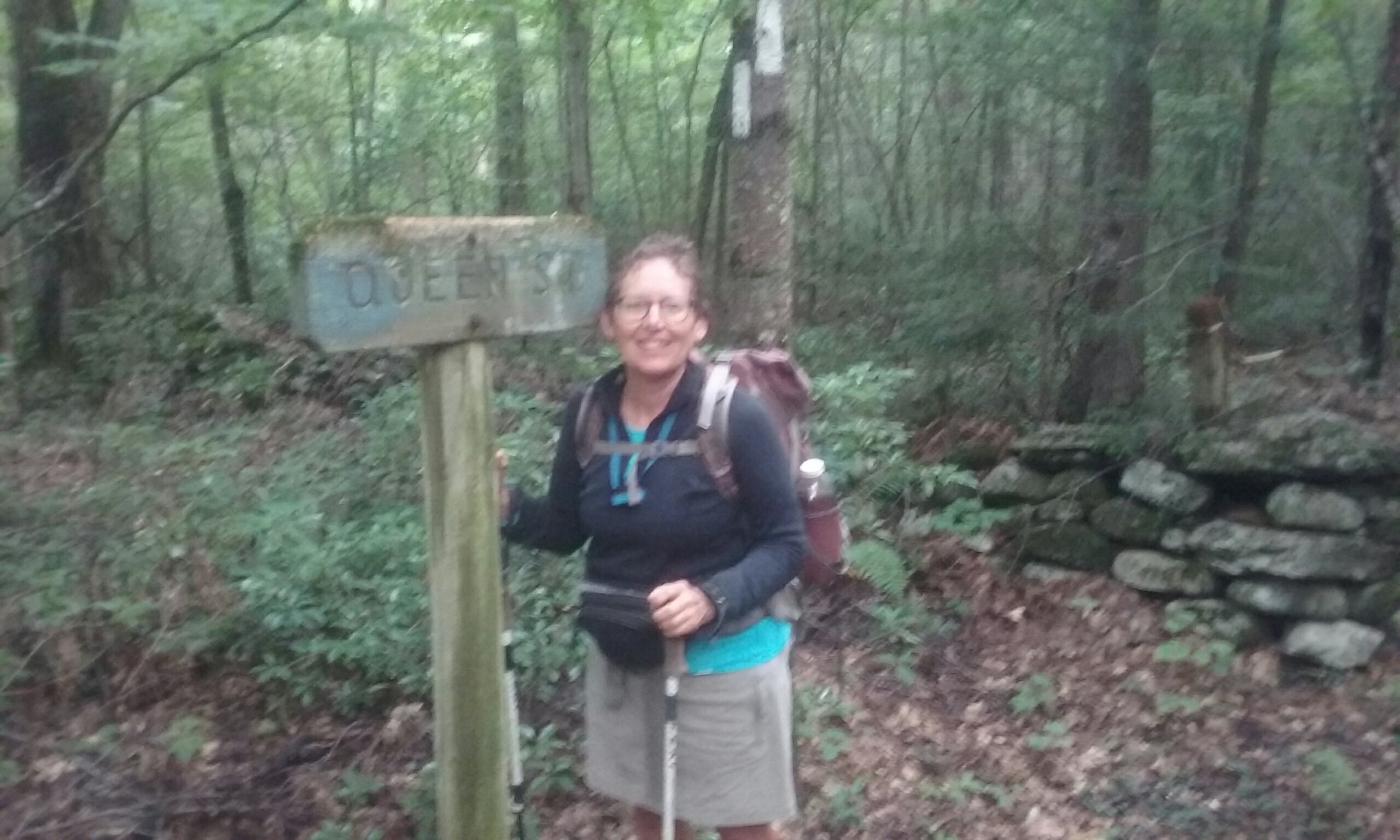 We got an early start from our hidden tentsite, soon reaching a sign that said “Queen Street”. I saw only trail, so didn’t know what Queen Street meant. We were getting near Amherst. Maybe Queen Street left town and kept going into the forest. A good question there! 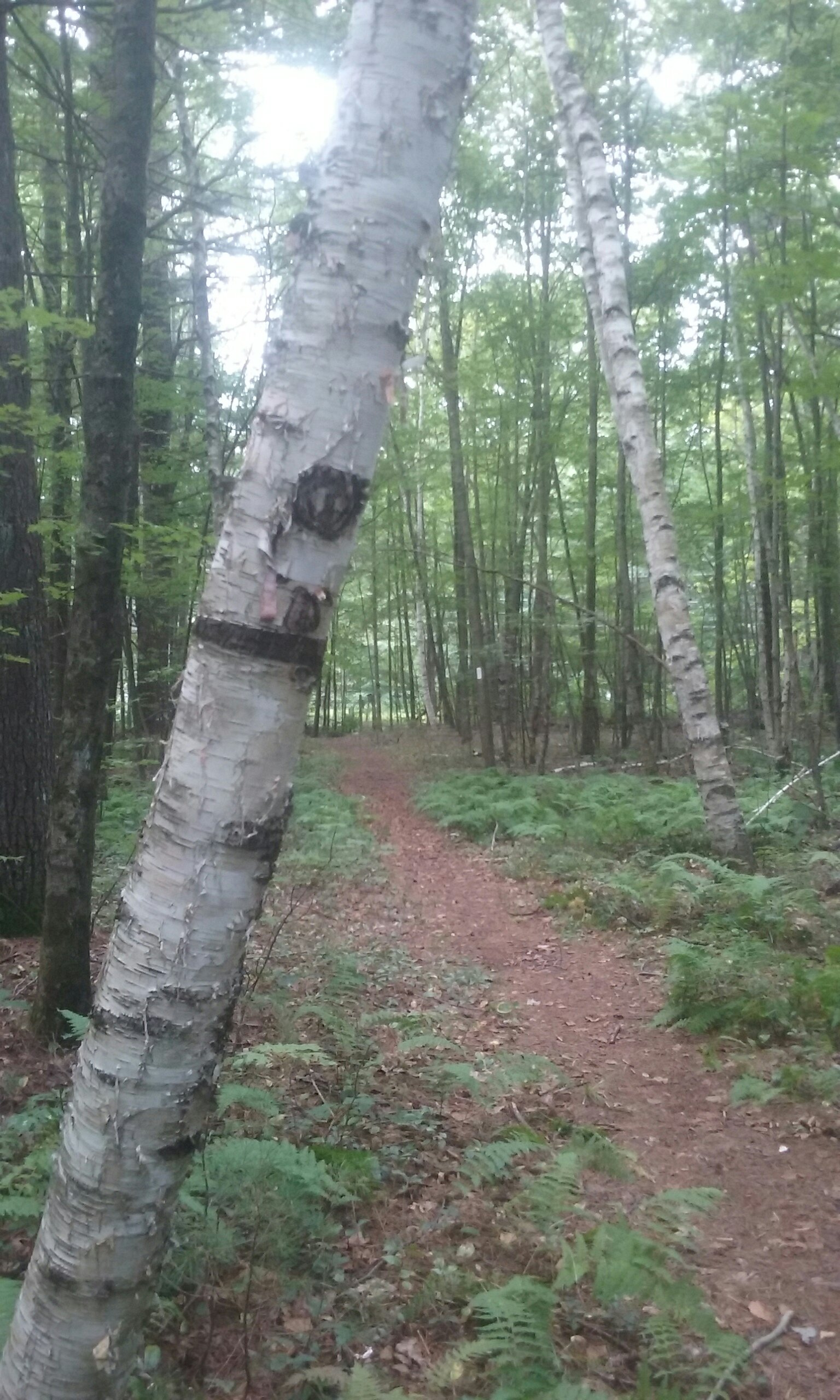 Here’s a link to an album of mushroom photos taken today. There are so many mushrooms!

Mt. Lincoln was our first summit, topped with communications towers and a firetower we couldn’t get into and no views.

Around 8 a.m. we reached a scenic spot called Scarborough Pond, complete with a picnic table, a perfect spot for our snack of rehydrated applesauce from my mom’s trees. It came out more like chunks of leather than sauce, but reminded me of being at my mom’s in Ohio watching her favorite backyard apple tree. We heard voices near the pond and soon discovered we were at Gulf Road, our next road walk! I was getting interested in noticing the many organizations who owned land along this trail! The one near the pond was Scarborough Brook Conservation Area. In the next section we saw signs for the Kestral Land Trust. Very cool name!

The rest of the morning occupied us with walking through the outskirts of Amherst. At the turn off from Bay Road back into the woods, there is literally a rope to help ascend the cliff that takes us back onto trail. Apparently, the trail corridor is too narrow to allow for a contoured ascent. I stowed my poles and grabbed onto the rope, grateful for strong arms and legs. 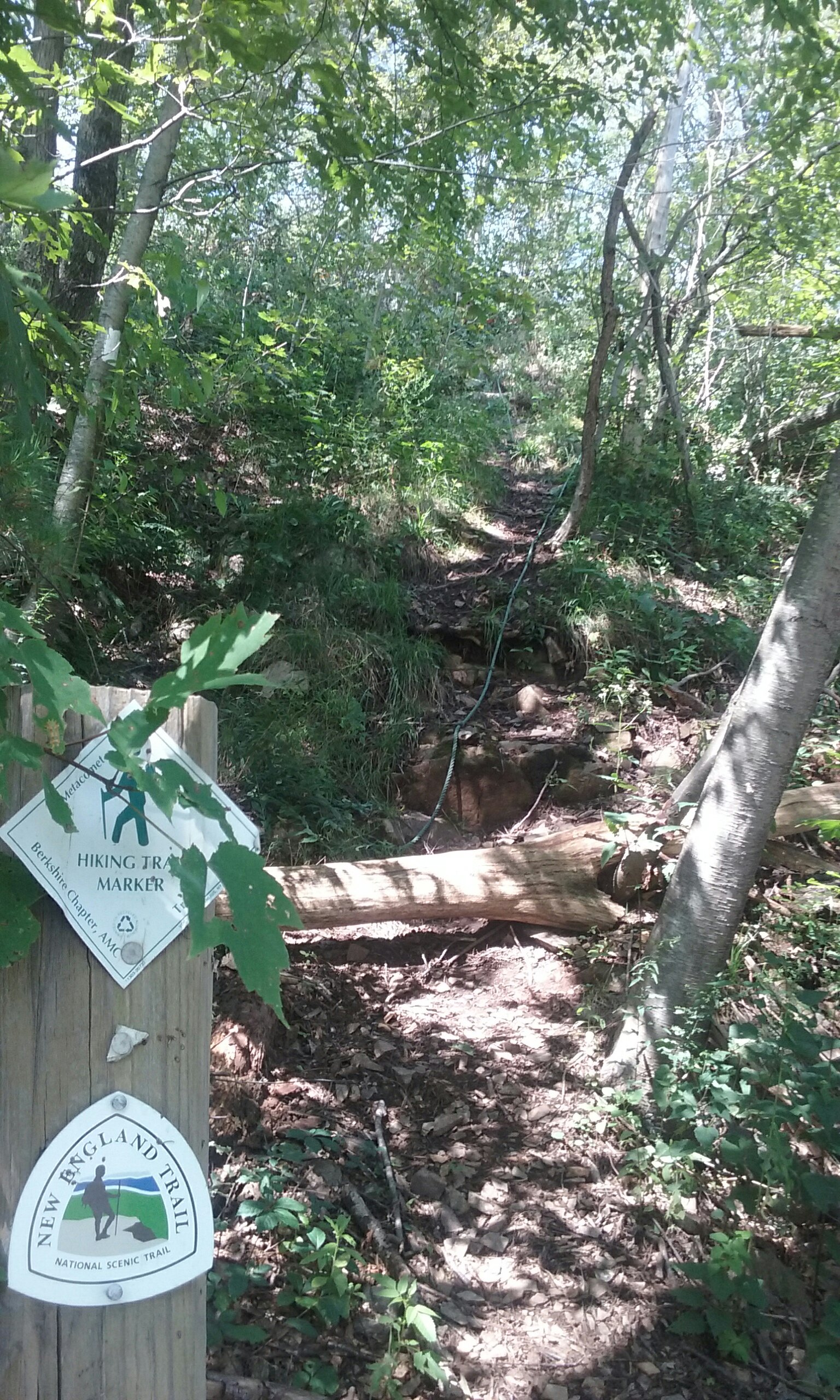 Now, we were at the northern end of the Holyoke Range. We could see from the elevation profile in the guidebook that the next 11 miles would be a sawtooth of ups and downs. The peaks weren’t all that high, barely breaking 1,000 ft, but the trail went up and down “every” rock outcrop along the ridge. Is there a rule in New England that one has to go straight up and down a climb, taking the shortest distance to get from the bottom to the top, then go directly back down? I kept asking that question and variations of it, “What were the designers of this trail thinking? For whom is this designed? Was this route planned or did it just get pounded out by athletic conquerors competing to top the most summits?” I was sincerely trying to come up with an answer that I could honor and respect, open to reframing my distaste for the steep, relentless ups and downs. I was feeling judgement and anger at the people who had made this trail, while ceaselessly practicing my Meet the Mountains Technique to maintain my stamina, prevent injury, and make the traverse easy. In my mind, I sincerely sought to choose an affirmative view for appreciating this style of trail. I practiced out loud with John. “Ahh. I love the challenge of this trail! It’s so great to get to another climb! Wow! So glad I didn’t miss this outcrop!” John heard my trial affirmations as complaints. So, I kept my mouth shut and kept walking, working out my frustration in silence.

A little after 1 p.m. we got our first view of Mt Norwottock, still 2 miles away, and the highpoint of today’s walk. 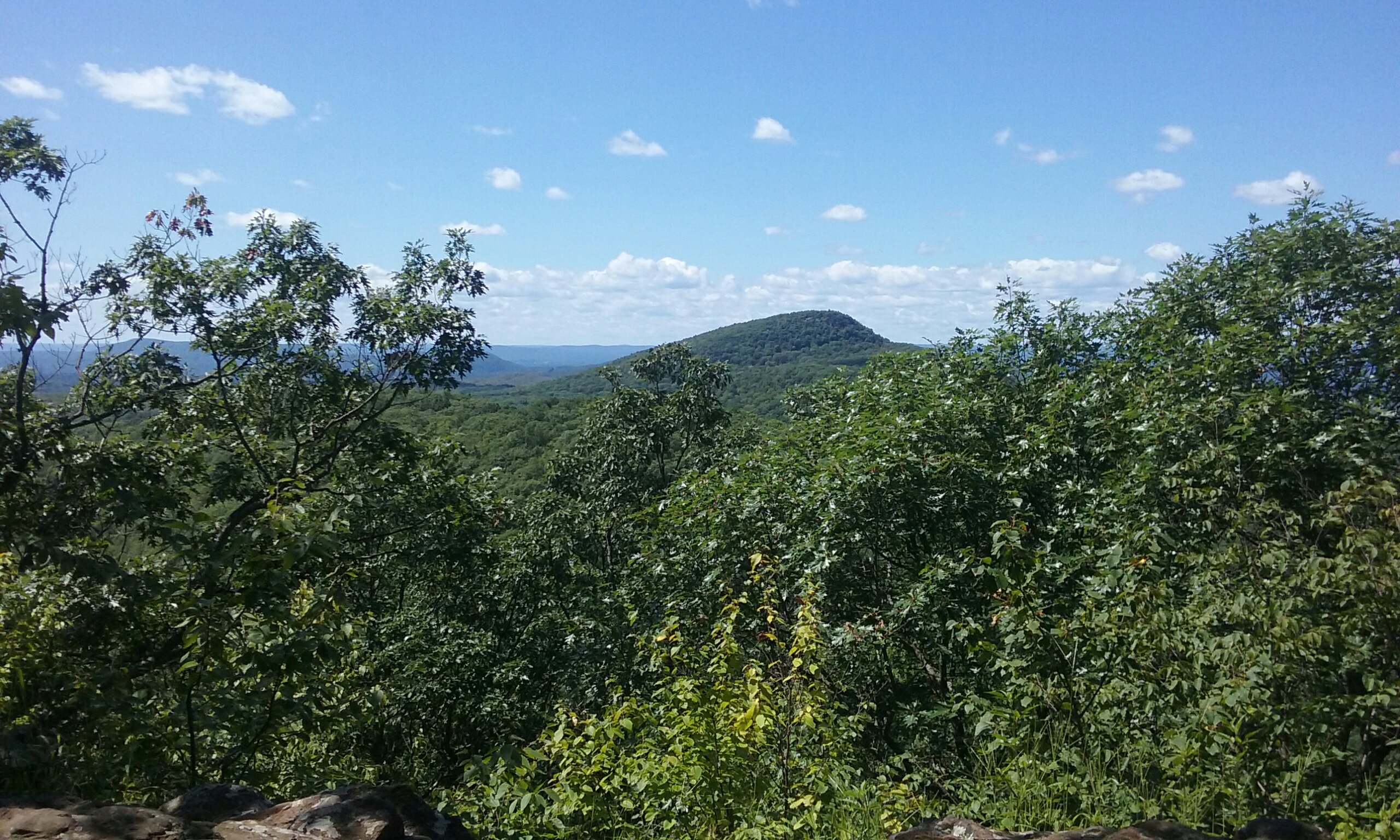 I was beginning to accept the jagged terrain and silently maneuvered it, focusing on taking each step safely, bending my knees, using my trekking poles consistently, and stepping accurately on each step. The ascent up Norwottock included a feature called “The Squeeze”, a slot through jagged boulders that young boys would love and old ladies like me endured. I faked a smile when John insisted on taking my picture surmounting The Squeeze.

Norwottock was indeed a worthwhile achievement where we looked over the widespread landscape to the north. 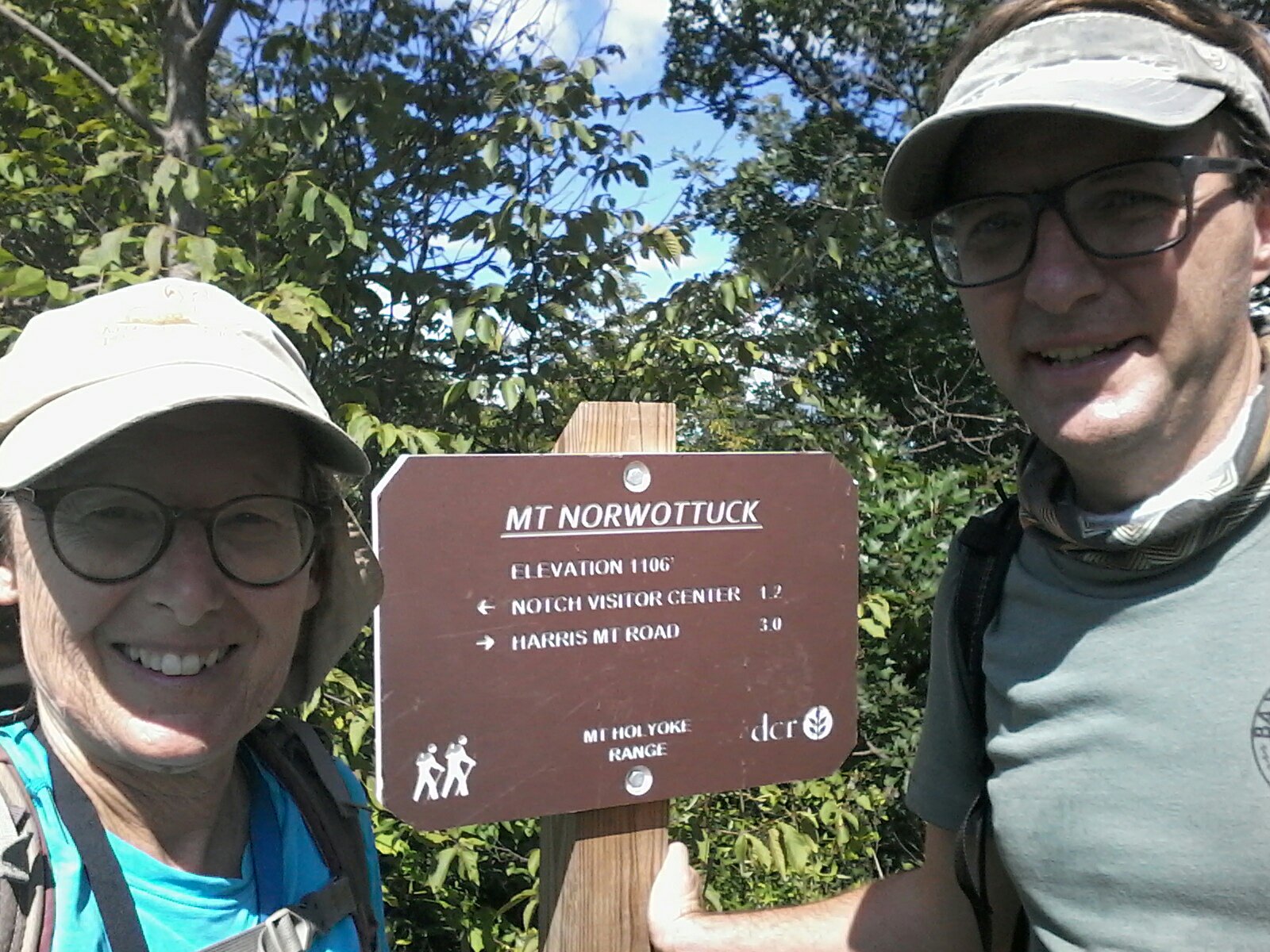 Now, we watched our time. Our next landmark was the Notch Visitor Center, described in the guidebook as having restrooms, water, and outlets for charging. It closes at 5 p.m. We diligently covered the 1.2 mile steep descent, meeting a handful of dayhikers walking in this popluar area. We reached the Visitor Center a little after 4. We found the restrooms and water fountain easily. The outside receptacle didn’t work, but the outlets in the lobby near the bathrooms worked. None of these would be available to hikers outside of open hours.

I studied the 3-D map of the Holyoke Range and discovered that we had just traversed “The Seven Sisters”. Oh yes! We definitely went up and down all seven of them!

Our next adventure of the day was to continue south, across busy MA 116 and up out of the Notch to Bare Mtn. Resuming our steady, athletic rock climbing, we joined several other hikers on the half-mile, 400-ft climb to the precipitous view of the notch and the northern Holyoke Range. In plain view was a quarry, stair-stepped with carved away earth, the negative space of the mountain on which we perched.

On our way up, we were passed twice by a man apparently using Bare Mountain for his exercise therapy. He wasn’t smiling, but he was stepping quickly both up and then down that mountain. Now, here was someone relating with the design of this trail in a significantly transformative way. I was content to be ascending Bare Mountain once.

Our sensitivity about camping out along the trail was tested when we met a couple who asked, “Are you camping here?” “No.” I answered, meaning that I was not camping right there on Bare Mountain! “Where are you camping, then?” We walked away, saying “further south.” Although we were getting more comfortable with our way of sleeping off the trail without leaving a trace, we support the rule of “No Camping” realizing that a general view of camping is to clear a large area of vegetation, build a fire ring with a fire and leave it all behind as an established campsite. We weren’t doing that.

We went up and down a couple of jags until we reached the sign for Hitchcock Mtn. Not wanting to go much further as dusk settled and this rugged day’s mileage had already topped 14, we left the trail toward the northfacing ridge and plopped down on a tiny flat spot about 30 ft off the trail, as far as we could get before going down the slope. As always, we hung our food bag, cooked on our stove, and quietly blended into the forest as darkness fell and an owl called. 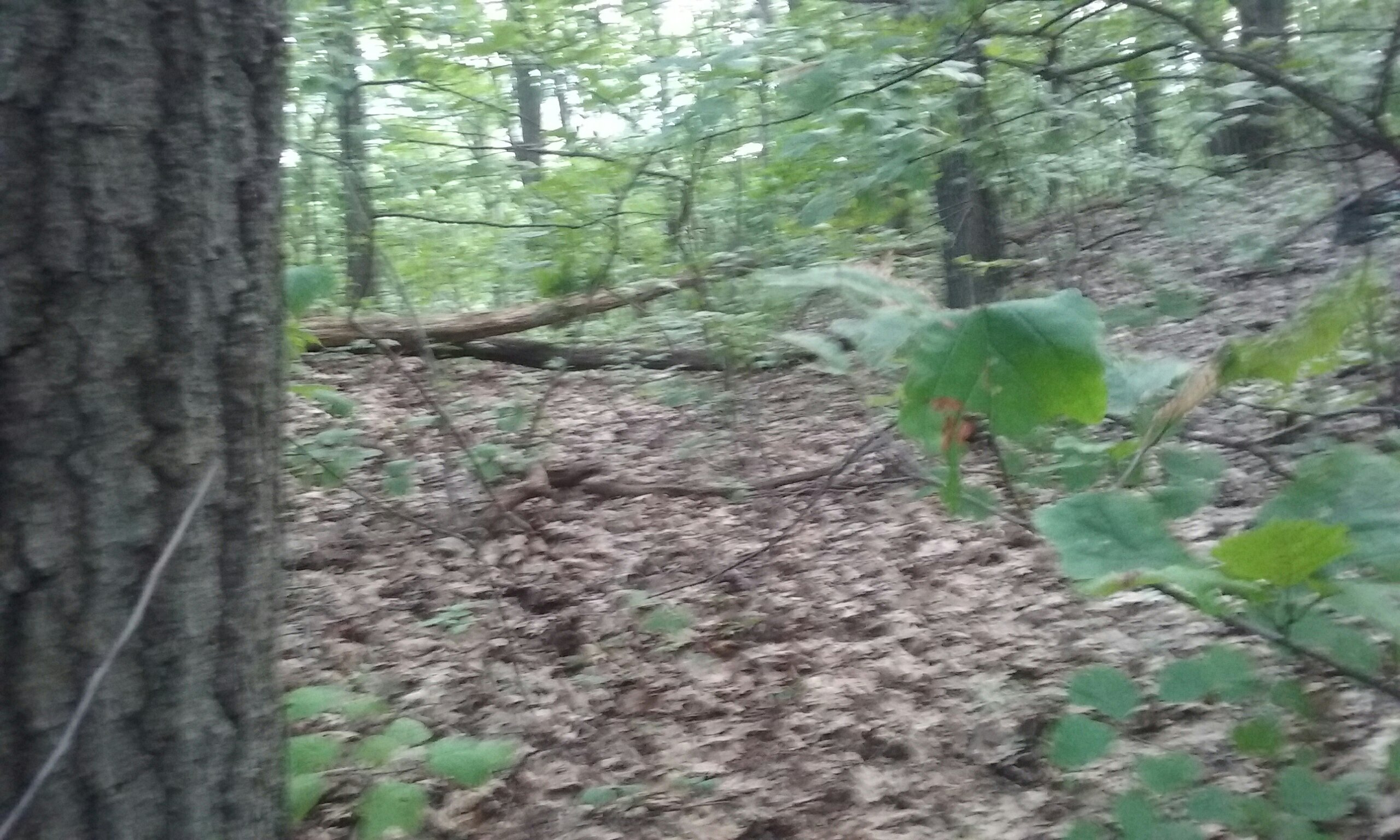