The nearby chuch bell chimed the hour all through the night. I heard it each hour except 2, so I must have slept soundly at least a couple of hours. At 6 bells we started to get up. The morning woods was quiet, peaceful, and tingling with life! Even though we weren’t supposed to be there, I felt that we were honoring the forest by being there reverently, protectively.

We descended gently down from Little Grace Mountain past Bass Swamp and Bass Road. A quaint, handpainted sign laid out our day. We were aiming for Farley and beyond, 15 miles south. 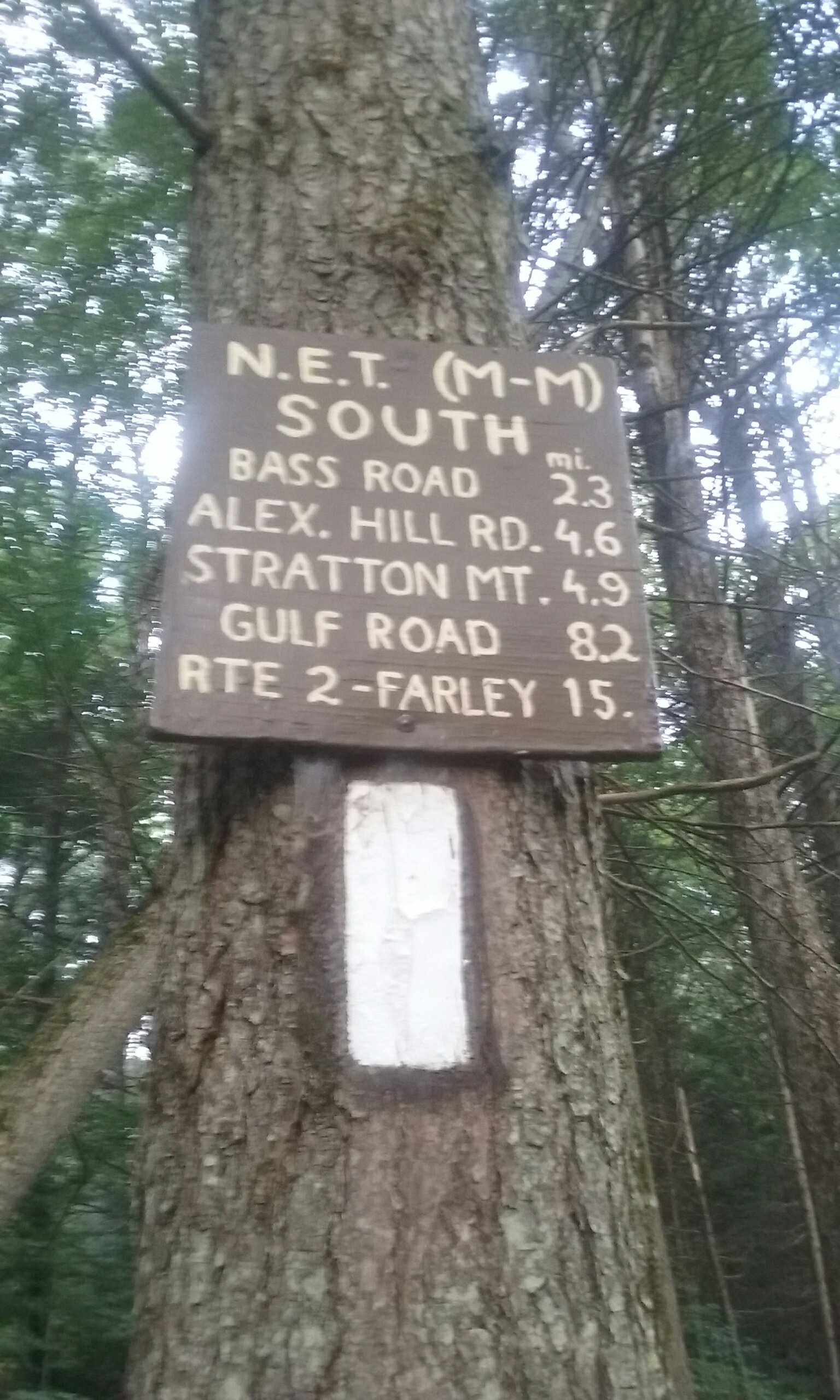 What a full day of landmarks, terrain changes, and a good surprise!

We reached Stratton Mountain, decorated with a stark monolith and an altar-like stack of boulders. I imagined Aslan, the great lion from the Chronicles of Narnia, lying there in sacrifice. Nearby, the 7-ft high solid rock, standing symbolically on its end, reminded us that humans like to erect monuments. These would have taken some big machines to stand up and stack! 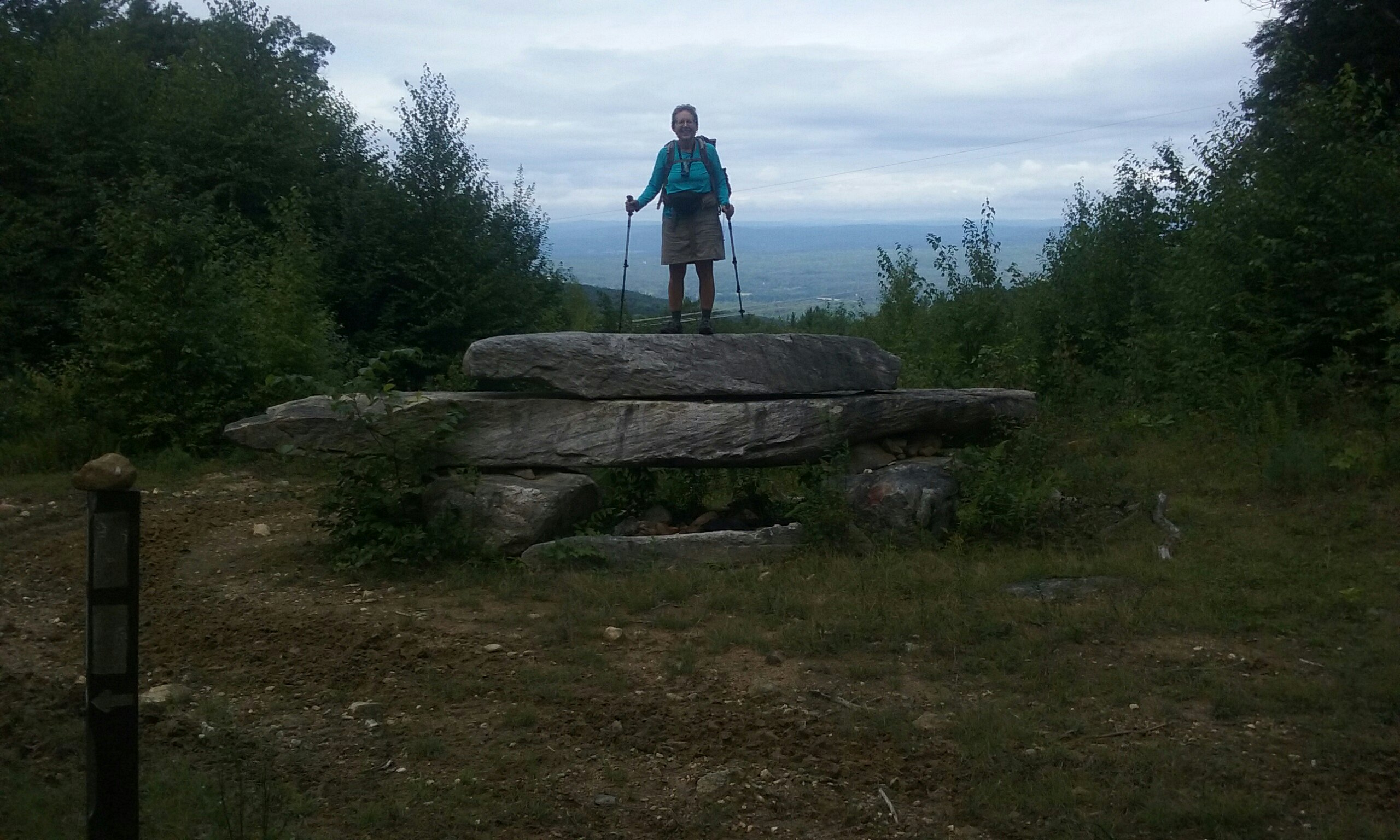 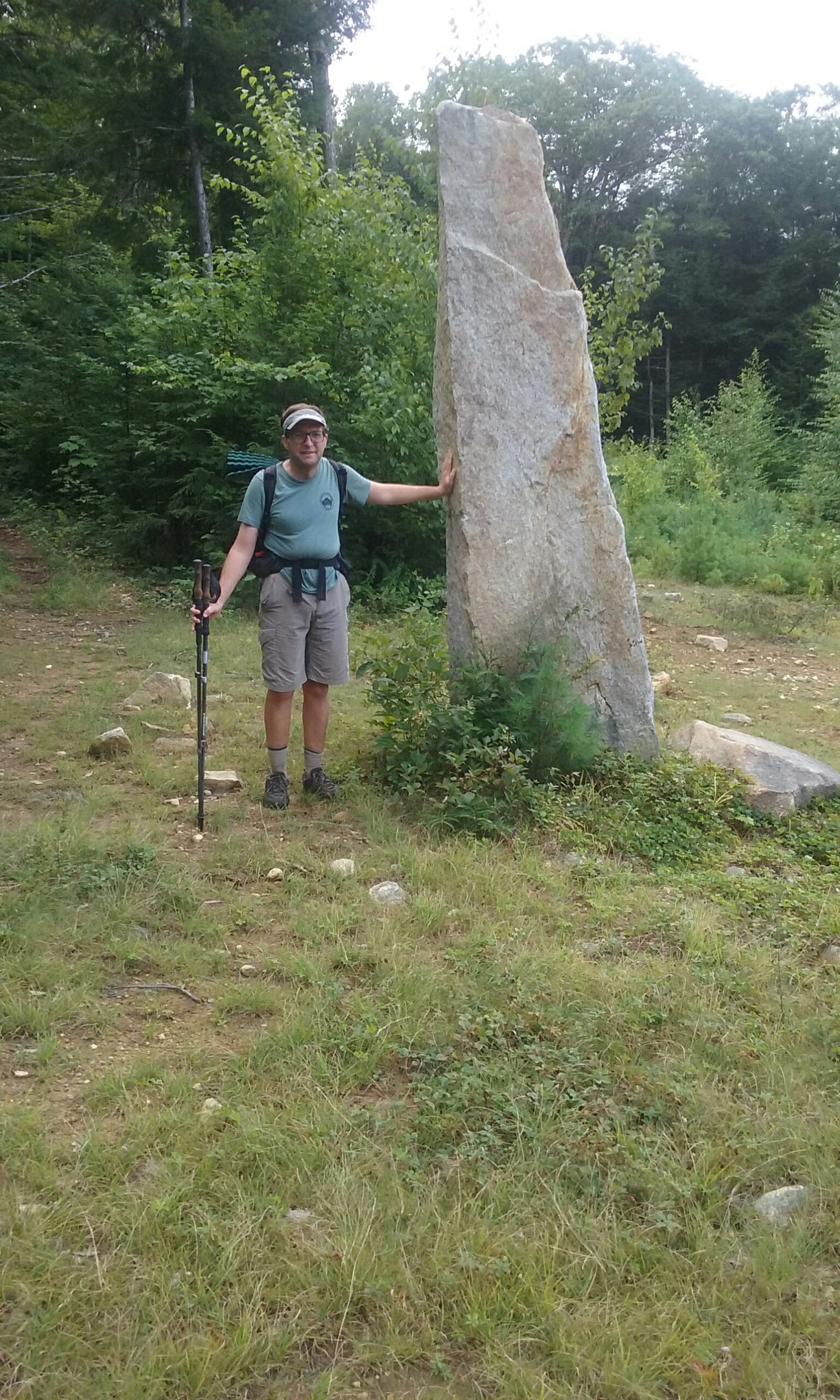 Just a few minutes away, winding through the forest, we arrived at another landmark, the Richardson-Zlogar Cabin. Our original itinerary had put us here tonight, but now we were ahead of schedule. It was just 10 a.m.! We did enjoy a nice break here, gazing north with a perfect view of both Mount Grace and Mount Monadnock, 38 trail miles back. That was a nice feeling of accomplishment! 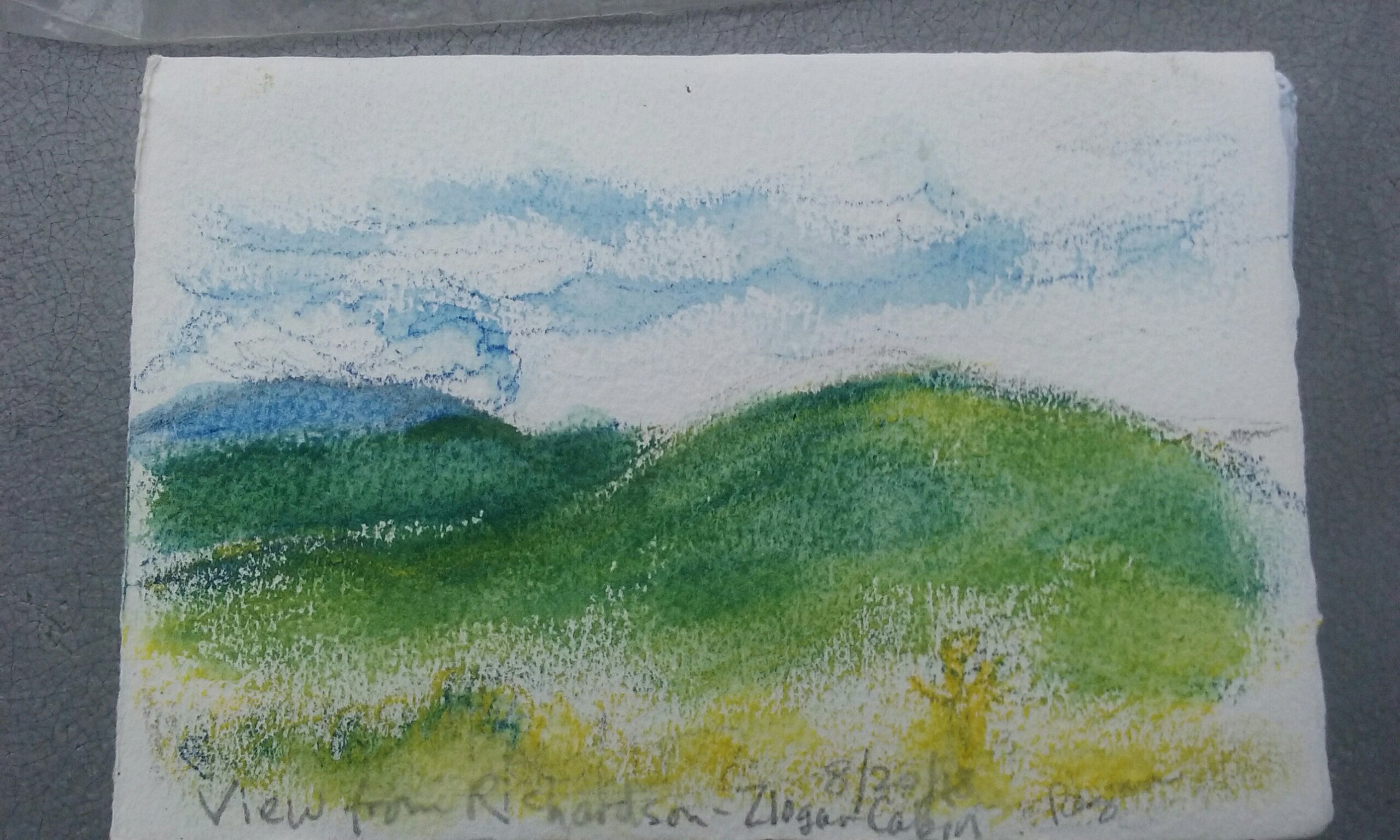 The cabin looked cozy and dry. It would be a good place to stay if we could be certain of our arrival date and reserve it in advance. 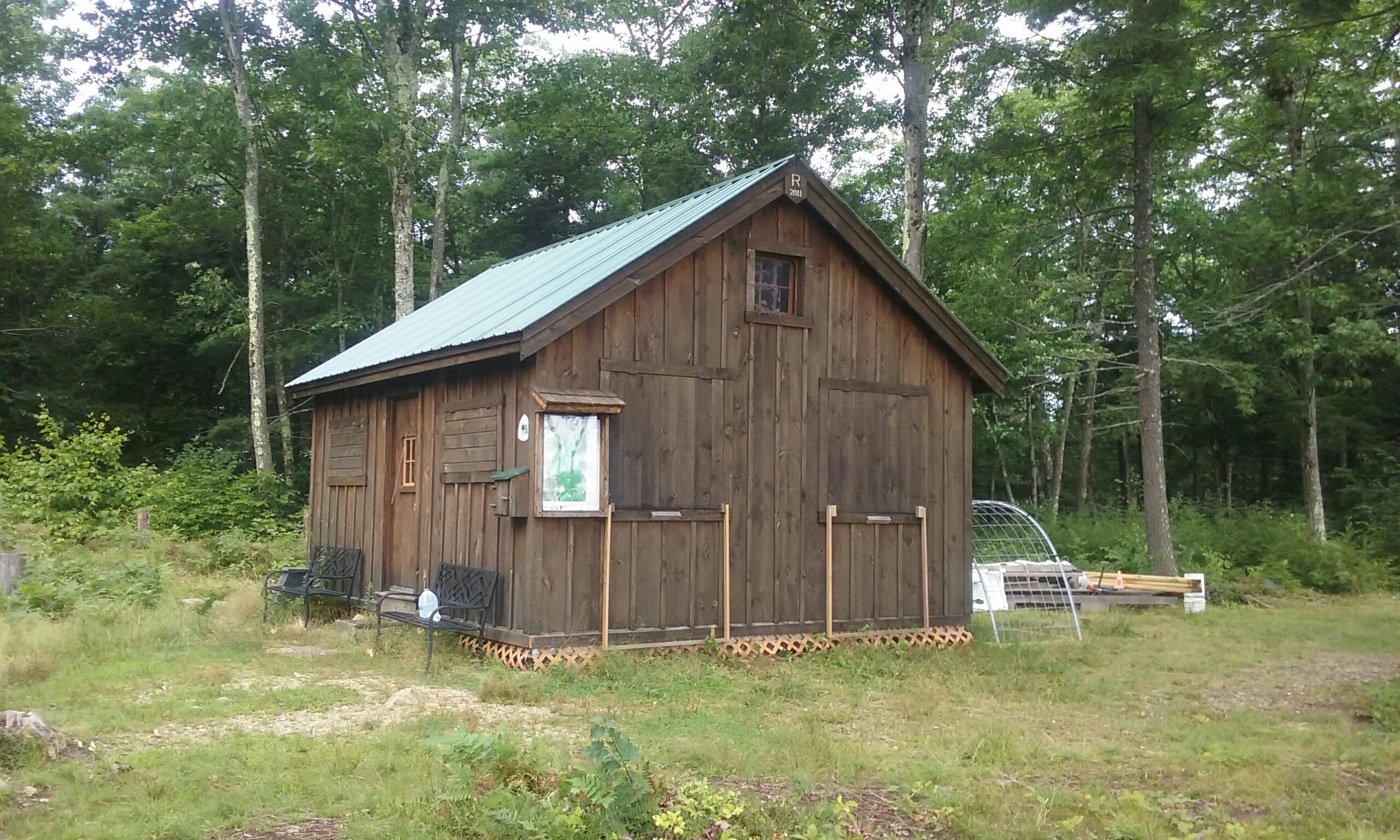 Two more miles of gentle descent through Northfield State Forest took us to our first significant road walk, Gulf Road. We crossed the road and saw signs for a preserve area and wondered why the trail wouldn’t go through it. The sign and kiosk posters alerted us that the trail was closed 1.4 mile ahead after Crag Mt, so we would have to take the road walk.

Addendum, Next day, I received this email from Jim, whom we had met on Mt Grace.

“At Gulf Road crossing, you’ll see a sign that says “trail deads ends” in 1.1 miles. It does not. I hiked that section on Friday. You can proceed following the white blazes, and at that 1.1 mile point there is no trail closed sign or anything, but the blazes do stop (you can see them painted over with brown). The trail is easy to follow, and in another mile or so the blazes are actually blue for a bit. Keep following the well-worn path, with a couple of nice views on Crag hill, and then you’ll come out on a dirt road, which is a driveway, and turn left, and in a couple hundred yards you’ll hit Mountain Road, and rejoin the official route. Just before the road intersection, you’ll see a sign on your right side (west) that indicates it’s private land and stay on trail, but nothing about a closure.
I suspect what happened here is a landowner closed it, and then decided to reopen it or maybe it’s a new landowner, but in any event, it saves almost three miles of road walking.“

The road wasn’t bad for walking, with a shoulder and moderate traffic. We imagined a few of the houses, now boarded up right next to the road, being converted into hiker shelters. To our surprise, part way down the road, we saw signs for “Farm Store.” It was right there on the road, too! No one seemed to be there, however, and it looked like the front porch was still under construction. Was it open?

Yes. It was open for self-serve! What a nice surprise! Food on the trail! We found eclectic delectables too – kimchi, kombucha, fresh corn, cucumber, and I threw in a bag of “profits go to autistic kids” potato chips and used the iPad bolted to the counter to pay. We sat on a bench made from a board suspended between cinder blocks and snacked on kimchi and kombucha, eating it down enough that the rest could fit in our lidded bowl to pack out.

My receipt from Northwoods Store appeared in my email. 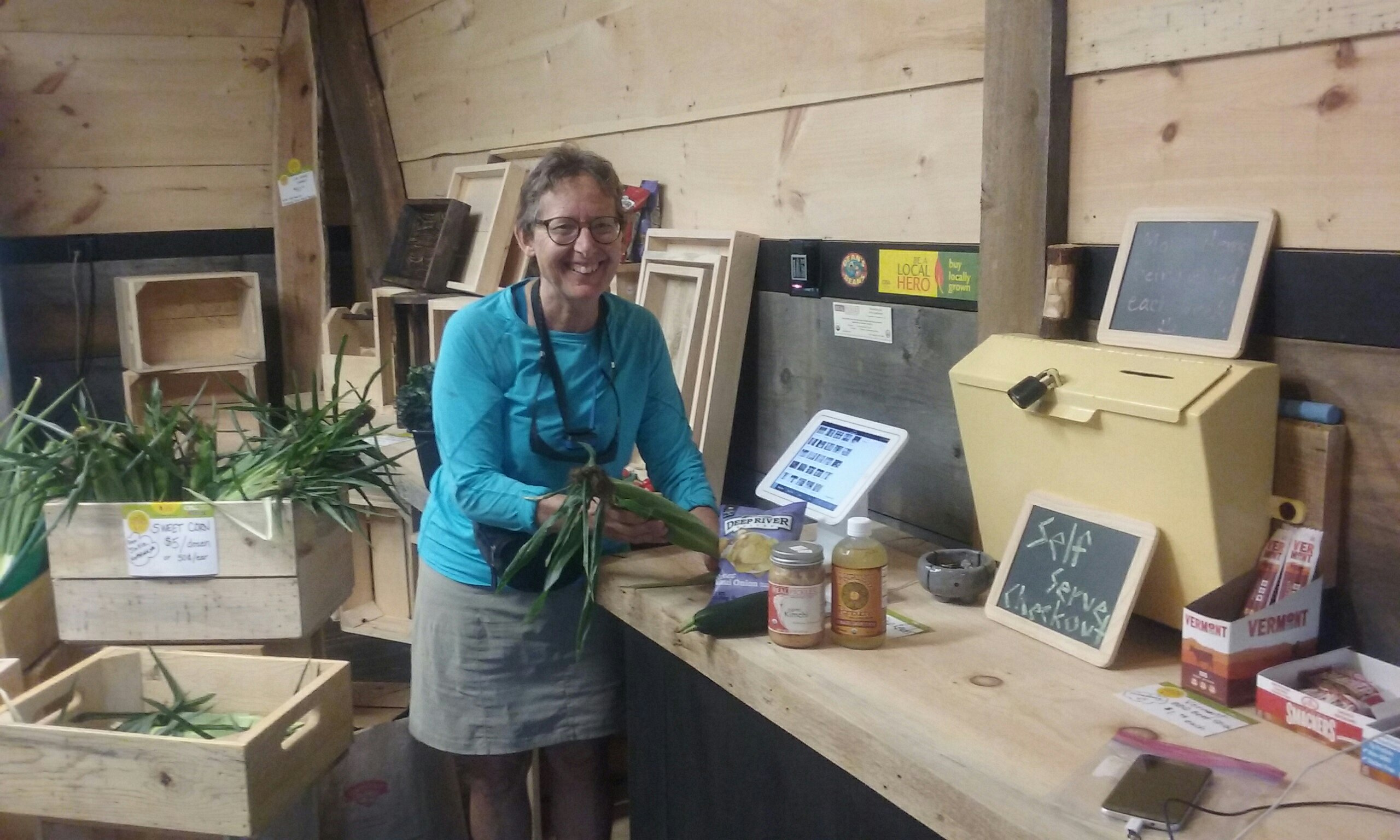 We walked the last half-mile of Gulf Road, then climbed up Mountain Road, locating the double blazes indicating the turn off into woods next to someone’s house.

The next stretch of woods was short and beautiful, emptying out onto a gravel road. Our next treasure hunt was the turn off for Hermit Mountain. This section has the mystique of a side trail to a “Hermit’s Cave”. We didn’t go there, but stayed on the white-blazed trail, winding up to a scenic overlook in Erving State Forest, with a sweeping view of Millers River below. 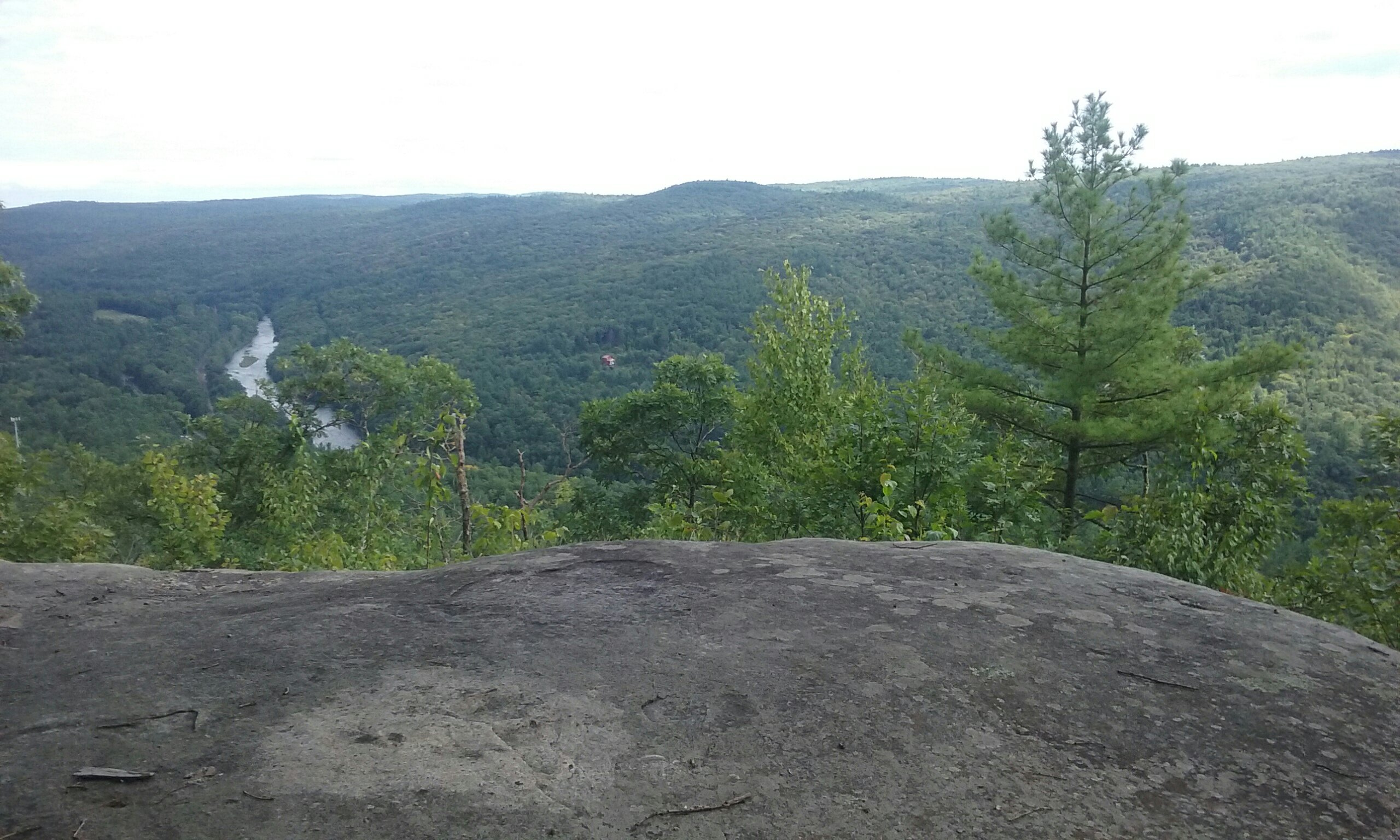 It was tempting to sleep out up there, but while we walked south looking for a spot we kept going all the way down to Rattlesnake Mtn, which was too close to the road and in a popular area for climbers. Soon, we were out on the road again in a residential neighborhood where people’s front yards were roped off for parking.

We carefully crossed busy Rt 2 and found the blazes on Bridge Street to cross the Millers River. No stopping here! Now we were committed to the 2-mile roadwalk on Farley Road to Wendell State Forest. This was an ok roadwalk, past homes and a woman calling from the mailbox down to the house below. Apparently, she was looking for a walking companion. She passed us where we had stopped along the road, finding a fresh-looking spring to fill our water bottles. I wonder if she enjoyed taking her evening walks on a national scenic trail!

It was a little tricky finding the blazes at the end of Farley Road, but we discovered them taking us a half mile west on Mormon Hollow Road before turning off into the woods. Soon, we discovered why. The trail designers wanted us to tour the ruins of the mill town along Mormon Hollow Brook! Fascinating!

Past the ruins, we came to a footbridge, cordoned off with “closed” signs. We studied the bridge and decided to cross it, trusting its sturdy-looking I-beams instead of fording the stream below. We made it, no problem. Later, we realized that maybe it had been closed so snow machines or big groups didn’t use it.

We walked south up the mountain on an old road, finding a flat area where the trail turned sharply. We walked into the woods about fifty yards and set up our tent, threw up our bear line, and cooked dinner on our canister stove just before dark, confident that we were invisible off the trail. 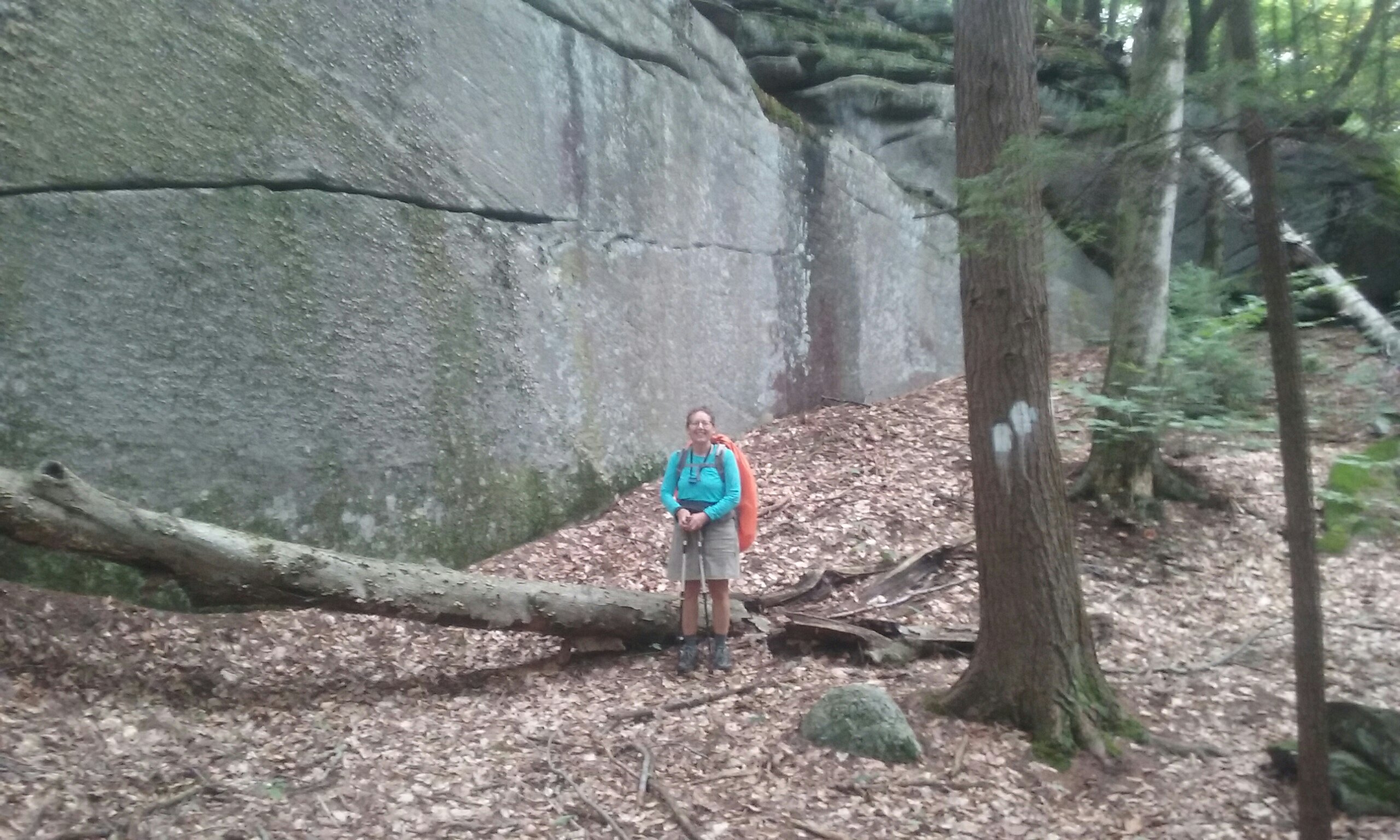