“I need a handyperson to come get this box of useful gadgets,” I said. I was stuck sorting a box of tape, a pair if shut-off valves, fence hinges, a wisk broom, string, dryer vent, window squeegee, and other sundry items.
“This is all useful to SOMEONE!”
I pecked out a quick Facebook message to one handyman I know.
Just as I finished, a green Ford Expedition stops at the driveway.
“Are you throwing away this workbench?” a woman calls out.
“Giving it away!” I called back. “Do you want it?”
She and her husband hopped out and happily loaded up the one-of-a-kind table my son and I had built for his sleeping jewelry making hobby. “This is high, just how I want, ” he remarked.
“Say, would you like some other items, good for a handyperson?”
20 minutes later, Patrick and Violet are driving off, the happy owners of two boxes of miscellaneous useful things PLUS the vision of owning their “dream” house – this one!
They were drawn in by the spaciousness, the two levels, the private and natural backyard and the clothesline!  “This is like being home in the Carribean.”

I smiled.  My handyman had appeared! The garage is getting emptied and my heart is getting filled. 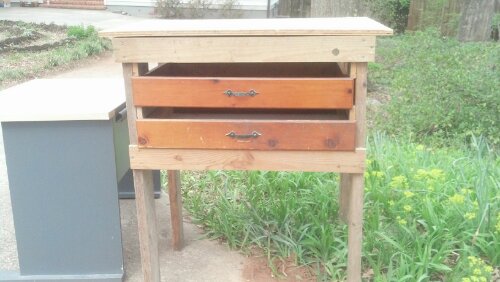