Things really got done in a big way yesterday! I splurged and hired Scott Barnaby to clear my backyard labyrinth. That made it easy to spread mulch on the beds! Wow! Now, it looks more inviting for a walk!

The other major accomplishment of the day was that my oldest son moved to his new apartment. It’s so great to watch our children doing adult things! He took charge of the whole project, and did it HIS way. He rented a U-Haul, loaded it up, with some help, drove off and got ‘er done! In the end, I was most touched by his offer to store some of my boxes of journals and photos – things I will want later but don’t necessarily want to haul with me now. “You’ve stored plenty of my things over the years. Now, I can do that for YOU”, he said. That lights me up!

There’s still a list of projects to do, and the birds are singing and  loving the fresh soil on the labyrinth. There’s a perfect branch suspended over the beds for keen-eyed birds to shop for their meal in the soil.

On to painting, sorting and resorting, getting just the right things to pack. And a surprise is on its way too! My friend, John, is off shopping for a camper shell for the truck! I’ll have room for more stuff now! 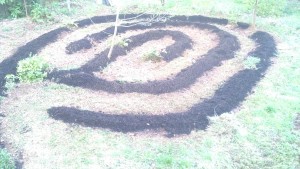