We got up at 4 a.m. anticipating a grueling 16-mile beachwalk through ATV land. We cooked our oatmeal and stored it in our Ziploc bowl to eat later. We made tea and coffee. That put us two liters of water ahead so our combined 6 liters could keep us safely hydrated.

We were ready at 5 a.m. We decided to take the road around rather than the short climb over the dunes to get to the beach access. On the road in the dark, patches of light danced in a directional rhythm on the treetops. The lighthouse! It’s crystal lenses sparkled. Its radial rays of light beamed out in a moving pattern. No International Dark Sky coherence here!

90 minutes’ road walk on the secondary road leading to the ATV Staging Area took us to the beach access. We had encountered no vehicles! We commended ourselves for our early traverse!

At the parking area there was a water spicket. We drank and filled a liter of water, giving us another bonus, with six liters between us for the day (in the desert, I would carry at least a gallon per day, but thought the cooler temps here would minimize dehydration).

The next five and a half hours were delightfully filled with southbound beach walking with an outgoing tide. Patchy clouds promised a colorful sunrise, the first hint being a thin band of pink on the western horizon.

To our surprise, though, no color show appeared. The sky simply got light and gray. It wasn’t until the sun was a good hand’s distance above the dunes that we noticed its white disk behind thinning clouds.

Through the morning, the sky show continued as portions cleared to blue then clouded up again.

Under our feet, the path of interesting beach trinkets provided a continuous guessing game of shapes – shells and sand dollar pieces, ribbons of seaweed, ropes of kelp. And our first starfish!

We were on the closed stretch of the beach for a while, meeting only gulls and flocks of tiny sandpipers that moved in unison, a few osprey in flight.

Half way through we crossed Ten-Mile Creek, actually a lot sooner than we had thought we would be there! We had to wade across in the swift knee-deep water. I took my shoes off, then kept them off for walking in the surf which was now in incoming tide.

This is the section where the ATVs drove. However, to our enjoyment, less than ten shared our beach walk! Their tracks were getting smoothed out by the tide.

At 12:30, John spied the sign for Access 115, Horsfall, where we left the beach! We had walked our supposed 16 miles in 7 hours! The wooden boardwalk with an observation deck at the crest of the dune made a perfect lunch spot to eat our hummus, stuffed into one of the “bread bowls” we had purchased in Winchester Bay the day before. Next stop was our camp for the night – Bluebill Campground, just down the road!

Ahh. But John had been hatching another itinerary! He had another adventure to add to our day! He realized that with half the daylight left, we could walk a beautiful stretch of coast separate from the rest – Cape Arago (air’-uh-go, an Oregonian instructed. “If you say air-ah’-go, we can tell you’re not from here!”)
To get to this three-mile coastal cliff walk, we called Yellow Cab for a 15-minute ride into North Bend, one of the few large coastal cities. We had Vicki drop us off at Safeway to resupply our vegetables. We requested a “timed pickup” for 4:15 to continue our shuttle. Our new driver took us all the way beyond Charleston to the observation area at Cape Arago, about a 30-minute ride (only $15!). Our driver was glad she had taken our ride because she had never been to the point on Cape Arago before. “I believe it’s time for me to be off-duty now. I’m going to stay here for a bit!” She proclaimed. 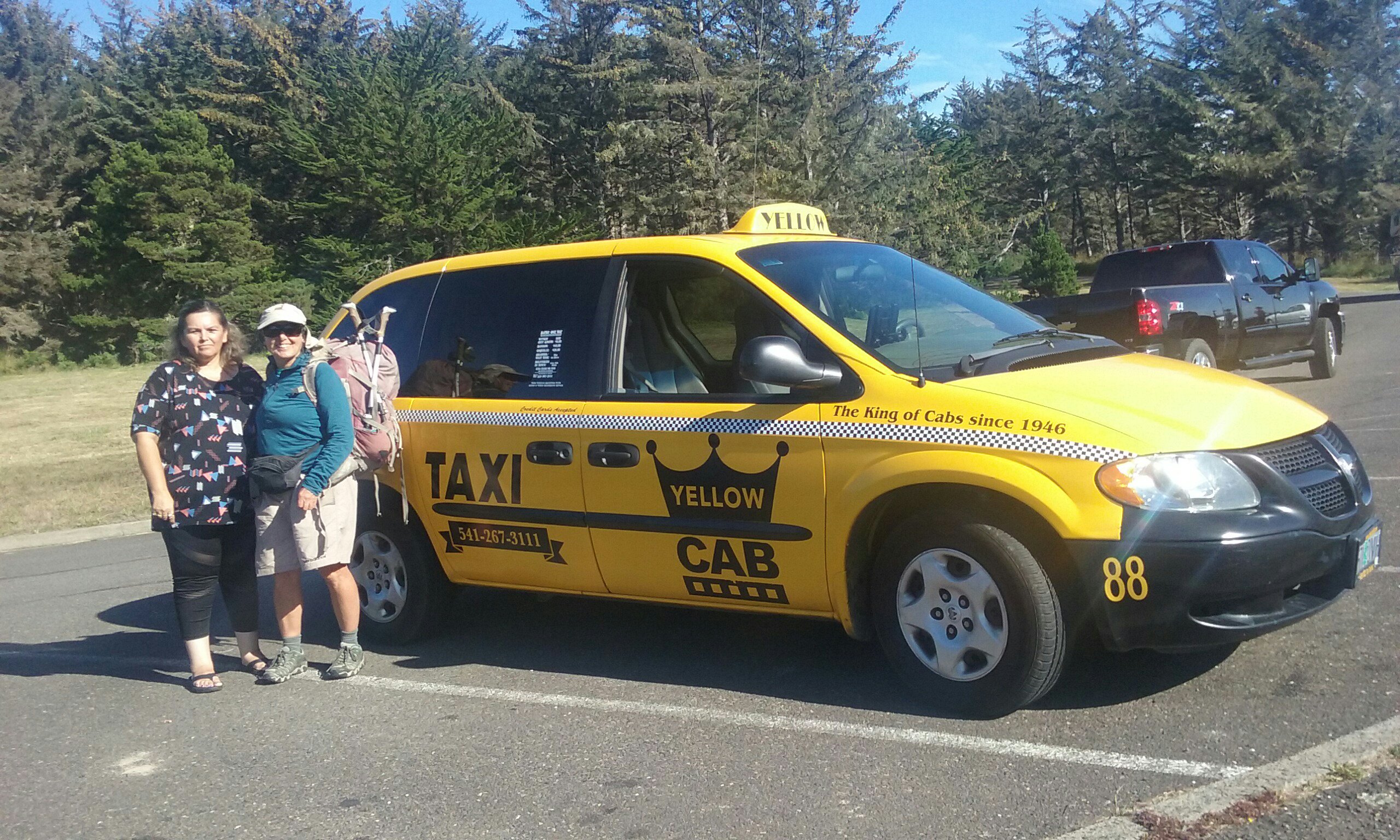 The first thing we noticed there was the barking of sea lions! A hundred, maybe, lolling on the sharp rocks off shore. We wondered if they were Stellar or California Sea Lions, not figuring that out from the interpretive sign at the overlook.

Then, we walked back up to the point and were mesmerized by whale spouts for another half hour!

We still had the day’s second mission to accomplish – walk the trail down the Cape to Sunset Bay State Park! The trail sign said 2 1/4 mile, but it seemed farther and more complicated as we followed the edge of the bluff through the woods. Along the way we passed through Shore Acres State Park, the former estate of an early 20th century businessman who had started the local logging companies. He had purchased 1600 acres along the coast and built a beautiful house and botanical garden. Sadly, his wife died young and the house burned down just a few months later. He remarried, built another house, had financial troubles in the Great Depression and moved away. The place was used as officers’ quarters during WWII, then eventually given to the State Parks. That second house is gone as well, but the Parks have rebuilt the gardens complete with pools and bridges.

The walk, though scenic with views over the jagged rocks and wildly crashing surf, rising like geysers above the craggy rocks, took us over two hours, including our final steep descent to the beach.

After going down one more path leading to an overlook instead of forward along the coast, John found a narrow trail that wound precipitously down the cliff and behind the cottages. We guessed where the Park entrance might be, found it, then entered the campground just before dark.

The Hiker-Biker Site was located towards the middle of the campground and already occupied by three other tents – bicyclists. There was still room for us, though, and we set up on the fine gravel surface. We had two challenges to address – finding an additional charging station since the two receptacles offered (what were they thinking to provide 2 outlets for four sites?!!) were taken, and to find someone with a can opener for our can of authentic Winchester Bay Albacore tuna.

Both puzzles were solved by a quick visit to the Camp Hosts, just at the next campsite! Cam offered me a spot on his electric box to plug in my wall charger. I’d get one battery charged anyway.

The tuna was excellent, together with rice noodles and broccoli. I decided to borrow one of the outlets from the campers who had their battery pack plugged in, and put theirs back when we went to bed. I need not have been so micro-managing because they came over soon and took their charger out! The woman said, “Hi! I think we saw you in Safeway!” Oh right! I remembered her too. In the Safeway in North Bend I kept meeting the same woman several times in different aisles. Funny, she remembered me!

I made a second trip over to the Camp Host’s to ask if there were food storage boxes. “No.” he replied. “The only thing that might bother your food would be crows in the morning.” We trusted his wildlife acumen and put our food bags in our tent and hit the sack!

Our “two-adventure” day had finally ended!