Labor Day Holiday…in which we hiked over a dune, walked the beach, got picked up by a boat, shopped at two convenience stores, a bakery, and a fish cannery, then walked a road to end the day at a state park Hiker-Biker site.

We started at a wooded campsite near Three-Mile Lake, half a mile from the beach, east of the dunes. The walk back to the beach seemed shorter than yesterday’s crossing! We walked south on the beach at low tide, making for quick and easy walking on firm sand. Most of our three hours of beach walking was in solitude, with no vehicles, nor even dogs allowed. We walked along dunes where Snowy Plover meeting grounds are protected.

The surf pounded and turned its rainbow of shades from gray to green as the sun climbed in the clear sky, sparkling on the smooth surfaces of curling waves. A bank of clouds on the western horizon glowed slightly pink, adding another band of color to the landscape’s palette. 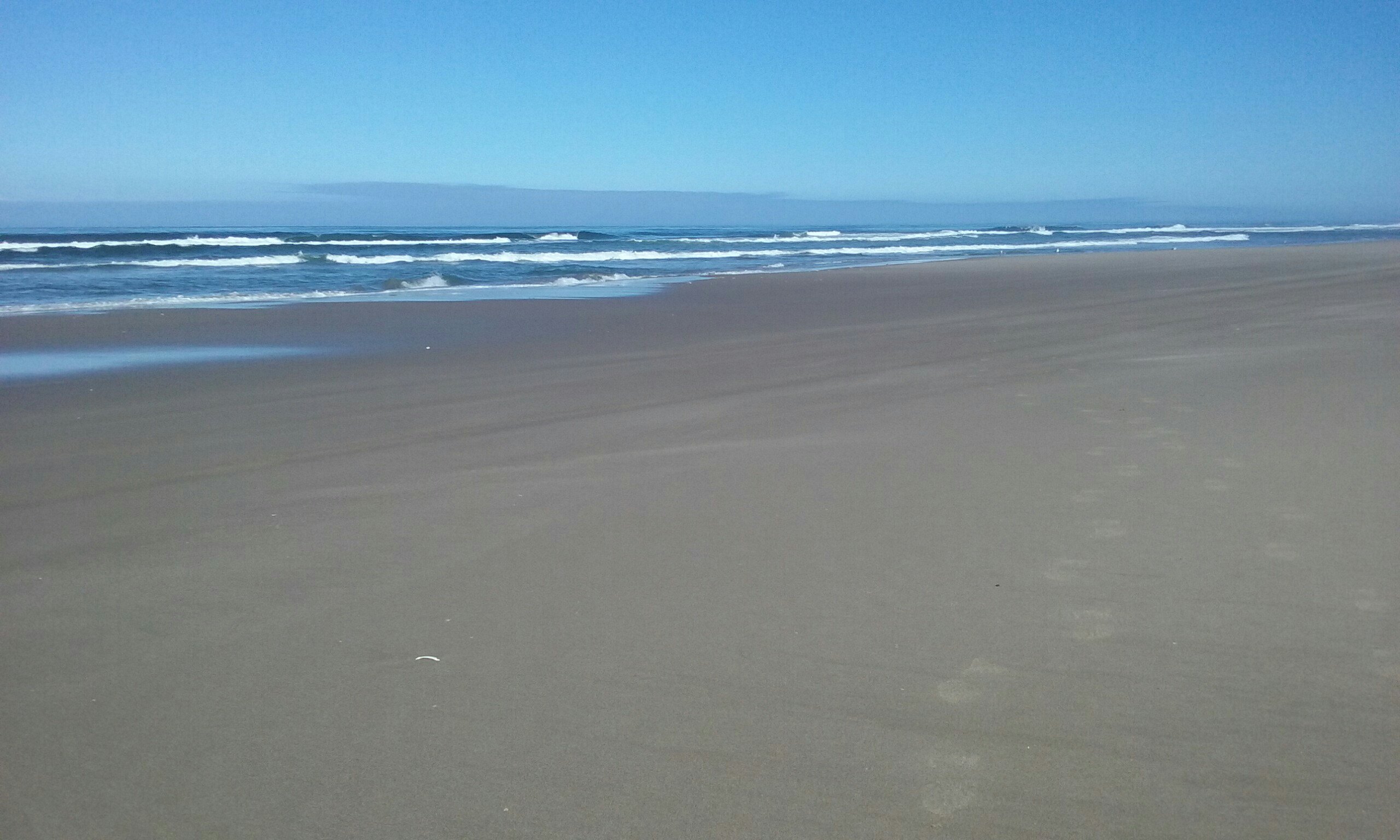 The sand was so smooth that I could keep my gaze on the distant gray band marking the end of our beach walk, moving my feet as on a treadmill, noticing only slight changes in scenery – dunes on my left, surf on my right, gray horizon ahead. Only when I looked down could I tell that I was indeed moving forward on the sand, stepping past stones, broken shells, pieces of crab moltings, feathers, and the footprints of birds. A moving meditation!

Osprey, flying over the crashing surf, dove, aborted their dive, hovered, dove again, coming up with a heavy catch. It seemed to take a lot of energy for them to gain enough height to fly away with their prey. One flew over us, a long, ropey object dangling from its talons. Snake? That doesn’t seem right. The bird gathered the rope into its talons, as John realized that it had caught an eel!

At the end of the beach, we abruptly climbed the huge, jagged black rocks of the North Jetty of Winchester Bay. We could call the Winchester Bay Charters for a shuttle across the Umpqua River, saving us a long walk around the bay! We walked along the soft beach and called from the end of the jetty. Twenty minutes later, a boat pulled close, but not close enough to board. The captain was waving us around! It turned out that we had to bushwhack about two hundred yards up river, around and through fallen trees and dune grass, to reach the spot he could land. He called, “I’ll pull in, then you need to jump aboard quickly. John hopped up into the bow. “Wait there!” Travis, the captain called. “I have to come back in!” He repositioned the boat. I heaved my pack up, but had trouble hoisting myself up the four feet. Made it! With John hauling me up by my pants and me tumbling into the bow. An unglamorous entrance to be sure, but just another adventure on the Oregon Coast Trail! 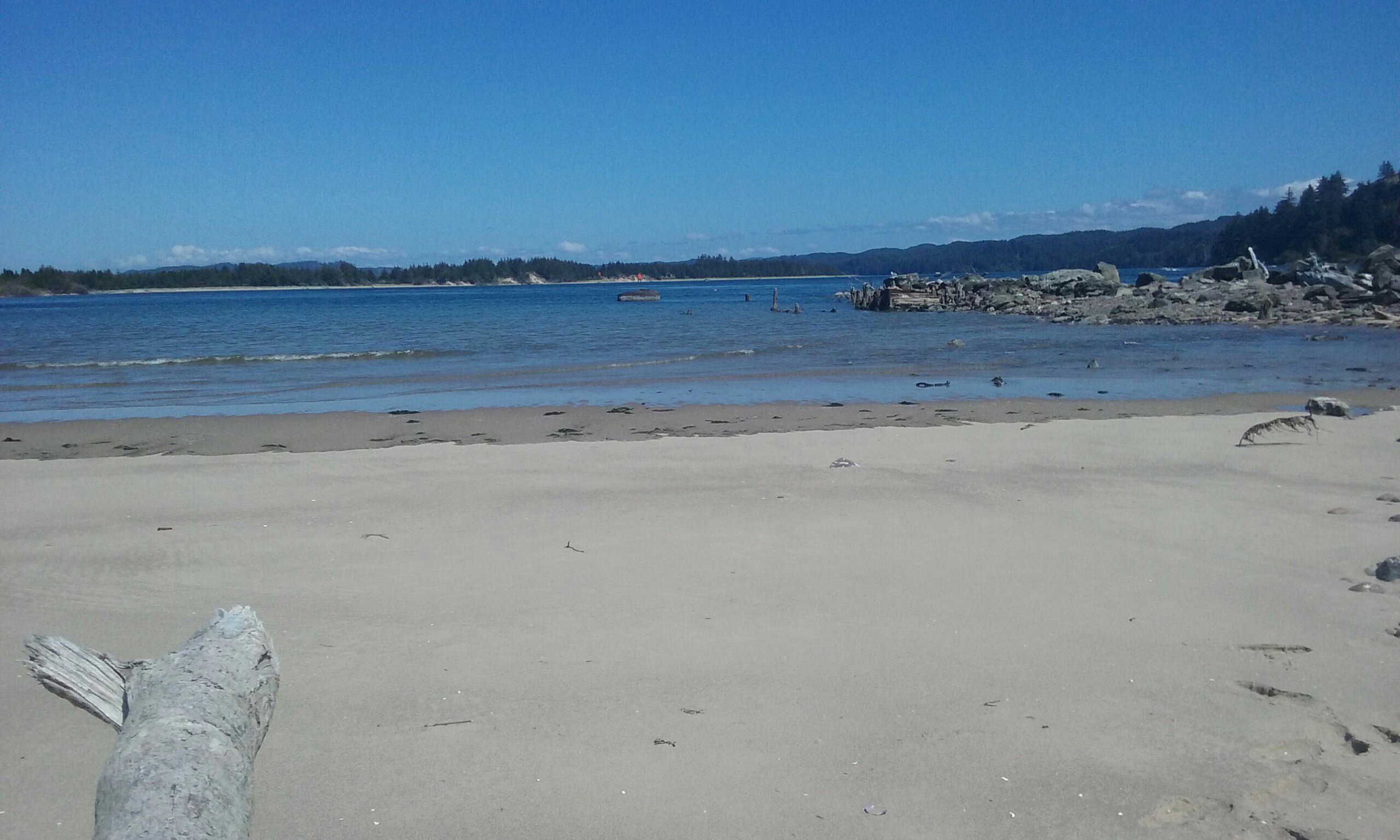 Where we thought our boat would arrive!

We spent a couple of hours in the fishing town of Winchester Bay, eating pizza at Beck’s Store, buying fresh bread at the Sourdough Bakery, cheese and ramen at the Pelican Plaza Market. There were no tuna packets available, which makes sense in a place where boats are hauling in fresh-caught tuna every day! The market owner suggested we try the Sportman’s Cannery and get some local fish. We walked out of town about 5:00 with a can of local tuna and a little packet of smoked salmon!

Tonight, we’re camped at Umpqua Lighthouse State Park where we met our first Oregon Coast Trail hiker! She’s hiking south like us, having just started in Florence which we left yesterday. We had fun talking with her about other trails and dehydrated food. And, she’s doing an impressive thing, too – carrying a “pack raft” to navigate the bay and river crossings! Amazing!