AUGUST 29. Two days after our town stop in Stratton, Maine, John and I  both felt energetic and happy. I said,  “What about today’s crisis?! We don’t seem to have a crisis!” John agreed. He said, “Well, if we do, we know what to do, “Pull our toes, eat some food, and play Satori!”

I began this journey, a walk on the Appalachian Trail from Mt. Katahdin, Maine, to Mt. Greylock, Massachussets, with the idea of pilgrimage – walking for inner change. That purpose is clearly unfolding as I walk with John, the man I met on my 2007 “thruhike” from Maine to Georgia.

On that journey, we had met in Monson, Maine, at mile 100. For the next several hundred miles we leap-frogged as trail friends. Often, we would camp at the same shelters, I would get up early, he would catch up, we’d walk together for a while, then he’d pick up his pace and get ahead. It always amazed me that I would see him again and each time I did, I enjoyed his company.

At this point in our current journey, we are camped at Piazza Rock, a massive boulder cantilevered 30 feet above the ground.  John noted some statistics:
*We have now walked 100 miles south of the famed Hundred Mile Wilderness, the first hundred miles south of Baxter State Park.
*Piazza Rock is 100 miles north of Pinkham Notch, a milestone in the White Mountains.
*It’s also half way between Mt. Katahdin and Hanover, New Hampshire, the gateway to Vermont.

On our solo journeys, we were secretly attracted to each other, both yearning for someone to share our passion for walking in Nature. We were both unavailable, however, because I was married and he was focused on reaching his goal. Separating, easily accomplished on trail with a simple change in pace, was a safe relationship strategy. That happened many times between Monson and Mt. Greylock.

Today, by contrast, we choose to stay together, and that’s where the inner change begins! What do two people who want to flee when relating gets tough do when the emotional terrain gets rough?

That’s where my “Energy Shifting” toolbox comes out – at least when I’m willing to pay attention to those emotional upsets and USE the tools!

This week we managed to “Use the Tools!” three mornings in a row. We’re starting to notice when we’re upset with each other or with a situation and bravely say, “I’ve got a Story”, or “I’ve got some feelings coming up.” Resisting the urge to plan out how we’ll get off the trail at the next town, divide up the gear and get outta there, we stop and agree to use the tools!

The first thing to do in these situations is to make sure we’re well fed and hydrated.  Stopping for a snack and some water often resets our energy. That’s the first tool – Eat!

My second favorite tool for shifting energy is to play a board game that gives us a new perspective right away – Satori. I carry a travel-size version of Colin Tipping’s Radical Forgiveness game. Satori helps us start with our Old Victim Story and end with a spiritually inspiring New Story and renewed ease being together. We realize that we are “healing angels” for each other and worthy partners. That’s the second tool – Play!

The third tool that comes in handy is a Reflexology manipulation I learned from my big sister, Claudia. Releasing the big toe promotes energy flow all the way up my spine to my neck. Pull!

We’re just about ready to leave Rangeley, Maine after a short visit to the IGA for food. When our Old Stories come up as we continue walking together, we’ll undoubtedly get more practice with emotional crises. Hopefully, we can turn our troubles into blessings with our trail version of Elizabeth Gilbert’s “Eat, Pray, Love,” That’s Eat, Play, Pull! 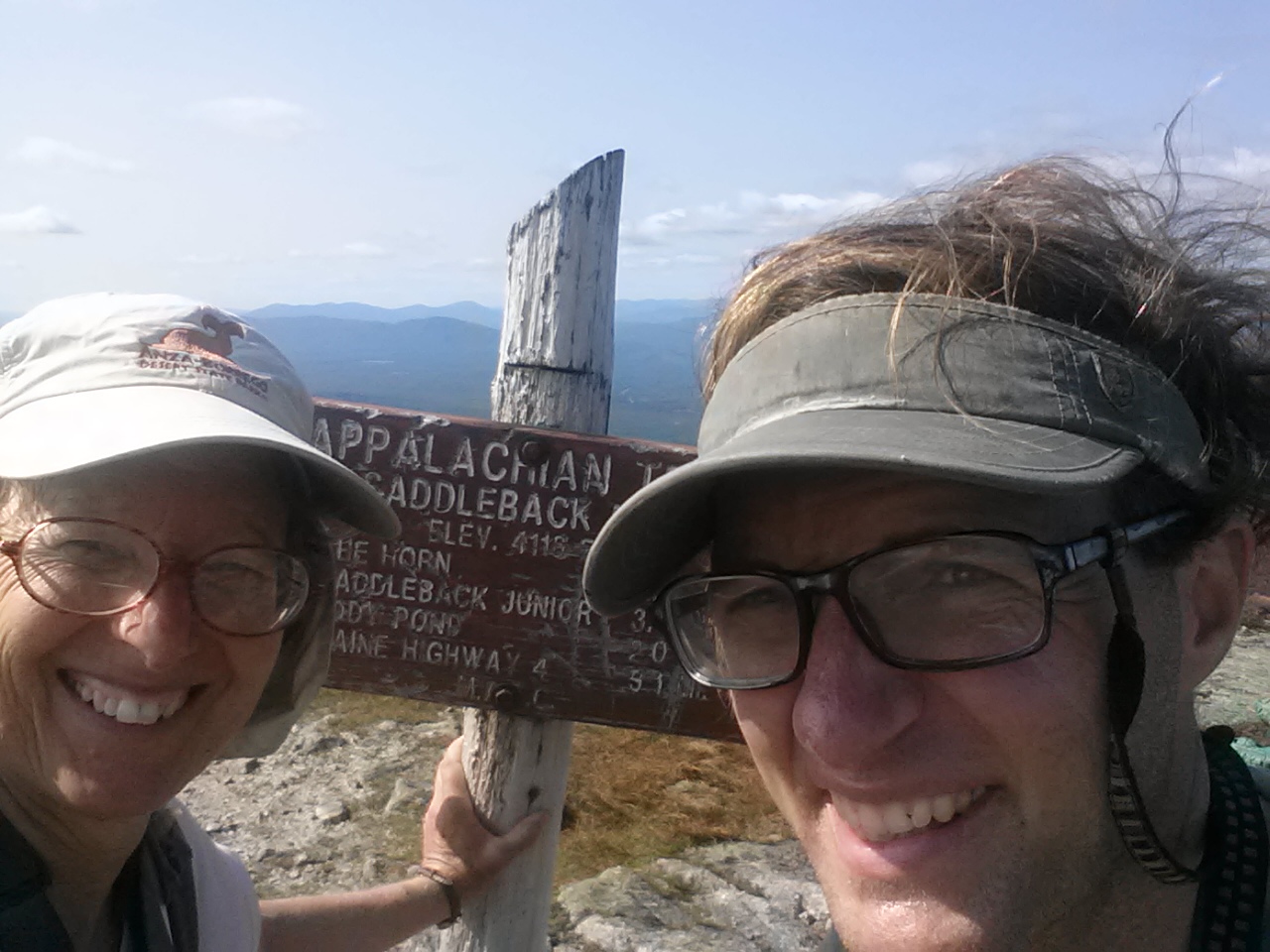 Partners on the Trail!