I watched the video of Mary Poppins, followed by Saving Mr Banks which reveals the story of P.L. Travers’ journey to signing over the rights to her creation. It was a Radical Forgiveness journey. How? The author had a S.T.O.R.Y., a Sustained Tale of Repressed Yearning. Mary Poppins had been Mrs. Travers’ characterization of her childhood experience with her dad, Mary Poppins playing the role of magical rescuer and someone who set things right.

I see something of MYSELF in her story. I’ve been reluctant to share my Appalachian Trail story, an important plank in a hiking coach’s platform, wouldn’t you think? Well, just like P.L. Travers, I have been reluctant to turn over my trail persona to the world. To do that would mean revealing a part of the story that still feels shameful to me. Letting the main character, myself, be on stage as a woman who accomplished her great feat of hiking the Appalachian Trail while cheating on her husband, is hard for me to tell.

Although I have since divorced, there’s still a lingering shame – that scarlet letter “A” – that I want to hide. So, freely sharing the truly human story of that lonely woman who embarked solo and attracted a partner on the trail, discovering what heartsinging partnership could be, mirrors P.L. Travers opening to accepting her dad as the man he was, and freeing her own heart. 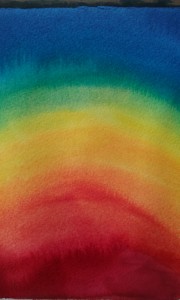 Simple wholeness and balance filled me during this immersion. The message I got in this immersion is, “All experiences are part of the wholeness. You did what you did, and that wove your story. As human beings, we choose all sorts of paths, actions, ways of being. Guess what, Regina? You are not the first nor the last woman to discover and express her heart, her need, her self through sexual activity. The guilt, shame, self-loathing you attach to that comes not from TRUTH, but from patriarchal bigotry that puts women in emotional slavery. To be willing to tell your story, claiming it as your human story, could be healing for just the women who can be set free by it.”

Well, today, I can hear that intellectually. And I’m willing to put this out in my blog. I am open that my soul is adjusting its balance with a New Story. How about this one: The more I show up as me, with the story that I’ve played, the more my true purpose is fulfilled and those I’m here to serve find me. I am lovable just the way I am! Mr Banks is saved – and so am I!!

Does this story resonate with you? Do you have a story, a dream, an expression, a yearning that you are afraid to fulfill because of an untold part of your past? Is something blocking you from your goal? Perhaps you don’t even know what it is, just that somehow you can’t seem to take the steps toward something you really want to do? I can help! I recognize it and have steps to take. The first one is to be open to loving yourself in YOUR story, just as you are.

Let’s chat about it and get the conversation started. Get on my calendar for a 20-minute Next Steps Chat and start your journey to freedom, more energy, a new sense of self……………………

20-Minute Next Step Chat with Regina