“I simply won’t walk through the tunnel,” I said. “I will ask at the parking area until I get a ride.”

That’s what I had said about the tunnel cut through the mountain on US101 just south of Heceta Head. It would be our challenge for the day, and the only place I flatly refused to walk on the Oregon Coast Trail. Oh sure, I didn’t like walking any of the stretches of 101, but this one seemed outright suicidal! Bonnie’s guidebook said, “just make sure there are no motorhomes coming when you walk through.” Say what? There were RVs every twenty seconds! We also heard about a button hikers could push that turned on a flashing light warning drivers that a bike was in the tunnel. But how long did it flash? Long enough for walkers to get through? My decision was to stand firm on my no walking stance. I was confident that I could meet someone who would give us a ride.In fact, I had done just that the evening before at the Carl G. Washburne State Park Campground! At the bath house I had met Rachel, who admired our adventure. She had said, “I would gladly take you tomorrow morning – if we were staying here tonight.” They were headed to the campground from which we had just walked, Rock Creek. Her response certainly encouraged me that others would find our request reasonable.We got an early start, taking the campground road out to 101 and crossing over to the trail to the beach. I was stunned to see the highway completely quiet! It was 7:45 a.m. and there were simply no cars on the road! “Now, this is the Oregon Coast Trail I would like!” We knew the quiet would soon and and we chose the trail to the beach. At the trailhead, we noticed a bus schedule posted that indicated a bus leaving from this entrance to Washburne Park at 9:20 a.m. and 12:20 p.m. “So, this bus can be a backup if we don’t get a ride!”

We had a half hour or so on the beach until we found the fluorescent green sign with a black number indicating an access point. This one was for The Hobbit Trail, conjuring up visions of lush greenness. That was basically true, as we climbed up into the spruce forest, laced with ferns, getting a long view of the beach we had just walked about 30 minutes earlier. 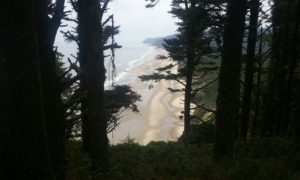 We headed for the Heceta Head Lighthouse, which first appeared below us like the cap of a carnival tent. 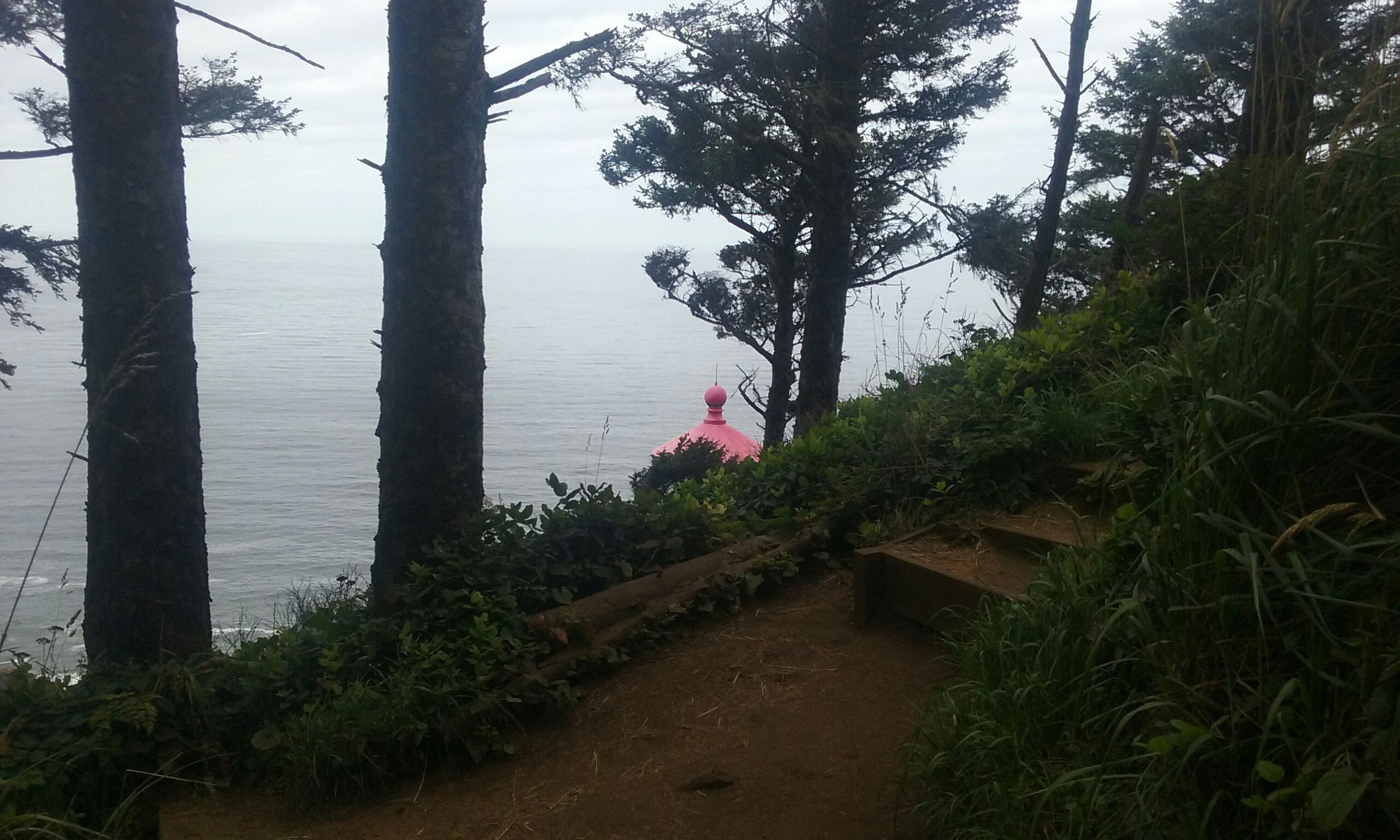 We visited the lighthouse for a while, I making use of the time chatting about birds with a woman studying the rocks below through binoculars, and casually mentioning that our challenge for the day was to find a ride through the tunnel. “We’d gladly give you a ride if we were going south.” She assured me. “We can do this!” I rejoiced. Meanwhile, John had been searching on Google and found a taxi in nearby Florence that could pick us up if needed. We had another backup.

A half hour walk took us easily down the hill to the parking area. I surveyed the people and decided to ask the man striding solo down the lighthouse path toward the parking lot, keys in hand. He responded to my inquiry with a quizzical look and a non-English dismissal. “Not that one”, I chuckled, undiscouraged. “There are plenty of people here!” I noticed a woman wearing an orange safety vest. She approached me, handing me a clipboard. “I’m Tara, from the Cape Perpetua Cooperative. Would you please take my survey?” “Sure!” I replied, then added my own proclamation about needing a ride through the tunnel. “Well,” she said. “I’ll be here another twenty minutes or so, then I’d be happy to take you through the tunnel!” Done! That was easy! We had our ride, and a very interesting one at that. We learned more about the partnerships supporting environmental and trail issues along the coast, and helped her a little too, to understand what an obstacle this tunnel is! I felt like we had met a colleague, not just another tourist! Oh, and as we left her car at milemarker 181 where the trail returned to the beach, John said, “We crossed the halfway mark – in your car!” 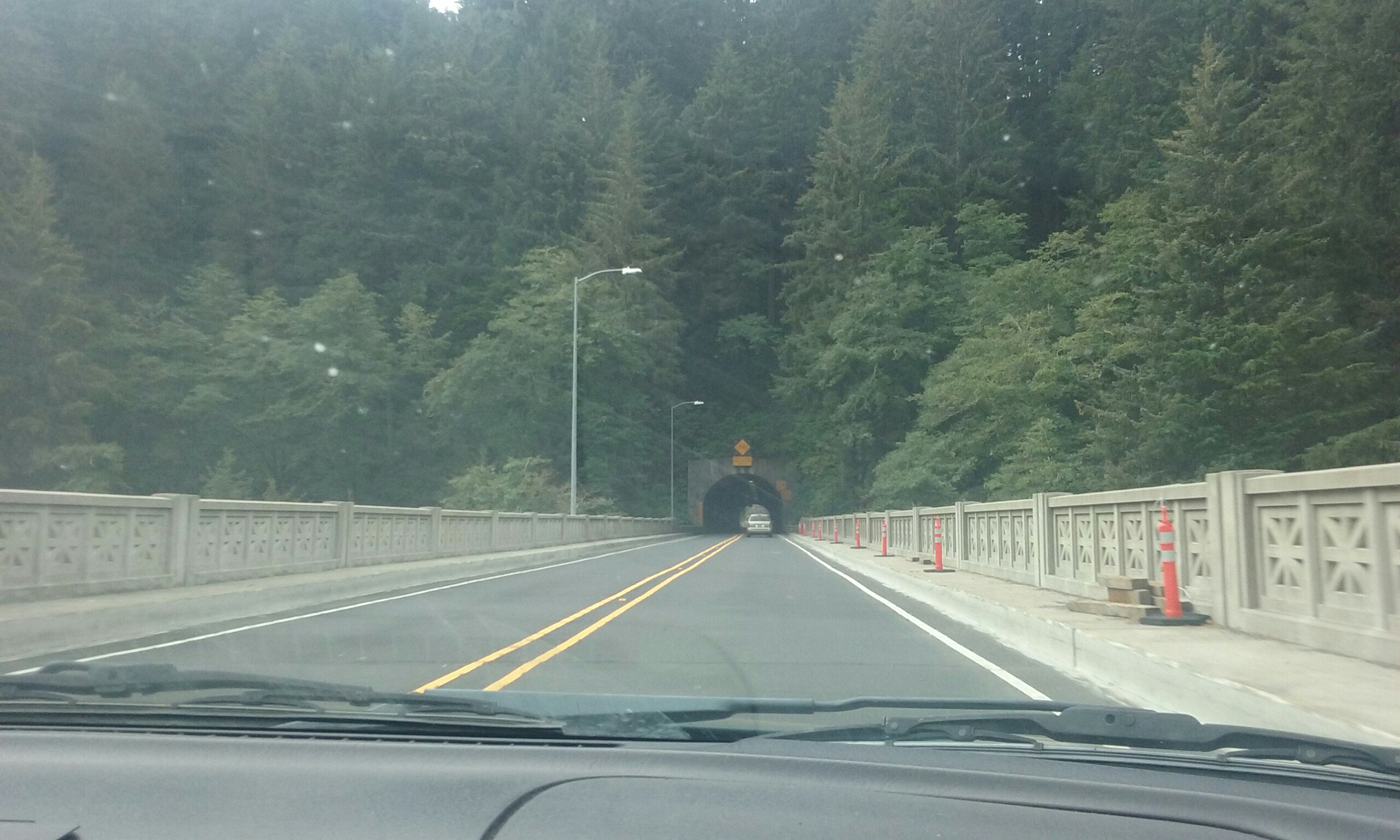 That’s the tunnel! Not as long or as dark as I had imagined, but still formidable!

Although our tunnel ride was the logistical highlight of our day, there were a few more memorable moments during our 6-mile beach walk that ended at the North Jetty in Florence, Oregon.

And now, I’m writing this at 10 p.m. on Saturday night, August 31st after a full day of rest and reflection. Our hotel is a block away from Safeway, where we’ve shopped twice, and near True Value Hardware and Dollar Tree. We’ve got a full fuel canister and have indulged in epsom salt soaks, soothing our aching feet and John’s rare blisters.

This rest day also gave me the chance to watch the livestream of a very special event – the Celebration of Life for my teacher of Radical Forgiveness, Colin Tipping, who passed away on June 28th. It was a reverent and heartfelt event. I’ll watch the 90-minute program again, I’m sure! I invite you to watch as well, to learn about his endearing contribution to humanity and his vital legacy represented by Radical Forgiveness, the healing technology that he authored and taught, leaving several hundred coaches like myself trained to carry on this effective work – while he guides us in spirit during this next pivotal time in humanity.

And now, on to the southern half of the Oregon Coast Trail!