Although I have been disappointed by the roadwalking along 101, my suffering pales to that of Amanda, the Yachats woman, and the thousands of others, who were cheated out of their homeland here, tortured, murdered, and forced to walk along the lava rock coast to an encampment. It would have taken great foresight to preserve a natural coastal corridor for our trail, yes. Even better would have been to ratify the treaty in 1855 giving the original people their twenty-mile wide coastal area.

Today’s walk took us off of US101 for quite a number of trail miles. Trail advocates had arranged for several miles of the trail to wind around through the coast houses, vacation homes, and resorts. The route is called The 804. On this day, it was well-populated with day walkers enjoying the cliff lands, staying back from the edge where signs warned of fragile cliffs, and a memorial reminds us that two “strong young men” had been swept off to drown by a “sneaker wave”. We stayed back and watched the crashing surf billow over the rocks. 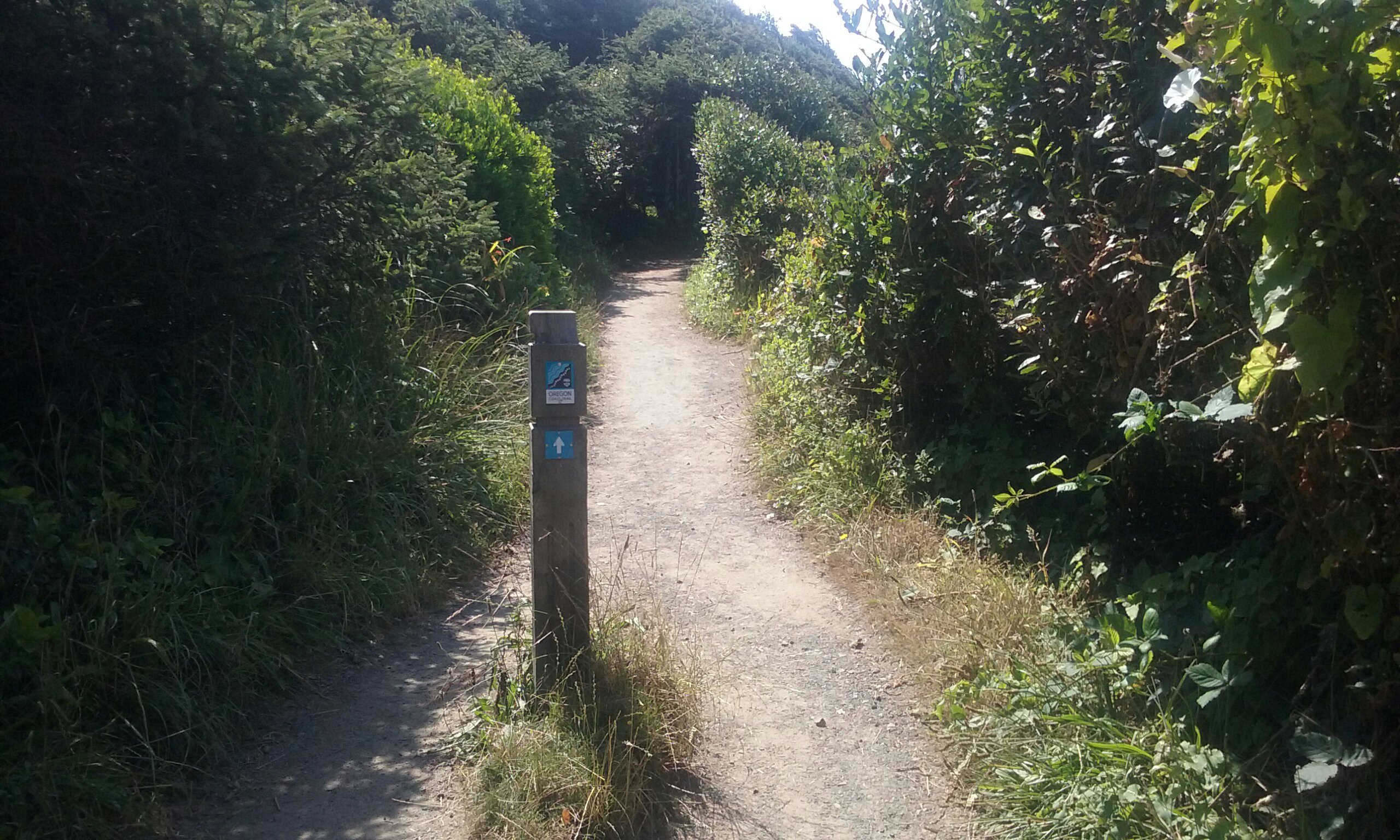 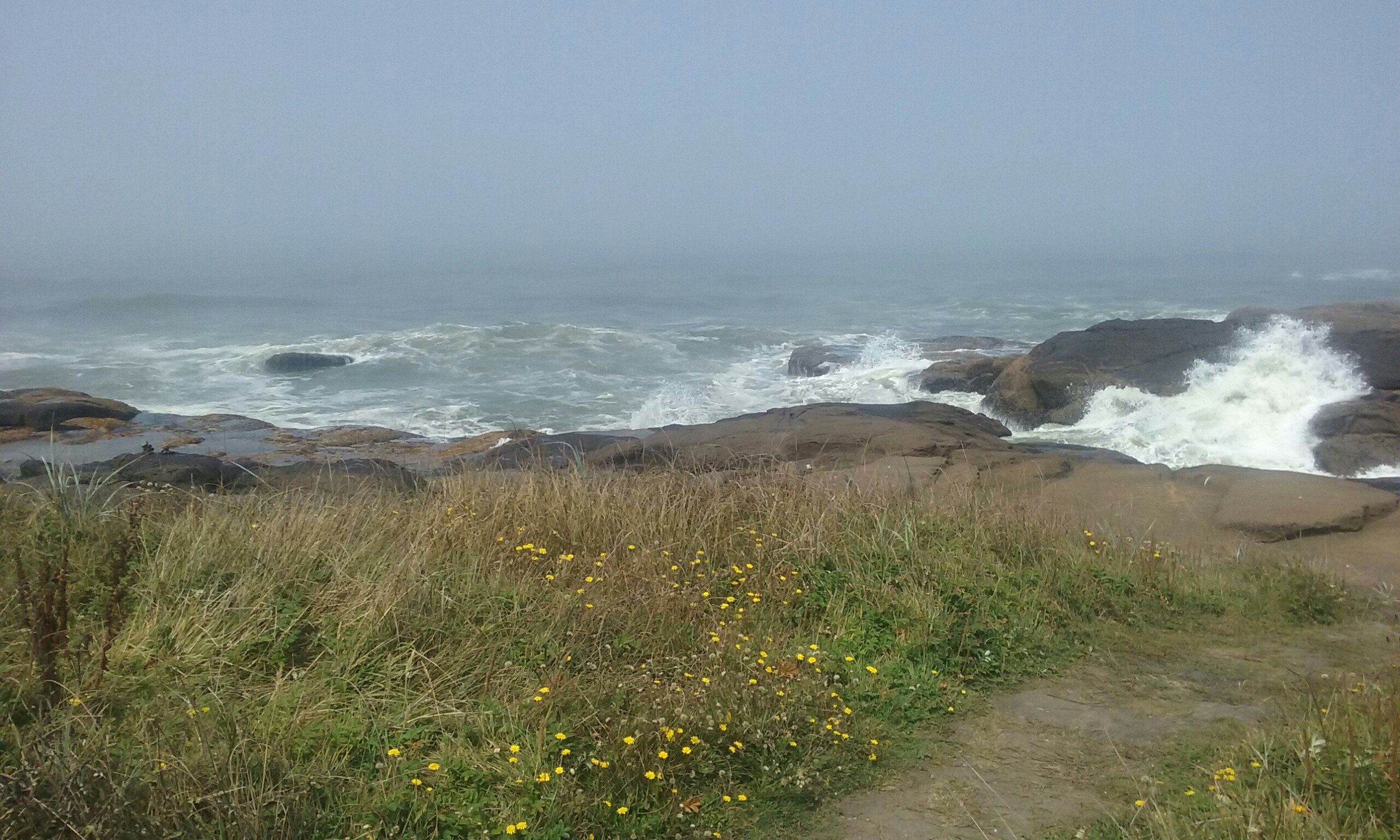 Later, another trail wound up a steep hill on the east side of the highway. The signs admonished us to respect this private land where we had permission to walk on “Amanda’s Trail” to Cape Perpetua. Along the way, we visited the statue commemorating Amanda, the Yachats woman who had been forced away from her daughter and white, unmarried spouse when the cavalry came to drive off the native people in the 1850’s. No one knows if she lived or died, but her story reminds us of the genocide our America has perpetrated more than once. 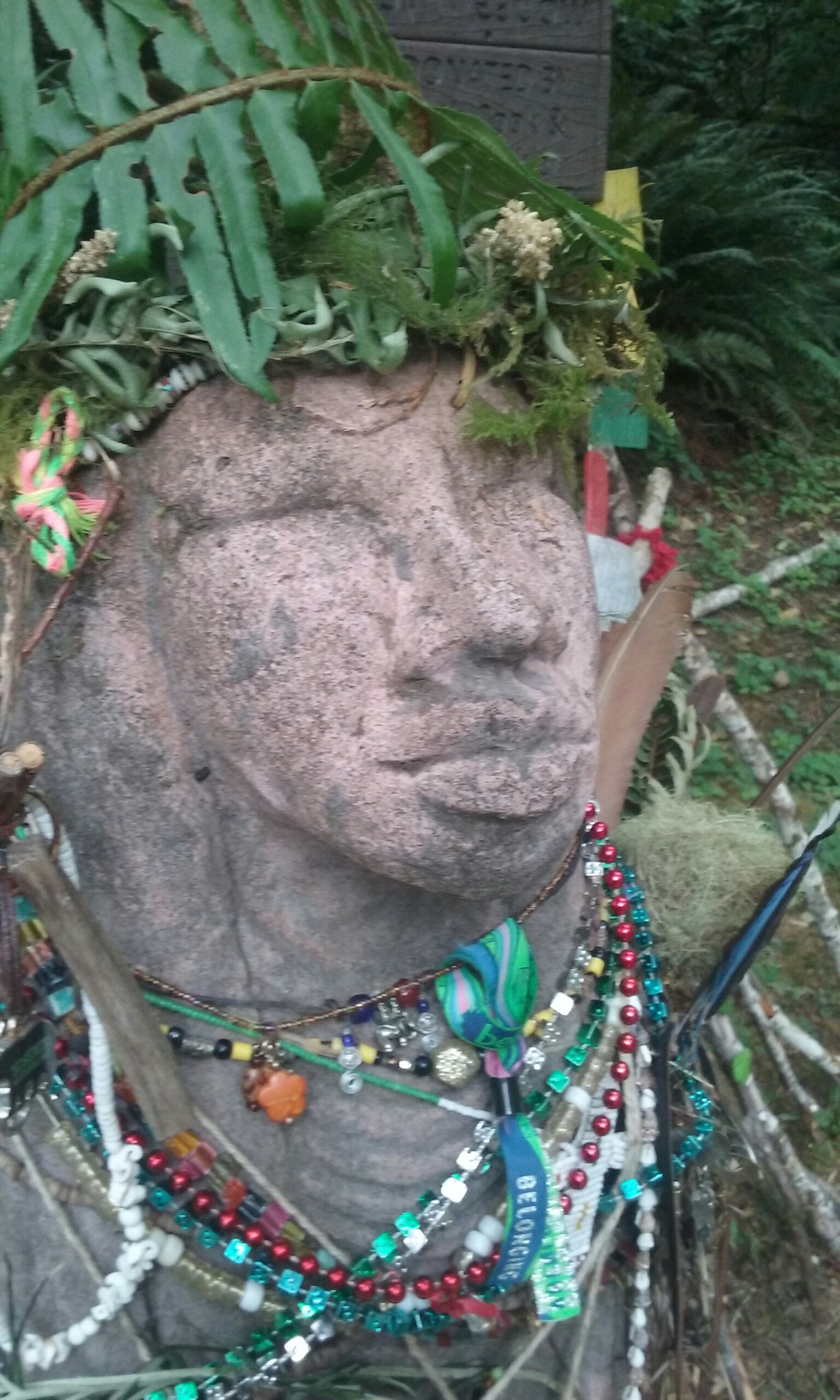 We talk somberly about the topic as we climb the rest of the mountain to another period monument at the crest of Cape Perpetua – a CCC rock shelter. 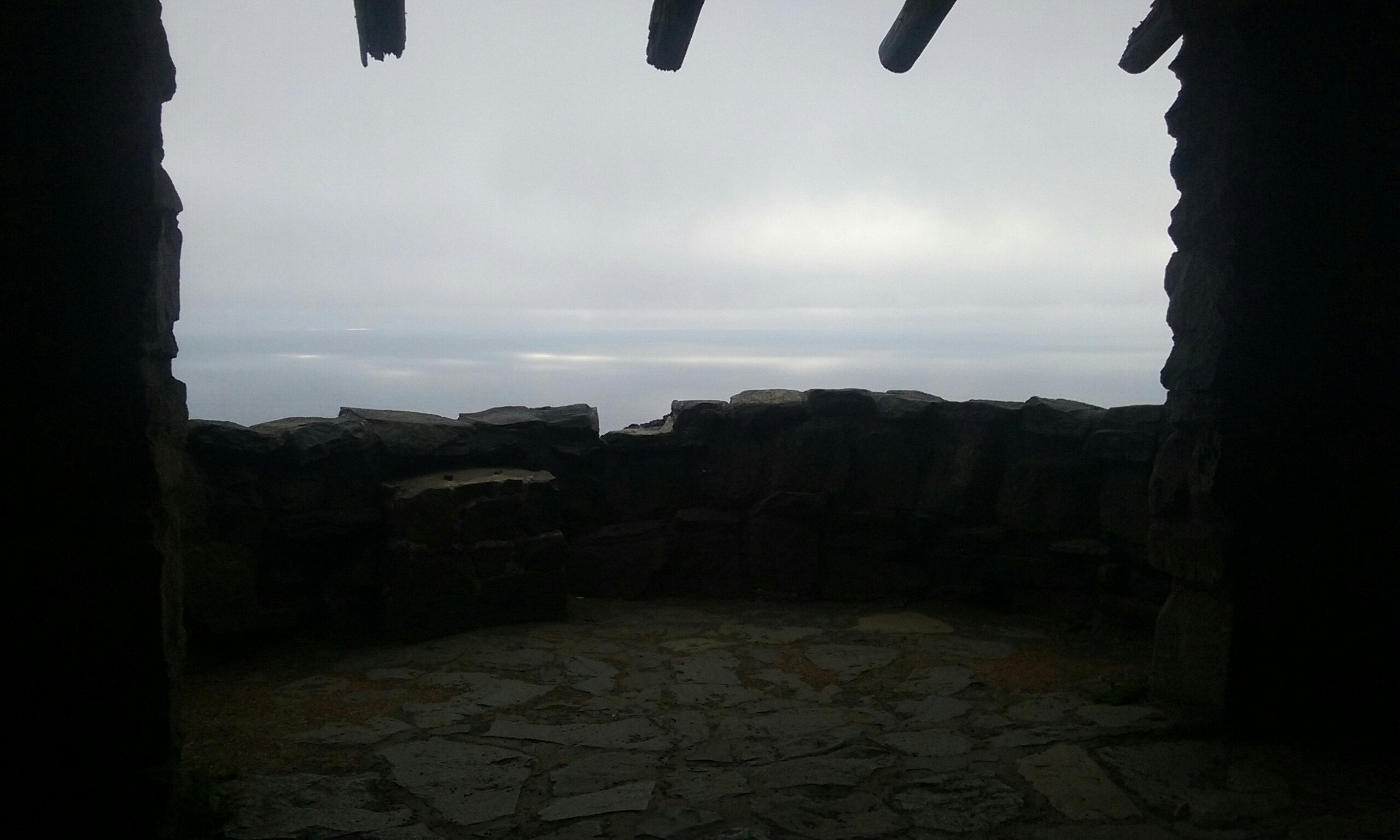 By this time, it’s late afternoon, and we still have a few miles to go to the Cape Perpetua Campground. The overlook is suddenly rain, dark, and windy so we don our rain jackets and hats. Twenty minutes later, we’re peeling them off because it’s dry and warm below! We learn that this effect is peculiar to the high elevation spruce forest that traps moisture that drops off the trees like rain!

We descend quickly, and soon drop off into the USFS campground, our destination for the night. We see the Hiker-Biker site listed and head for it. However, we meet the campground manager on our way. He takes our ten bucks and we walk back to site #11, unusually far from the entrance, but closer than our other option, site #29A!

To our dismay, though, Site #11 is literally a blocked car slip with a picnic table on it next to a ten-foot wide strip of grass. Although we look at other sites, we decide to stay there, grumbling about the layout. I held my tongue, but wanted to say, “We come without a car, so we get to BE a car and have our table in the parking slip.” I add this to my growing list of quandaries for the makers of this trail. Just what are/were they thinking hikers are like? I sleep with my hat pulled over my eyes to block out the headlights that go by during the night. It’s yet another chance for me to do The Thirteen Steps to Radical Forgiveness. Grateful for the tool, I choose peace. 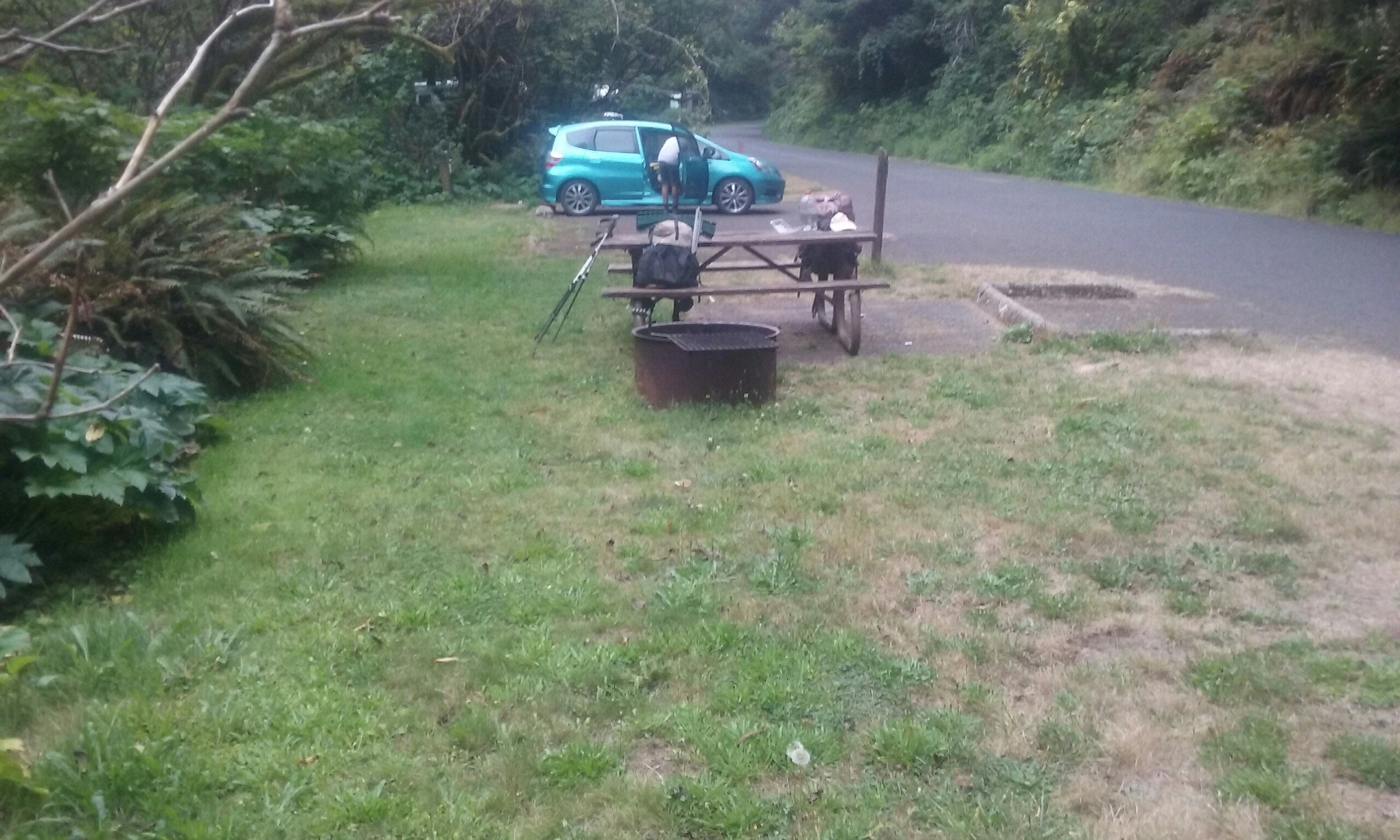