We got an early start from our tent site a couple miles south of Rt. 66 on Beseck Mountain. Our first section was through Powder Ridge Ski Resort. Our first clue that we were getting close to it were two 6 ft square vinyl tumbling mats lying in the trail. One was beneath a pole lashed across the trail between two trees about 8 feet up. We had no idea what it was for! Just up ahead, though, a side trail marked with caution tape and a trailbike route sign have us our answer. The ski resort has bike routes too! It was 8 a.m. on Sunday of Labor Day weekend, so we were glad there was no bike event there that day!

We passed the empty and silent ski lift, then a gazebo decorated with a withered garland. A wedding, perhaps? Again, the only signs of a romantic event were the garland and a circle of plastic cups and wedding programs. Too bad the wedding party left these telltale bits of litter!

In an hour or so, we reached our first road of the day, Rt 68, which meant we would soon encounter one of eight designated campsites on the trail. This was the one time on our walk that we didn’t reach or exceed our preplanned destination. That’s because reaching this site, Cattails Shelter, would have given us a twenty mile day! Too far with this rocky, roller coaster terrain.

Well, here we were, at 10 a.m., visiting Cattails Shelter. Jeanie, the other southbounder who was now a half day ahead of us, had probably stayed there the night before, writing in the shelter register, “This is the cutest shelter I’ve ever seen!” We agreed that it was cute, even if it wasn’t practical. We doubted that it would be rain tight. And, we had just filled up our water containers at the last stream, a mile back, so we didn’t need the water offered in reused jugs. We wrapped up our short visit with a snack of sweet potatoes and continued south, glad we had slept in the woods instead of here. 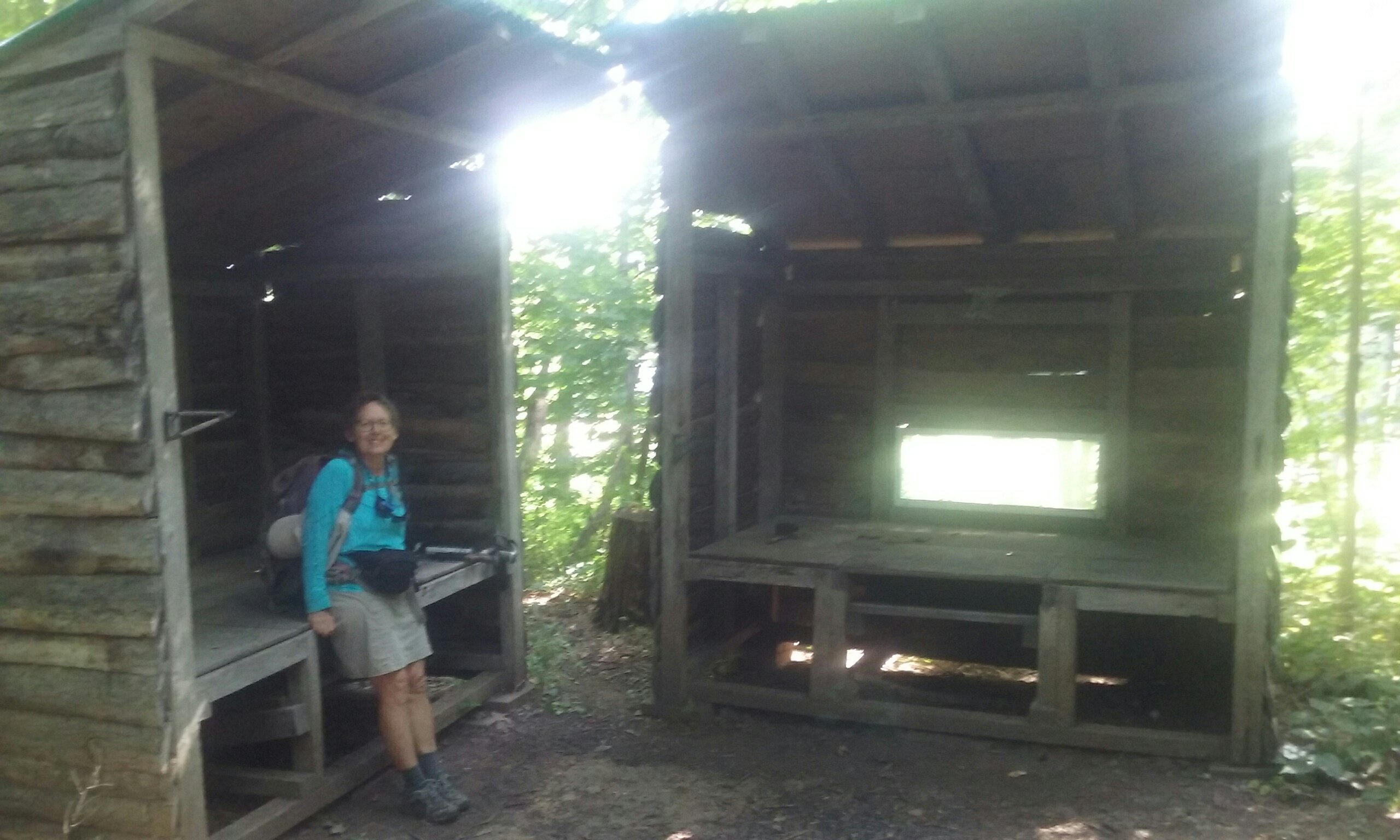 The day’s walk unfolded in three distinct sections between roads. I’ve become accustomed, if not appreciative, of the way this trail takes short, and remarkably steep ascents and descents. This day was no exception. One section took us in view of the previous thirty miles of trail, the part that snaked west to east near Meriden. We saw Castle Craig, where we had been the day before.

We continued along this ridge through Trimountain State Park. Up and down all afternoon! We thought we had seen all the steep climbs we could until one crushed-rock slope, practically straight down! We gingerly picked our way down, happily landing uninjured at the bottom, suddenly crestfallen when we realized that the blue blazes trail had turned, following the scree (loose rock) slope to the west! We picked our way twenty feet back up the insanely steep crushed rock path and dutifully submitted our ankles to the scree. Thirty feet later, the trail turned again to the bottom, rejoining that smooth old road we had mistakenly followed ten minutes before! It had become so annoying how the route kept taking us on the most rocks, the most steep way, and not missing any rock outcrops. 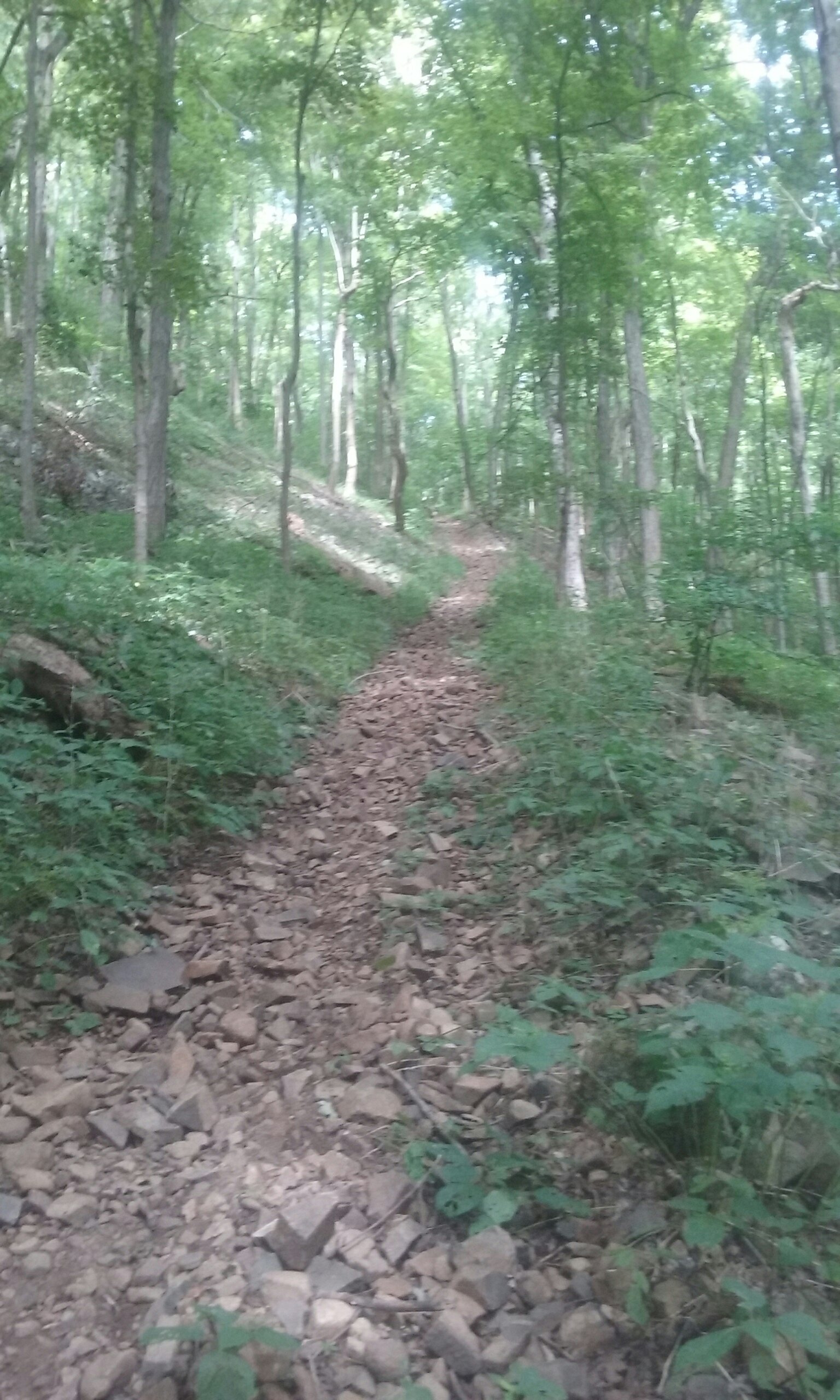 Late afternoon brought us to Rt. 17 and a welcome supplemental food stop. Just 50 yards from the turn at Stage Coach Road, we reached the Country Store, well-stocked with food, deli, even miscelaneous hardware and housewares. It didn’t sell gasoline, which so many convenience stores have. The Continental Indian couple running the store graciously accommodated us in the deli with a generous tunafish salad sub, eaten at an inside table. We also found fresh produce, choosing a cucumber, a red pepper, and a peach. I also added an 8 oz block of cheese, its fat providing the slow burning fuel we had missed the day before. 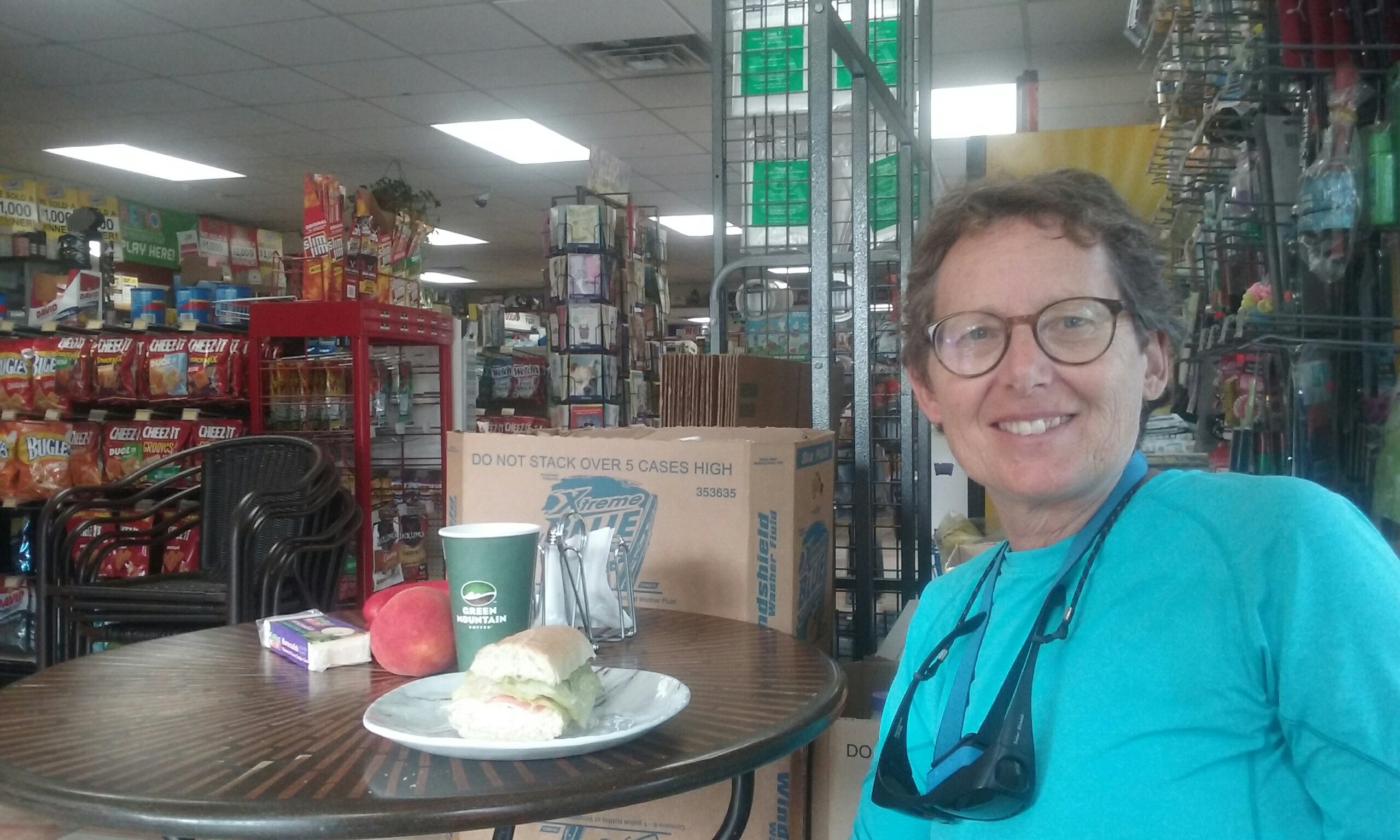 Now we were ready for our evening rock scrambling. This section took us up again, this time to our last time at 750 feet of elevation in a park called the Northwoods, in the Town of Guilford. We looked down on a little pond.

From the Northwoods, we descended again to Rt 77, then kept going into an area called Broomstick Ledges. The moss covered rocks and intermittent stream created a gnome land, inviting and mythical. Our reverie, however, was jolted by the domineering sound of somebody’s amplified music coming from a nearby property. Labor Day Weekend festivities were spoiling our soundscape. Ugh!

We kept charging on, winding around on a thorough tour of Broomstick Ledges, until we were freed to reach another landmark, the split of the eastern spur of the New England Trail! This was mile 214 for us, just over 16 miles from the southern terminus!

We took the right hand path, looking for a place to slip off the trail and set up our tent. We had walked 16 miles, quite enough for a day!