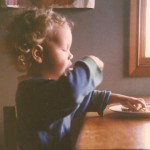 I cried when it was time to leave Arlington VA after living there for 6 years. The thought of not having China (pronounced “cheena”) to watch David, my five year old son, drew a blank. Five years of delightful friendship and child care swapping had created a sturdy foundation for mothering that I feared would be hard to rebuild way out in Indiana where we were moving., I had tried to match the time that David had played over at their house with having Elena play with us, but I’m sure he was there more! I give myself credit for taking them out on “adventures” like exploring the creek at Lubber Run Park, that I had hoped would balance the indoor play and television viewing they did in China’s care.
It was a good trade, because David and Elena played well together!

Elena was our landlady’s daughter, born just a few weeks before our first child, six months after we had moved to Arlington. John had gotten a job at the Washington bureau of the Scripps-Howard News service. It was prestigious to be a reporter in Washington when Ronald Reagan had just started his first term in office.

The day we left our half-remodeled house in covington KY was the sub-zero day that a jetliner plummeted into the frigid Potomac River, too heavily laden with ice to lift off. John arrived on the job with everyone’s attention riveted to that story, threatening to eclipse Reagan’s inauguration.

For me, though, having a good place to live was more important than either of those stories. I was four months pregnant for the first time, just beginning to “show”. I was grateful for having taken my sister’s suggestion to honor myself with the purchase of a beautiful down coat and leather boots from L.L. Bean just a month or so earlier. They kept me warm and well dressed during that cold snap of Janauary, 1982.

I was also grateful that John’s cousin, Jessica, had introduced us to Sue Campbell, the friend of her co-worker,Jacomina, at The World Bank. In early December , when we had made a quick visit to the area to locate a place to live, Sue was the one who showed us the white bungalow on Lincoln Avenue, just two blocks from the Virginia Square Metro station. I don’t even remember looking at other places because this place seemed perfect! It was a cute, two bedroom house with a yard and a garage in close proximity to easy public transit to John’s work.

Sue handled all the rental details because the owner, Jacomina (yahk-o-meena), a Dutch woman who had recently married and moved to a new house, was working abroad during our househunting visit. In fact, it was a full month or so before we met her.

Sue was our contact concerning the house, and we saw her regularly because she parked her car in the driveway and walked over to the Metro station on her way to George Washington University where she worked. Parking there saved her a lot of money and gave Jacomina a housesitter! Her brief morning and evening greetings, with occasional conversations to field my questions about my new home, were welcome as I got comfortable with the area.

When Jacomina returned, we discovered we would both be delivering our babies at about the same time! We were quite different, however, in our lifestyles, giving me the opportunity to honor diversity. Sometimes that was a challenge for me because I wanted my way to be right, but Jacomina was so friendly and open that I soon discovered that our different ways could co-exist.

While I was exlploring the local services for homebirths, playgroups, and macrobiotic classes, Jacomina was researching hospitals, breast pumps, and nannies. At one point, I even entertained the idea of offering childcare myself, but couldn’t compromise my unwavering belief in the superority of the stay-at-home mom for the optimum care of newborns.

That belief did not keep me from happily meeting China when she started working for Jacomina and her husband, Don, shortly after baby Elena arrived! I watched with intrigue how they created a tri-lingual household, each speaking their native tongues. Elena heard only Dutch from Jacomina, English from Don, and Spanish from China. Elena didn’t speak much until she was about four, but when she did, she was fluent in all three languages! I was impressed!

For the next five years while David and Elena became playmates and both greeted younger brothers, I continued to appreciate the generosity and friendship of Jacomina, Don, and China, despite our differences in opinion about childrearing. Jacomina gave me the chance to honor people in their unique self-expression, starting with myself.

There was another time that tears flowed in my friendship with Jacomina. It was 20 years and another relocation later that I received a letter from her. She had sought out my address from my cousin so she could thank me for having been true to my beliefs all those years back in Arlington. In her letter, she was describing how her beloved Don had finally been released from his life-ending fight with cancer that had been made much more tolerable with the macrobiotic diet he had adopted. “It was your modeling that inspired us to pursue that way, and I wanted to thank you for leading the way.”

I cried, realizing that I had no idea at the time that being true to my own convictions, even when they seemed so different from others, would inspire someone!

Today, I’m grateful for Sue, China, Don, and Jacomina for blessing my life, and those of my sons David and Adam, with generosity, humility, and respect for others! They taught me to embrace cultural diversity in real life!

Do you have a time in your life when something you believed or did seemed so different, even contentioius, from others but they later thanked you for it! Let me know in the comments, below!

Posted in Sixty Years of Gratitude.