My youngest brother, Paul, was so cute. He gave me the excitement of having a child without the responsibility. My mom was pregnant with her tenth child when I was a high school biology student. As my luck would have it, our unit of study was Human Reproduction.  “How fascinating!” I thought. “I can study my mom while she’s pregnant.”  When Paul was a toddler, my photographer friend thought Paul, with his angelic blond curly hair, a perfect subject for black-and-white photo practice. I often volunteered to babysit my little brother so my friends and I could play with him!

I soon moved away from home to go to college, so I didn’t see him much after that. Sometimes I would receive mail from home that contained nothing but a crayon drawing. “Oh, this is from my brother, Paul!” I concluded, guessing that my mom didn’t have time to write to me, but still wanted me to get mail.

After I graduated, I worked at Woodland Altars Outdoor Education Center. I recruited Paul’s school and they came with a small group during a slow time for us in the winter. Paul’s fascination with birds was a welcome treat for all of the naturalists. He would see them all!  To this day, I always think of bracket fungi by the name Paul called them: Bird Tables.

My rare meetings with Paul after that have now become precious moments, and my distant relationship with him is now something I regret. Paul, the youngest of my nine siblings has now offered me the most challenging opportunity for gratitude of all. His choice to end his physical life when he was just 43 is now facing me with the biggest challenge for my openness to Radical Forgiveness. To be willing to be open to the possibility that even this happened for a reason, a spiritual reason, gives me the chance to “Use the tools!” as I have been encouraged by my teacher, Colin Tipping.

So, how do I go about applying the principles of Radical Forgiveness to this situation? The first step, as with any situation, is to “Tell the Story”. My “story” about my brother Paul is that I didn’t foster a relationship with him for the past 20 years, and even avoided him sometimes, believing that he wasn’t interested in me or my views of life.  The last time I talked with him was at my nephew’s wedding. I had heard just hours before that he and his wife were under police orders to stay away from each other. That had come as a total surprise to me! I had no idea that they were having such a hard time. I wanted to reach out to him now, but felt awkward and didn’t know what to say. I myself had come to that family gathering feeling a little shy about sharing my own drama of getting divorced. In fact, it was while chatting with Paul that I received the email from my attorney that said, “Your divorce was finalized on April 9.” That was literally the moment that I first got the news.  “How ironic,” I thought. “Here I thought that my divorce was a big deal, but that pales to the drama that’s unfolding for my brother.” I didn’t know then that I wouldn’t get another chance to talk with him, to support him, to be there for him like I hadn’t been before.

Next is to Feel the Feelings.

Well, that’s not hard! Sadness. Shame. Guilt. And anger, huge anger, at the other people involved who could have done something! THEY could have made his life better. There are no limits to the feelings in this story!!!

Stage Three. Diffuse the Energy of the Story.

OK, this is the Radical part, where I just have willingness, even just the tiniest, smallest bit of willingness to be open to the possibility that there was some sort of Divine Plan at play in this situation. I don’t have to know what that Plan is, or understand it, agree with it, or know why this had to happen this way. Well, I admit that I can allow that, even though the amount of willingness is infinitesimally small.

Stage Four. Reframe the Story from a Spiritual Viewpoint.

For this stage, the idea is to just make something up, since it’s impossible for me to KNOW God’s plan for this. This time, I think I’ll just say something vague like, “I don’t have any idea what God and Paul worked out for this to happen, but I’m open to the possibility that somehow it was Paul’s spiritual plan to live and die this way.  It’s giving a whole lot of people the chance to have some intense and deep feelings, that’s for sure! It’s a wake-up call for me to pay attention to my family and not make assumptions about how others are doing.  So, even though I don’t know what, why, or how this can be part of a Divine Plan, I’m open just a little bit, that there was a Divine Purpose, ‘cause there sure doesn’t seem to be a Human Purpose, being fulfilled by my brother’s early death.”

And finally, Stage Five. Integrate the Shift in Energy.

Surprisingly enough, I do feel a tiny bit lighter having written all this. I can write and share this, which is   integration at one level.  It’s a stretch for me to make sense of it from a human perspective, but the more I surrender to the mystery of Divine Purpose and open to the reality of our Spiritual lives superceding our physical ones, I can surrender to the idea that my brother, Paul, is alive in his Spiritual beingness.

So, where does the Gratitude begin? If Paul’s life has been an inspiration for me to surrender to God/Spirit as the ultimate purpose for my life, then Paul leading the way, choosing to leave his human form rather than continue on the path he was on, has been a powerful way to wrench me into accepting it. I can be grateful that his choice was an intense reminder to take care of my relationships and never miss a chance to reach out to others. I can be grateful that he’s giving me the chance to foster a new, Spiritual relationship with him, too. I hear bird songs more these days. I keep imagining that Paul has been sending me the birds to give voice to his spirit and remind me that God is present right here, right now.

Are you open to the idea that there’s a Spiritual Purpose in everything? Do you need words that explain this way of looking at the Soul’s Journey, our path from Spirit to Humanity and back to Spirit again? And would you like the script and worksheet for the five stages of a Radical Forgiveness process? It’s all in Colin Tipping’s book, Radical Forgiveness, Making Room for the Miracle.  Click the link below to visit the Radical Forgiveness Store and get your own copy! Then, join me in “Using the Tools” to find peace in your own upsetting situations, especially the ones that really don’t make sense from a Human perspective. 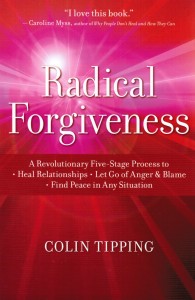