Since writing to you last, I have experienced something new for my life that I’ll never forget! It will also inform me for how I might choose my own Life’s path! For two nights, on June 25th and 26th, I held vigil for Colin Tipping, my teacher of Radical Forgiveness, as he lay in transition from his physical to spiritual life.  Reading Colin’s account of embracing his journey with cancer during the past couple of years, invites me to integrate the idea that death is truly a transition, not an end! For someone who has touched me and thousands of others so deeply with his life-changing tools, how could this possibly be an end?

During the nights that I watched and listened, noticing his breathing, his eyes, his slight movements, while listening with my heart to the intuitive messages I received, I felt more than a physical presence. Although others in the “Tipping Team” described vivid conversations with his spirit as he “traveled in the ethers” beyond his body, my sense was much more physical. However, I allowed myself to take to heart any ideas that popped into my head to be valid messages from Colin. A few times, I had the idea that holding his hand seemed right. So, I did. I would hold his hand, still quite warm, and whisper that we loved him and he was free to go when he was ready.

Wednesday night, I played a solo Satori game in his room, acknowledging his presence as if he were there as Satori Game Master and champion for my endeavors to share Satori with increasingly wider audiences. I affirmed that in December last year he had dubbed me “Custodian of the Spirit of Satori”, a role I heartily, though timidly, embrace! I assured him that I am proceeding judiciously and told him about my meeting with Godfrey O’Flaherty, new CEO of the Institute for Radical Forgiveness just a few days earlier.

On Thursday morning, I was grateful for the arrival of Colin’s companion, George, who had agreed to stay close to him during his actual passing and for a few days afterward. George’s presence felt relaxed, even jovial, checking in with Colin with casual remarks and pats on his head. I was surprised at this, ha 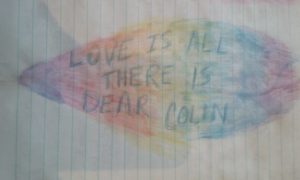 Message to Colin posted by Regina in the bedside log.

ving been encouraged to be quiet and keep touch to a minimum so Colin could stay out of his body! But, here was George, stroking his head, and joking, “Looks like your beard is almost as long as mine!” and “How are you doing, Bro?”  I was content to leave Colin in George’s care and move on to the next leg of my journey – driving to Ohio to spend time with my 91-year-old mom!  First, though, would be a day’s rest, trying to make up for the two all-nighters I had just pulled!

I didn’t know when Colin would actually breathe his last nor how I would find out when it happened.  I just knew that I had helped by being present for those two nights so the others could prepare for the true event! Now, my contribution was complete. How I did learn of his passing spoke of intuitive connections of the heart, though! Friday, at 10:37 p.m. I heard the ping of a text message. It was from my friend, and first Forgivenesswalks client, Wendy, saying “Wow! Colin Tipping…”

I replied, “Yes?” Her reply: “He died”.  She sent me the email, which I had not yet seen, that had gone out a few hours earlier to the Radical Forgiveness Community announcing his passing. How perfect that she had been the messenger, someone who had been one of the first benefactors of my Radical Forgiveness coaching ten years ago! Even though we have had only occasional

conversations and texts since we both moved away from Atlanta, here she was, sharing this momentous news!

And now you can read it too, if you haven’t already as a member of the Radical Forgiveness Community. Here’s what Shari Claire, Colin’s creative partner, shared about three hours after he died.  Be sure to watch the video that’s linked after her quote!

“Colin had his final healing today at 3:44 PM EST as he graduated to the other side of the veil. He was surrounded by his wife, Jo Ann Tipping, his death guide George Poirier, his Chiron Brothers, and JoAnn’s spiritual sisters. We had a beautiful ceremony with prayers, singing, and laughter as we sent Colin off to his next adventure. He asked that I share a video he made where he talks about his experience. It is informative and entertaining.”

Posted in Journey to YOUR HeartLand.