What would I feel when I crossed that road, meeting the spot where I had left the trail two years before? When I got there I could celebrate having walked all 2,175 miles of the Appalachian Trail. The spot lacked the drama of Mt. Katahdin or Springer Mountain, the geographic endpoints of the trail. My completion point was the crossing of VA state route 624, near Catawba. There’s no sign or plaque, no natural landmark or feature. Just white blazes on both sides indicating that the trail continues in both directions.

What did I do?

I cried. I burst into tears, saying “I’ve walked all of the Appalachian Trail. I’ve completed something that seemed really big. Now I can say, yes, I’ve walked the AT, in one short sentence.”

They were the kind of tears that well up unawares, like when my Dad showed up to pick me up from camp when I thought my friend’s dad would be there. Underneath was the belief that he would be too busy and I wasn’t important enough since there were so many other kids. This was like that too, only this time it was myself trying to stuff down the importance of this accomplishment, like there were so many other worthy accomplishments, why did this matter so much? Well, because it did, that’s all.
John, my hiking partner, took my picture. It’s a good thing it’s blurry because my face was all squeezed with crying, so my victory pose steals the show. It was dusk on a cold day and we needed to find our tentsite for the night, just like other nights on the trail.

In the morning we would continue south – toward John’s completion spot about 250 miles further at Damascus. I would keep walking with him, adding miles to my second traverse of the AT, ulimately going all 693 miles to Springer Mountain. For the night though, I could rest on my laurels of being an Appalachian Trail 2000 miler.

Today marks the tenth anniversary of that moment. I’m still walking trails with Hiker John, whose presence with me that day signifies one of the most dramatic changes my Thruhike initiated. My husband John had left the trail just two days before, having aborted his three-week time with me after just ten days. Hiker John had jumped back to walk with me again, planning to retrace the 180 miles he had covered while I had been walking with John.

Although I had thought I would finish the trail and then go back home to resume my life with John, in our hearts we had already taken separate paths. Stumbling along to our divorce is another chapter in our Inner Journey.

Today, I can remember and celebrate a completion along my way – becoming an Appalachian Trail 2000 Miler. 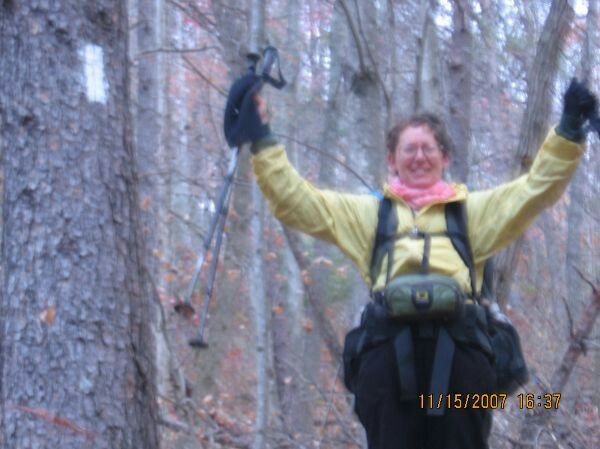 Posted in Appalachian Trail, Hiking, Journey to YOUR HeartLand.